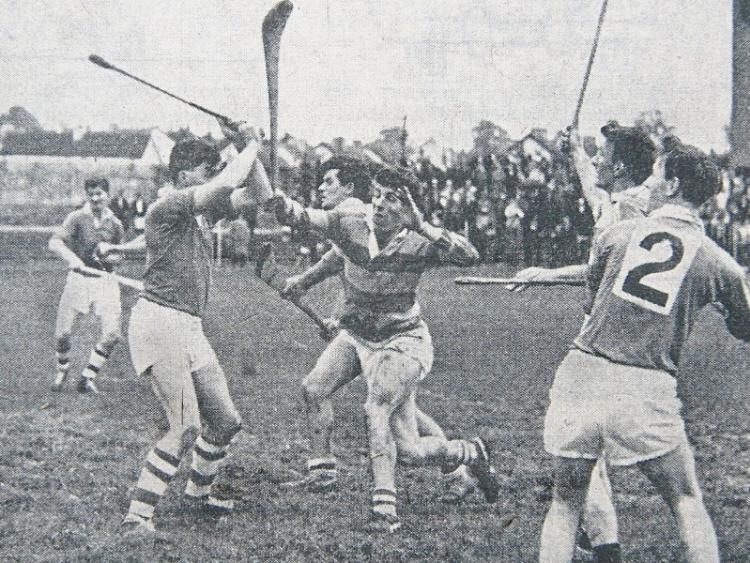 Mick Heelan (2), who is a selector with Kilmallock is pictured playing in the 1967 final

FIFTY years ago the Limerick SHC final needed a replay before Kilmallock beat South Liberties. 1967 was Kilmallock’s second senior title – with seven survivors from their maiden win of 1960.

Tthe replay referee was Noel Drumgoole, who months later officially formed Na Piarsaigh. The Balbec were captained to that ‘67 title by Mick Heelan – on Sunday he is a Kilmallock selector as they bid for title no12. ”I have had an unbelievably great career - six minor wins, six U-21 wins and a couple of seniors so hurling has been good to me,” he recalled of his coaching involvement with teams. As a player he won two Limerick SHC medals. “I won in our first one in ‘60 and then in 1967 I was captain. We lost in ‘62 and again in ‘70,” said Heelan. ”I get great enjoyment out of it and it’s a pleasure to be involved with Kilmallock and always was.”

County Final day has certainly not lost any of his it’s appeal for Heelan.

“There is nothing like it – it’s great to be there and all these days are special days,” he said. He adds: ”It’s the focal point of Kilmallock - hurling is always very important in Kilmallock”.”In the Fairgreen, as we call it, everyone grew up with a dream of wearing the Kilmallock colours and playing hurling.”

”Life has changed and culture has changed and you could say it was a way bigger deal then - when I started playing hurling with Kilmallock first we all had to cycle into the Fairgreen. Crowds were huge back then, even for tournament matches. Time has moved on and culture changed and people travel all over the world and it’s not as big a deal,” explains the Kilmallock selector.

What of 2017? ”The big thing was to get back to the semi final - we felt, with all due respects to Patrickswell, we left it after us last year. The big target was to get back there and get over it,” he said.

”We had a very nervous start in that semi final (v Patrickswell) but we pulled ourselves and had a bit of daylight by the finish. We had been idle for a long time and no matter how many challenge games you play or how good the opposition is, the same cut and trust isn’t there as a championship game and we were slightly concerned because The Well had two good games against Ballybrown.”

”The records speak for itself - we have three each in the last seven years. Without a doubt, two very good teams. At the end of the day, it’s all on the day and anything can happen. It’s who brings the most to the table on the day,” said Heelan.