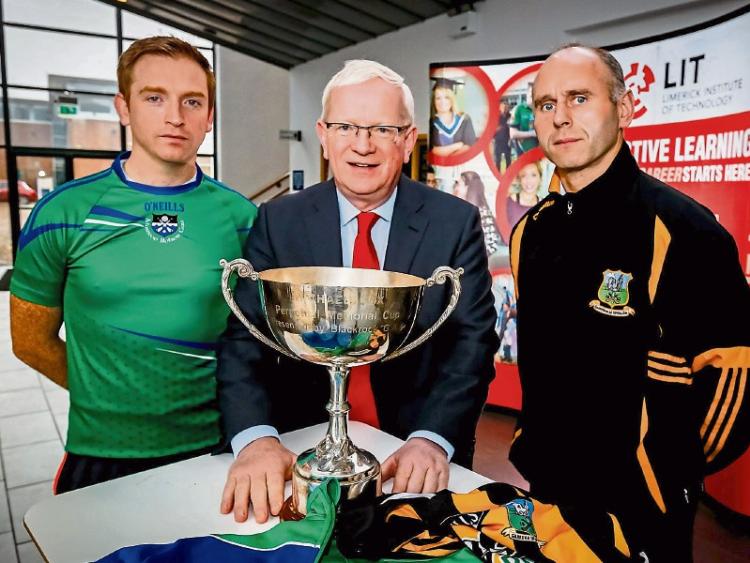 MURROE-BOHER were promoted to the senior ranks in 1999 with a Limerick IHC final win over Knockainey.

They remained senior until last Autumn with two Limerick SHC semi final appearances the highlight of their 17 year stay in the top flight.

On Sunday, they bid to make an immediate return to the top - albeit this time with a Premier IHC title.

Pat Tobin remains the only survivor in the starting team and captains the team into the Gaelic Grounds.

Pat will be joined in the starting team by his brother William in goals and Seanie joining him in attack.

This Monday, William attended LIT for the media launch of the championship final.

”It’s 18/19 years now since we won it in ‘99 and we played senior since so it’s going to be great if we manage to come home with the cup – senior status is the carrot. It’s never nice to be relegated - you just have to keep the anger and bottle it and use it on the day,” outlined William Tobin.

”At the start of the year you are just concentrating on the first game and the second game and so fourth - the league part was a success for us, Garryspillane the only side to beat us in that,” outlined the goalkeeper of their first encounter with the seven group game format to the Premier IHC.

“Each game, individually, were tough battles - from our first game against Mungret we took no game for granted and we couldn’t. They were all dogfights and the final will be the same,” he said.

“It’s a long year, I know it’s the same as the senior but you play more matches. We have come through it well - this intermediate championship is a tough championship. Look at it and there have been teams that started well and others that finish well but it’s about keeping it going throughout the year.”

The Tobin trio and Seamus Hickey provide the experience but largely this is a youthful Murroe-Boher outfit and that’s the way they want.

”Experience can only do so much for you - this year we are really looking to our younger players. It’s them that are really pulling the older lads through and hopefully they can do the job again,” said the goalkeeper.

”They are the lads with the legs - I’m not going to get around the field like those lads anymore!” he joked.

”We will look to those lads and the Gaelic Grounds is a big field and they will have to carry the ball – I don’t think it will daunt them too much,” he said, referencing the occasion of a Gaelic Grounds final for a young side.

The young legs come in the shape of Jack Casey, Conor Byrnes, Ross Kennedy, Brian Timmons, Darragh Kennedy and Dylan Sheehan, among others.

”It’s going to be a tough battle and Garryspillane will expect the same from us. We hope to come out with the win - things are going good and we have trained well. We are here now and have the work done and will hopefully get the job done on Sunday,” said Tobin.

”We played Garryspillane over the years and had many battles up senior and they are still the same Garryspillane - tough, experienced and we know what to expect,” said the long serving goalkeeper.