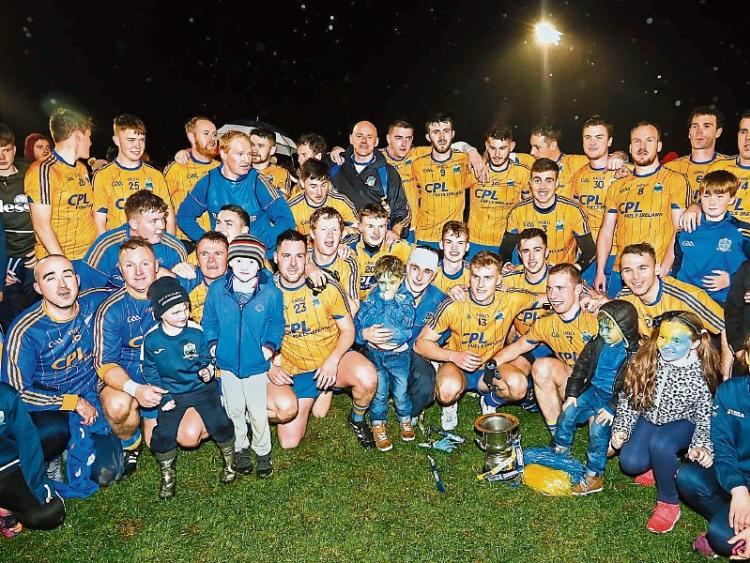 FINALLY the wait for a return to senior football came to an end for St Senans. They endured some hard days since they fell from senior status but it’s a measure of the club and its players that they kept focus despite repeated losses.

Playing a County final under lights and with an 8.15pm starting time raised the eyebrows of many. Surely this game deserved a better billing and the many people that traveled had no protection from the wind and rain that swept Neville Park in Rathkeale.

The inclement weather made it difficult, but credit to the players of both St Senan's and Galbally for the manner in which they played the game.

Referee Trevor Mann also played his part and while some found it easy to question some of his decisions he did a fine job. He allowed the game to flow and used common sense and that always helps to get the best from players.

A glow of illumination hung over the West Limerick town as people huddled together by the steel railing. Those that had an umbrella suddenly found friends and overall the atmosphere was very good. They travelled in good numbers from both parishes and it was evident that the pride and importance of the club has not diluted in anyway.

This will be remembered as a game of two halves and while St Senans held out, they will be the first to acknowledge the contribution Galbally made to a fine game of football.

Senans held a comfortable lead at halftime but just like many times before Galbally are not the sort of team to toss in the towel that early. They showed true metal to not only find a way back into this game but they almost pulled off what would have been one of their greatest wins.

It can’t have been easy for Galbally at halftime. They trailed Senans by 3-7 to 1-4. The hill they had to climb would test the ability of any team.

For Senans, those three goals by Darren Kavanagh and Conor Mullane rocked Galbally and provided the foundation for victory.

The West Limerick men were flying. With every journey up field they carried menace and created more opportunities than they took.

St Senans had a very strong centre line, from Anthony Russell in goal to young James Bridgeman at full back, Ian Ryan at centre back and Darren Kavanagh at centre forward and the experienced Conor Mullane at full forward.

Senan's have developed some young players over the past few years and many of them made a huge contribution to this win. At halftime the banter was good. Lads were giving out about the time of the match and with that Michael Finucane (Former TD) was fast off the mark and said,”It could be worse, sure hadn’t the ladies to play at 9 in the morning.”

Some battled hardened Galbally supporters were trying to figure out where it went wrong and how they could bring themselves back into the game. They raised questions but they had few enough answers. Few of them held the view that they could find a way back. To make matters worse for Galbally losing James Ryan to injury added to the task they had.

To the credit of the team they found a way back, they dug deep and answered the questions raised at halftime.

Quite simply, Galbally dominated the second half, they had Senans on the run and now the outcome of the title and promotion looked a long away off what most people felt at halftime.

The impressive Gary McCarthy had an early point for Galbally and that was followed by a great goal by Kieran Hickey.

St Senans lost their way, they retreated and became very defensive. They lost the confidence they had in the first half. They were now kicking aimlessly and lacked the direction and composure they had in the opening half.

Pressure and hard work will unhinge and upset most teams and in this regard it was having the desired effect for Galbally. Further points from Jack Donovan, Nathan Byrnes and Gary McCarthy cut the margin to two points. At one stage more than a sense of panic had crept into St Senans play. They were struggling and Galbally knew it. The game was in the balance, and with the majority of the second half played Senans were still looking for a score. Young Richard Hayes took them out of their misfortune when he landed a great point and the same player hit the target again and that was the turning point they needed. Adam Kearns added a goal after a good move up field by Ray Flaherty. That score came in injury time but it allowed both the team and supporters of St Senans to finally believe the wait was over.

Galbally came up just a little short but given the start they had their recovery was remarkable. For St Senans this was a night to remember and for the manager Damien Fitzgibbon it would have meant a great deal.

I’ve had the pleasure of working with many players but the one man that will always stick out is Damien Fitzgibbon.

Injury affected his career on many occasions but he never allowed it come in the way of giving his all for the club. His passion for football, parish and club is unequalled and it was fitting that he was leading this group. Sean Kelly also did great work as coach while John Hanlon and Pat Shaughnessy were well qualified selectors.

So many have played their part in St Senans. People like Niamh Finucane has worked tirelessly, Maurice O’Mahony likewise and along with others have developed the underage system. Bernard Enright is always willing to pull his sleeves up. One man that has given great service to the club is Michael “Milo” McMahon. His heart and soul is in St Senans and he will have taken great pride in this win. People like Vincent Kelly and Michael Mullane have given a lifetime to the club but they will be the first to say that the club has many great people that have given much in the past and currently. The most inspiring man in the St Senans club is Joe Ryan. He is the person that has given much and provided motivation for many in this West Limerick club. Senan's are back and that will shorten the winter for players and supporters.

Garryspillane have enjoyed a great year so far and it could get better next Sunday when they face Murroe Boher in the Premier Intermediate final.

That game will take care of itself but their win over Mungret St Paul's in the Premier minor final was very special.

Winning this championship at this grade will set a foundation that will serve the club long into the future.

Garryspillane won this game long before last Saturday, they won it over the past few years when they put huge work into those players at underage level.

They have always produced hurlers and it’s great to see this club very much back on track again.

They have a strong club led by some great officers. They can be very proud of this win and if they add the Intermediate title to it next Sunday it will truly be a great year for Garryspillane.

It promises to be a big week in local GAA and I hope we have a big crowd in the Gaelic Grounds next Sunday and that we most of all have a great senior final between Kilmallock and Na Piarsaigh.