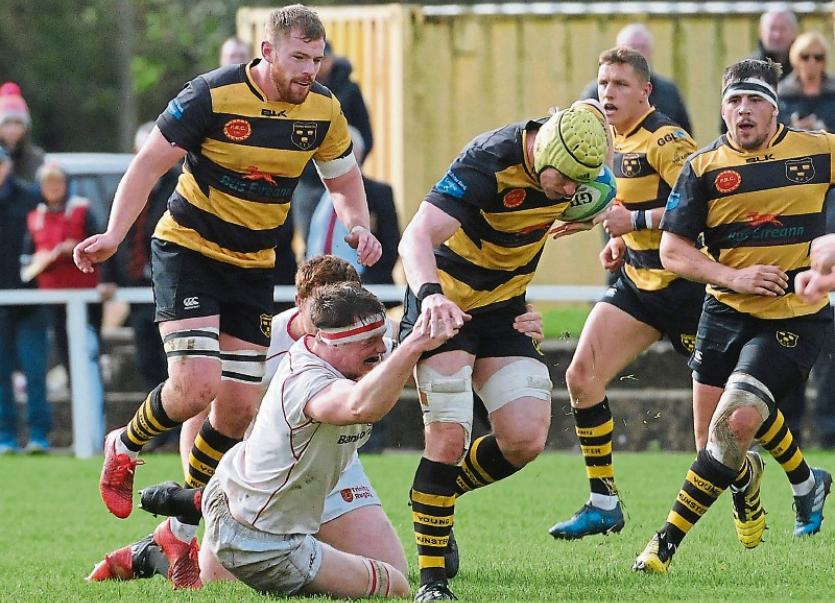 Those wins for Shannon and Old Crescent took the Limerick clubs to the top of their respective divisions, 1B and 2B.

In Division 1A, both third-placed Garryowen and Young Munster, now in eighth place, suffered frustrating losses.

Garryowen managed to take a losing bonus point from their 27-20 defeat to leaders Terenure College in their top-of-the-table clash at Lakelands.

Garryowen, who trailed 7-10 at half-time, had tries from Hugh O Brien Cunningham and JP Phelan.

The ‘Light Blues’ lie seven points behind leaders ‘Nure and one adrift of second placed Lansdowne who play on Sunday.

Meanwhile, Young Munsters’ fell to their three defeat in four games, when suffering a heart-breaking 21-17 defeat to previously winless Dublin University at Greenfields.

Munsters’ had led the game 14-0 after 25 minutes with tries from Tom Ryan and Ben Kilkenny, both converted by Shane Airey.

Munsters’ maintained a 14-3 lead to half-time. However, while the home side managed just three more points in the second half from a Shane Airey penalty, the Dublin students racked up 18 points, including two tries.

Munsters’ had to be satisfied with taking a losing bonus point from the game.

In Division 1B, high-flying Shannon sit top of the table after making it four wins on the bounce when thumping Dolphin 52-0 on the back pitch at Thomond Park.

UL-Bohemian came away empty-handed from their long trip to Ballymacarn Park after suffering a 34-17 defeat.

In Division 2B, Old Crescent’s excellent start to the season continued as they edged Wanderers 20-19 in their top-of-the-table clash at Rosbrien.

League leaders Crescent made a blistering start to lead 13-0 after just 10 minutes with tries from Cathal O’Reilly and Cathal Monaghan. Ronan McKenna chipped in with a penalty goal.

However, Crescent’s half-time lead was down to a point, 13-12, with two tries, one of which was converted.

Indeed, a Niall O’Donoghue try soon after the restart had Wanderers 19-13 in front.

Crecsent regained the initiative and the lead when Val McDermott struck for their third try which McKenna converted.

The home side managed to maintain their 20-19 lead to full-time.

In Division 2C, Bruff are third in the table on the back of an impressive 39-10 bonus point success away at Tullamore.

Bruff had tries from Brian Fanning on 10 minutes and just before half time for a 15-5 interval lead.

A third try on the hour mark from Tony Cahill helped the Kilballyowen Park side into a commanding 25-10 advantage with a quarter of the game to run.

Eric Finn notched the fifth try for the Limerick side late on, following a break by Cian Ryan.

Also in Division 2C, Thomond went down to a 36-14 defeat away to Bangor with the Limerick side shipping five tries.

Thomond remain a comfortable fifth place in the table after winning two of their opening four AIL fixtures.

The Fitzgerald Park side had tries from the flying Dara O’Neill, who managed a brace. Both tries were converted by Evan Cusack.

After four successive weekends of fixtures, the Ulster Bank League now takes a break for Limerick sides until the weekend of Friday, October 27 and Saturday, October 28.