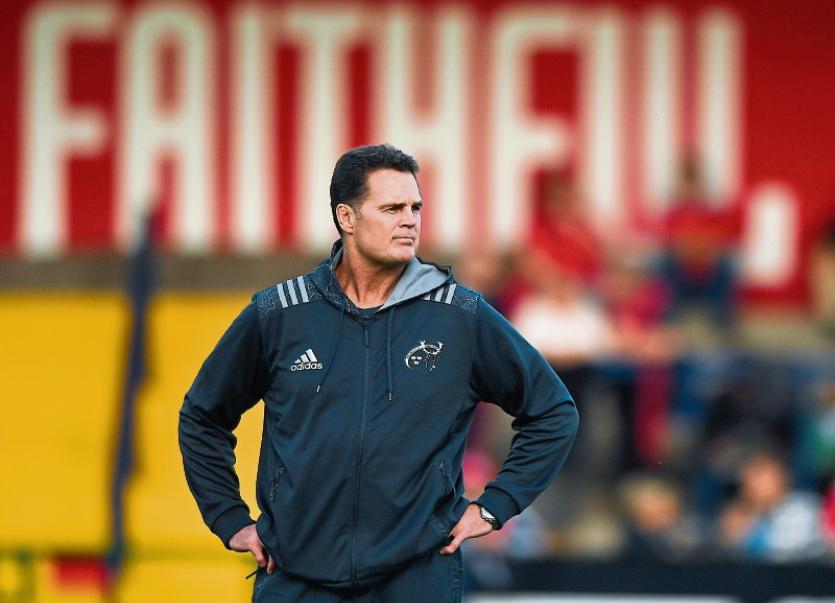 Rassie Erasmus who was disappointed with his side's performance

MUNSTER's Director of Rugby Rassie Erasmus described Friday night’s performance against Glasgow as the poorest he had seen during his time at the province.

”Look it was probably our worst performance in the last 40 games,” Erasmus said.

”We work together, and it shouldn’t be any excuses or looking for any excuses it was just a really disappointing performance from the players and obviously us as coaches during last week. To pitch up in a game like that wasn’t a good week.

“I think one can find a few excuses, but I think if you play like that you shouldn’t look for excuses. I think it’s in the top inches.

”From my side, from a coaching side, I thought we were up against it against Glasgow away, with picking the same team four weeks on the bounce. It was probably taking a big risk but definitely don’t think it was a 20-point risk, that’s a good hiding.”

Meanwhile Munster will welcome their British and Irish Lions trio of Conor Murray, CJ Stander and Peter O’Mahony back into their matchday squad for Saturday’s crucial Guinness PRO14 clash with Cardiff at Thomond Park, 1.30pm.

However, a groin issue could delay Ireland winger Keith Earls’ making his first appearance of the season for the province this weekend.

The return of the Lions trio of Murray, Stander and O’Mahony is a boost to a Munster squad sure to be smarting from their 27-point thumping suffered at the hands of Glasgow Warriors in Scotstoun last Friday night.

Departing Director of Rugby, Rassie Erasmus said: “We’re not 100 per cent sure about Earlsy (for this Saturday). I think he's fit to play, but he's only really taken part in our on-field team sessions since last week.

“Definitely Earlsy next week (v Leinster) and the other three (Lions) will be in the mix this week. That's the plan.”

Munster look set to have JJ Hanrahan in their matchday squad for the visit of the Cardiff Blues after he featured for his club side UL-Bohemian in the Ulster Bank League at the weekend.

Hanrahan’s first outing for Munster since his return to the province from Northampton Saints this summer has been delayed due to a shoulder injury.

Elsewhere, on the injury front, in-form second row Jean Kleyn is due to meet with a specialist as a neck issue he sustained against Glasgow requires further investigation.

New second row signing Mark Flanagan linked up with the squad on Monday.  The former Leinster lock joins the province from Saracens on a short-term loan deal and could be pressed straight into action this weekend against Cardiff.