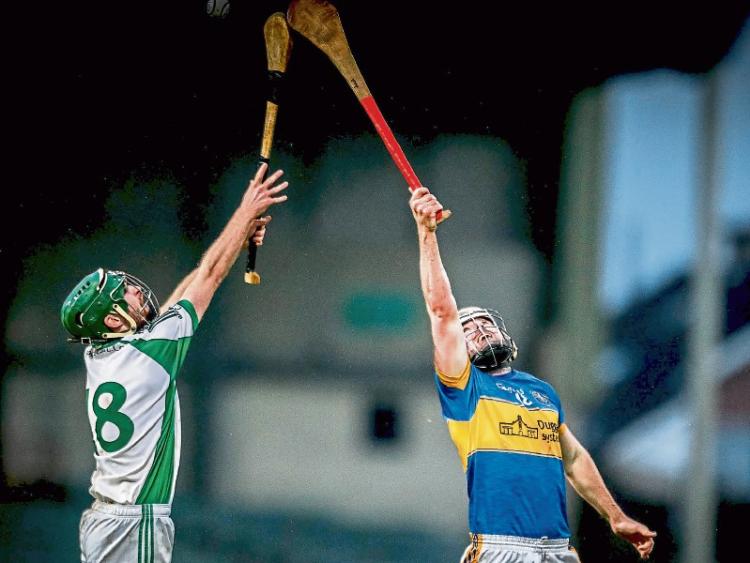 Action from today's quarter final replay between Patrickswell and Ballybrown

Champions Patrickswell made no mistake second time round to book their place against Kilmallock in the semi finals of the Credit Union Limerick SHC.

The Well won this quarter final replay 0-17 to 0-13 in the Gaelic Grounds against a Ballybrown side that played the entire second half with 14-men.

At half time, Ballybrown were 0-8 to 0-6 ahead in the Gaelic Grounds.

The Well actually started the better with Kevin O’Brien and Aaron Gillane scores helping them 0-4 to 0-1 ahead by the 11th minute.

But Gary Kirby’s men were to score just twice more in 20-minutes of play – both Gillane frees.

Bit by bit Ballybrown got on top.

Alan O’Connor, Josh Adams and Mark Sheehan scores saw them hit the front, 0-5 to 0-4 on the 21st minute mark.

Gillane broke their run of scores but O’Connor and Richie Kenny points soon had them 0-8 to 0-5 clear.

But in the 29th minute Ballybrown were reduced to 14 men with Man of the Match from the drawn game Ross Griffin getting a straight red card for a challenge on Diarmaid Byrnes.

The half ended with a fourth Gillane free to leave the Clarina men two points ahead at the break.

With 11-minutes to play the sides were level for the sixth time, 0-12 each.

But the extra man then told as Patrickswell finished with five points and just one in reply.

Alan O’Connor hit with a free but the goal that Ballybrown needed never came.

*See the print edition of the Limerick Leader for a full match report.