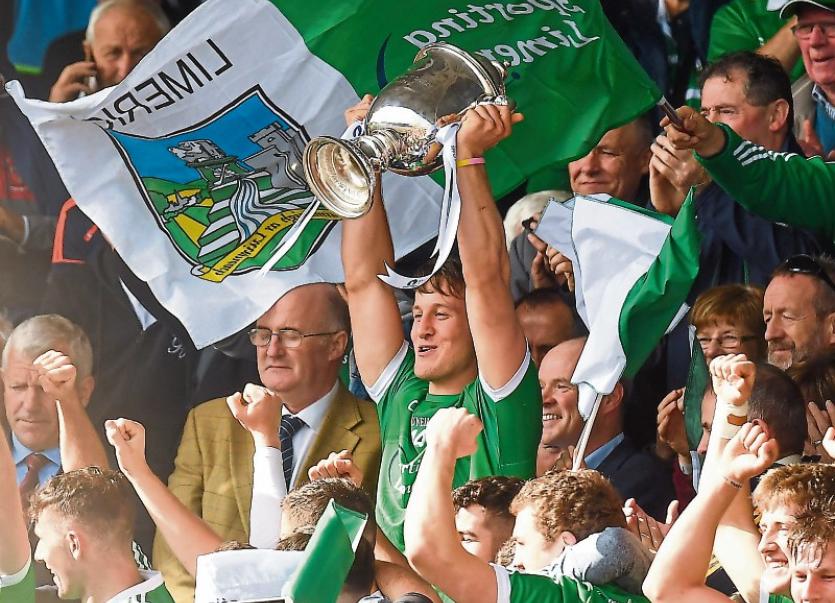 AS the clock ticked towards the 64th minute in Thurles last Saturday the Limerick supporters had already made their way on to the pitch. They came from all corners to greet a win over Kilkenny in the U21 All Ireland final.

It was only then that we fully realised the magnitude of the support Limerick had in the crowd of 15,485. As a contest this will not be remembered as a game of quality but all too often Limerick played in great games and lost.

Most Limerick supporters have few memories of beating Kilkenny at any grade, but this time round there was little doubt who the better team was. Limerick were smarter, sharper and just better hurlers.

I was surprised how poor Kilkenny were. They lacked quality in many areas and only for a brief spell did they trouble Limerick.

It was a difficult day for hurling, powerful winds blew from left to right and while Limerick were ahead at halftime they should have made better use of the possession they had. They hit some poor wides and allowed Kilkenny hang on a thread.

Limerick worked hard, they had the better of Kilkenny in nearly every position and at no stage could you say they looked like getting a grip on this game.

The last time these teams met was in the All Ireland minor final of 2014 and twenty four of the players from both sides were involved last Saturday. Limerick have added a couple of players, Kyle Hayes was minor last year and has made a significant contribution to the Limerick senior and U21 teams this year.

Many of the Limerick players have progressed while the same cannot be said of Kilkenny. They were sluggish, slow and lacked the hurling flare we would associate with Kilkenny teams.

It shows the well has somewhat dried up and their journey back to winning senior titles will not be easy.

Limerick won the toss and they rightly played with the strong wind. By the opening quarter they were ahead 0-7 to 0-1. Kilkenny didn’t really have an answer to them. They were well beaten around the centre and struggled to win clean possession.

Limerick showed a willingness to work and time after time they tested Kilkenny. They should have landed more points but despite all of the possession they had they never once really looked like they could score a goal.

Aaron Gillane had landed five points by halftime, he was given lots of space but he always had the better of the various men that marked him. Cian Lynch was a doubt before the game with a hamstring injury. To his credit he turned in a superb first half display. He caused all sorts of problems for Kilkenny and they never came to terms with his movement and vision.

He scored only one point but scores alone would not quantify his contribution in that first half. He had to leave the game early in the second half but by that stage he had his work done.

From a performance point of view some Limerick players never got into the game and that was surprising given that Limerick were well on top.

Tom Morrissey has had a difficult enough year but as I have said before his position is full forward. He has good hands and has more to offer Limerick. He has given a lot to Limerick teams from a young age and he was a fine captain of the team.

Barry Nash also was less dominant than normal but I have little fears for him. He will cut the mustard. Sean Finn also struggled.

While Aaron Gillane got 'Man of the Match' I think two other players were serious contenders. Robbie Hanley gave his finest display in a Limerick jersey.

He worked really hard, took the game to Kilkenny and dominated midfield in the second half. When Kilkenny looked like they had a bit more to give it was Kyle Hayes that took charge. This young man is a smart hurler, he is brave, covers the space well and is getting better with every game.

He has to be the best option Limerick has as a centre back now. For sure he has more miles to clock up in this position but for me he is the man that lifts the team and the supporters in the stands.

I said before a ball was hit in this championship that Limerick would win it and I am delighted that they have done so. As a unit they were just better than the teams they came across.

This win will give great confidence to a lot of them but the facts show that only a percentage of them will go all the way at senior level.

By that I mean a player that consistently delivers on the stage and not just part of a panel. One young man that has had a good year is Darragh Fanning. With little fuss he has been commanding at full back. This win will have meant a lot to him.

The opening ten minutes of the second half was mediocre stuff, I expected Kilkenny to bring more to the table. Now admittedly the wind had dropped somewhat but that aside they failed to bring the drive and dash I think most people expected.

Limerick needed to freshen things up a bit and the introduction of Conor Boylan gave the attack a bit more bite. He caught a few good high balls and also scored a point when a goal looked really on.

Peter Casey hit a few good points and he had to show his full range of skills to steer some of them over the bar. His club mate Ronan Lynch also did well and landed a couple of long range points from frees.

Winning lifts the hearts of all in Limerick hurling but we must be mindful and put the win into context. We have been down this road before and it will take a huge effort from the players themselves if they are to enjoy success at senior level.

Underage success is no guarantee of success at senior rank. We have produced so many great young players over the last twenty years but so many of them failed to come through.

Why was that? Was the system wrong? Did they fade away with weaker clubs? Did the management of senior teams put them in too early?

The answers will be many and the questions could go on but now is the time for Limerick to really start getting it right.

If any one of those players think for one minute that they have arrived as senior hurlers and they have all the tools to go forward then they are greatly mistaken. Good hurlers many of them are but it takes more than hurling to win All-Ireland senior titles.

Limerick have never quite got the formula right but those in charge of the senior team now need to spend the next few weeks getting a plan for the future development of these players in place.

The County Board also needs to put the win in context. Celebrate it yes but have the leadership to put away the cup.

It was chilling to see what the win in Thurles meant to young Limerick supporters. I met many of them, boys and girls joined the adults on the pitch which was a sea of green and white.

It took a lot of effort from parents, various management at club and county to get the players to where they are now. I would love to see this group go forward now and develop themselves to the max of their ability.

Leadership is a choice and I just hope that all concerned with Limerick hurling will make the right calls and that will ensure more special days like last weekend.