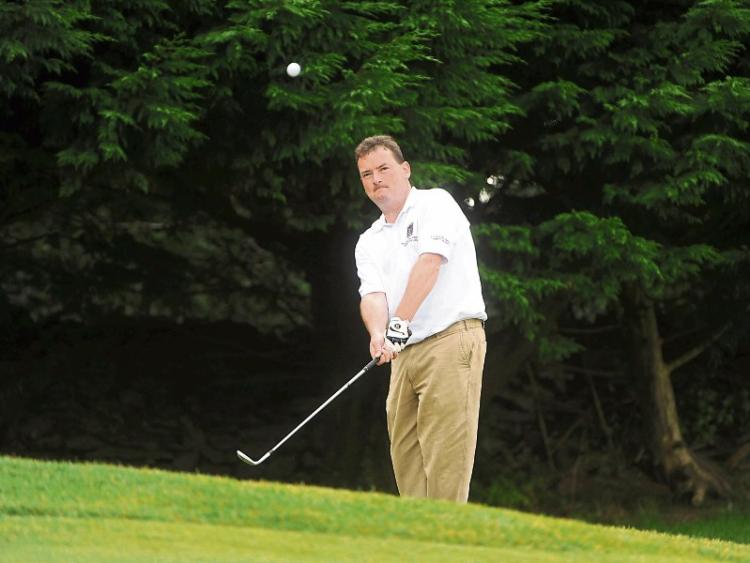 IT isn't every day of the week that a Limerick man returns home to his native city as a proud European Champion.

Eamonn Haugh was gutted last year when he won the Irish Seniors Close Championship and was subsequently passed over by the Irish selectors.

This year, Eamonn did get the call, which was an honour and a proud moment for his family and Castletroy Golf Club where he learned to play golf as a youngster.

"From the beginning, I was welcomed into the squad by my team mates especially veteran internationals, Garth McGimpsey and Adrian Morrow. They called the tune and set the tone. It was quite obvious they meant business and wanted to win.

“I was very nervous during the stroke play qualifying rounds at the PGA National Golf Course of Sweden near Malmo but delighted to contribute to Ireland finishing in joint first place with Scotland. The match play format by which the championship is decided consists of one foursomes pairing going out at No. 1 followed by four singles matches.

“I was paired with Tramore's John Mitchell and asked to lead the team against the homesters, Sweden. John and I got off to a fantastic start and never let up, winning by 5/4. That got rid of the nerves - pronto!

“We played England in the semi-final and once again, John Mitchell and I started our match very well and never lagged behind, eventually winning by 3 and 2. The final was a tense and close affair. The weather conditions deteriorated, which turned the already difficult golf course into a monster.

“John Mitchell and I became embroiled in tight battle against another Scandinavian side, Denmark, but hung on grimly to our early lead to notch up our third win and finish the week with a very satisfying 100% record.

“We then went back out in the wind and rain to support our team mates. Jim Carvill (Banbridge) lost a high quality match at the first tie hole and Garth McGimpsey (Royal Portrush) was also beaten.

“Karl Bornemann (Douglas) kept the Munster flag flying and the score was 2-2 with Adrian Morrow (Portmarnock) approaching the 18th all square, which was halved thanks to the Dane missing a tricky 6-footer for the game, match and championship.

“The 19th and 20th were halved but at the 21st Morrow showed his experience and class by holding up a delightful wedge against the wind that set up a winning birdie putt. I felt like pinching myself but it was reality. It was a wonderful experience to be part of a group of players and management, that worked tirelessly for each other.

“The course was difficult and the weather wasn't the best but we got the result we wanted which was the main thing - the only thing. I could not be prouder or happier!"

THEAIG/GUI Cups and Shield All Ireland finals take place at Carton House in County Kildare next week from Wednesday to Saturday. As Munster champions, Ballybunion and Limerick Golf Clubs will be contesting the Junior Cup and Senior Cup respectively.

Ballybunion, who won the title as recently as 2013, and with only one team member (Frank Geary) still playing golf at this level defeated a stubborn Ennis outfit in the Munster final at Tralee.

The other members of the Ballybunion on that occasion were Philip Byrne, James O'Callaghan, Ronan Cross and Brian Slattery. On Wednesday at 11am, Ballybunion will meet the Connacht champions, Loughrea to decide who will face the winners of Malone and Grange in the other semi-final.

A big following is expected to travel in support of Limerick GC in the Senior Cup on Friday (8.45) knowing they will be up against it in their semi-final with the Leinster winners, Carton House, playing on their home course.

The Limerick team will probably line out as they did for their Munster final victory over Ballybunion: Owen O'Brien, Mike Reddan, Ciaran Vaughan, Sean Poucher and Justin Keogh with two of last year's All Ireland winning Fred Daly team, Morgan Hanley and Luke O'Brien, acting as the substitutes, if necessary.

"We know we have our hands full playing against the home team but playing on your own course doesn't always work in one's favour. So, we will get stuck in and give it our best shot.

“If the match is tight entering the final six holes, anything can happen," says Ger Vaughan, Limerick's vastly experienced Team Manager. Royal Portrush and Galway are the other semi-finalists in the senior cup.

There are few golfers wiser than Paul McGinley. Last week he spoke publically about Rory McIlroy's alarming slide down the rankings. The question is - why has McIlroy lost his edge on his rivals? All we have to do is look at the statistics. He doesn't outdrive everyone by 30-yards anymore and his proximity to the hole is inferior, very inferior - especially with his wedge shots. He is ranked 47th in that category. A bit of hard work will cure that deficiency, I'm sure. Too many golfers prefer to work on their perceived strengths instead of their weaknessese. If I could be permitted to add a bit advice of my own it would be - reduce visits to the gym. You don't need muscles to hit wedge shots close. You do it by delicately controlling the distance you hit the ball.