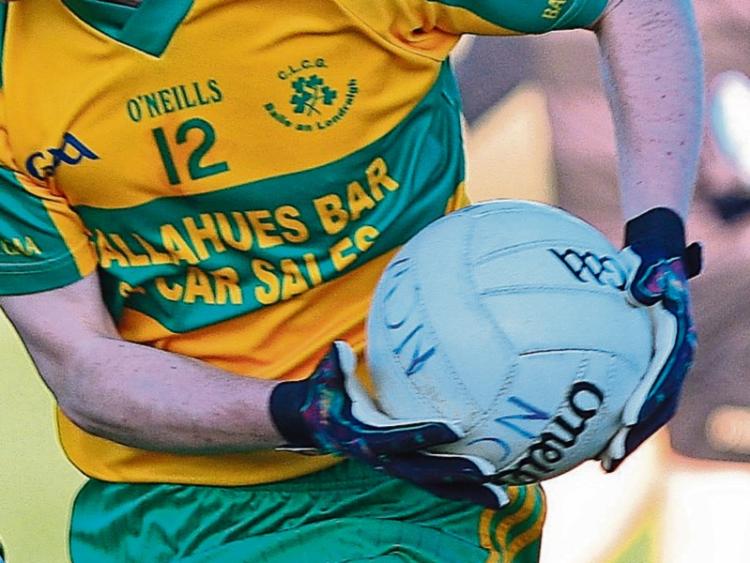 It finished Adare 1-13 Ballylanders 4-4 in Kilmallock.

Adare led 1-7 to 1-3 at half time after dominating possession.

While the south Limerick side got a greater foothold in the game in the second half Adare looked the likely winners but Ballylanders kept finding goals.

Adare were four points clear inside six minutes but Ciaran Kelly had the first Ballylanders goal in the game’s seventh minute and by the 10th minute his side were 1-2 to 0-4 ahead.

But the Adare dominance continued and just before half time Stephen Keeley goaled from the penalty spot.

Twelve minutes into the second half Kieran O’Callaghan had the second Ballylanders goal to leave it 1-8 to 2-4.

Robbie Bouke and Jack English hit back with Adare points but then came another goal – this time Ciaran Kelly again.

Again Adare settled and points from Hugh and Robbie Bourke looked to have won it until O’Connell palmed the ball to the net in the game’s 61st minute.

So Dromcollogher-Broadford must wait to learn their semi final opponents.

The other quarter final – Monaleen v Oola – takes place next Thursday evening in Kilbreedy with Newcastle West awaiting the winner in the semi final.

Elsewhere over the weekend, Claughaun advanced to play Gerald Griffins in the semi final of the Limerick IFC.

The city men had a 1-11 to 2-6 win over Mountcollins. Despite an early Patrick Delee goal for Mountcollins Claughaun were 1-5 to 1-3 ahead at half time. Kyrin McGarry were the Claughaun goal.

Also in the Limerick IFC, Cappamore were relegated to the junior ranks after a 2-15 to 2-5 defeat to Glin.

Glin were 1-8 to 0-3 ahead by half time with Gary Culhane kicking five points from play in the opening 30-minutes.

Karl O’Sullivan had a goal in either half for the winners. Eamon Gleeson had two second half Cappamore goals but Glin maintained their status with a deserved win with Culhane (0-6) and Padraig Scanlon (0-4) leading the way for a side that scored 2-14 from play.

*See the print editions of the Limerick Leader for full match reports on all three games.