Positives to be taken from weekend of tournament action 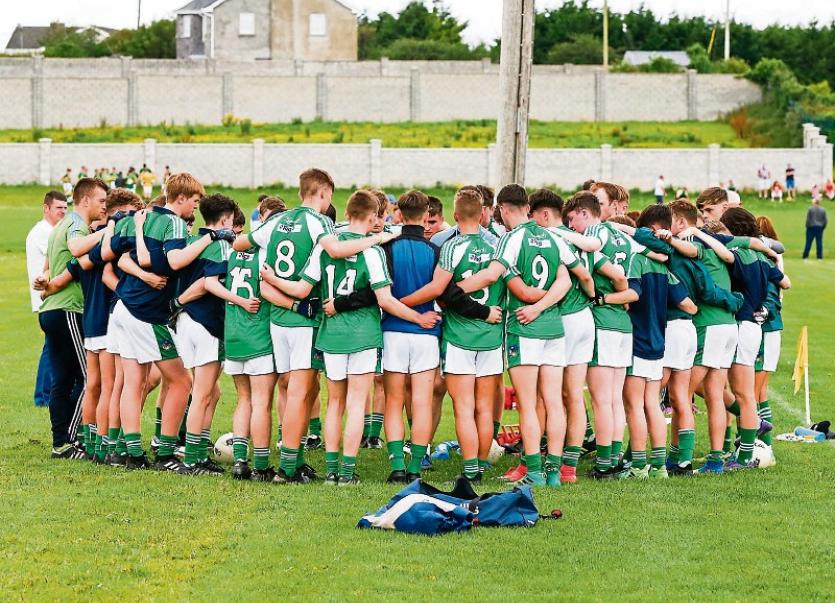 Limerick U/16 Academy side who were defeated by Kerry South

THE Limerick U-16 footballers provided a timely boost to the County Underage Academy this Saturday when reaching the final of the John O’Donovan Cup – the provincial final.

However defeat was their lot in the Munster Final and defeat was also the lot in all games for the county U-14 and U-15 footballers in their respective annual competitions on Saturday.

The U-16 footballers beat Waterford and Tipperary to reach the final against Kerry South – all games took place in Rathkeale’s Mick Neville Park.

In that semi final Limerick had a superb Paul O’Shaughnessy first half goal but trailed 0-8 to 1-3 at half time.

Midfielder John Hayes proved the match winner with the game’s final four (one from play) points to edge Limerick into the final.

However, the U-16s, managed by Andy Lane (St Senans), Pa Ranahan (Ballysteen), Seoirse Laffan (Na Piarsaigh), Diarmuid Carroll (St Kierans) and Seanie Buckley (Dromcollgher-Broadford). were the only side to win a game.

At U-14 level in the Waterford based Jim Power Tournament, Limerick lost all three group games. Cork North had a 3-13 to 1-5 win, Tipperary won 3-4 to 1-4, while Cork West were 5-8 to 3-5 winners. Tipperary won out the competition, beating Kerry South in the final.

In the Cork based Humprehy Kelleher Tournament, Limerick U-15s lost both group games. Losing to Tipperary 5-6 to 0-4 and Cork Reds 1-6 to 1-2. Kerry South win the U-15 competition.