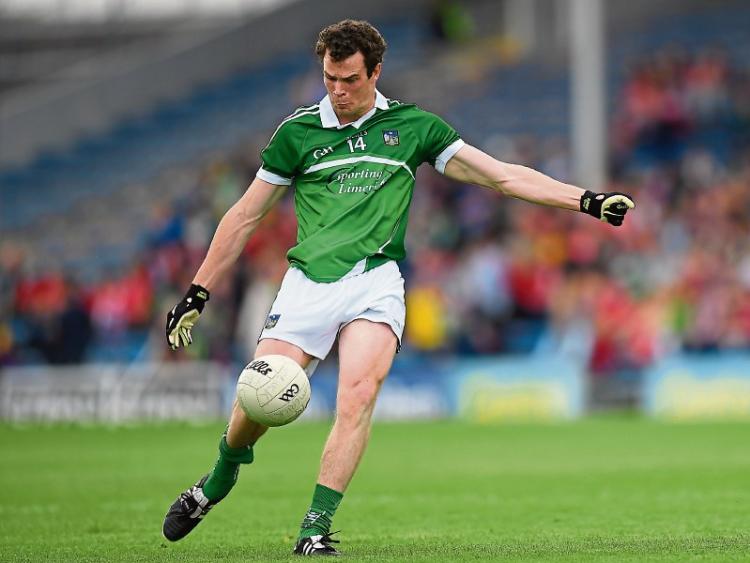 STALWARTS Ian Ryan and Seanie Buckley have returned to training with the Limerick senior footballers in an ideal pre-championship boost.

But they aren’t in line for starting roles this Sunday (3.30) in the Munster SFC quarter final against Clare in Ennis’ Cusack Park.

Neither played a role in the seven rounds of the Allianz Football League or in two recent challenge games against Laois and Wexford with Ryan out due to a hernia and back injuries, while Buckley was sidelined with a knee injury.

”It’s great to have both of them back on the training ground and I know the boys are delighted to have them back because they bring a wealth of experience and have been fantastic servants to their clubs and county and set the standards in terms of dedication,” confirmed Limerick football manager Billy Lee.

”Ian and Seanie have just come back in and I would have they have only been there really about twice - they have their own challenges in terms of getting themselves back fit and we have to be patient to allow them get back fully from their injuries,” explained Lee.

”Ian we have on the 31-man panel and Seanie we haven’t, because he needs more time - Seanie won’t be an option and the next week will tell with Ian, but we must be respectful that Ian has played 20-minutes with his club since the county final last year,” said the Limerick manager.

Lee brings Limerick to Ennis on Sunday, bidding to reach a June 10/11 semi final against Kerry in Killarney. But Clare have knocked Limerick out of the Munster SFC for the past two seasons.

“Let’s see where we are - if there is a lot of work to be done at least we will know. We want to put in a performance against a Division Two team and measure ourselves to see where we are,” said Lee, who saw his Limerick team win their final four games in Division Four of the Allianz Football League.

However, Clare football is riding high and they maintained their status in Division Two.

“The four wins were definitely encouraging and encouraging to us because we could see that they were producing what we wanted them to do and that’s the learning to know that they are listening and willing to do it. Success breeds success there is no two ways about that and it’s great for confidence. But to be fair last year was Division Three and this year was Division Four,” said Lee, referencing last season when Limerick were relegated after losing all league games.

“It was really about encouraging them to believe in themselves and we were changing things and in any walk of life people don’t like change and that takes time so a lot of what we were doing was embedding our style,” said Lee of the new-look Limerick management of Paudie Kissane (trainer), selectors Brian Begley and Ricky Ronayne and strength and conditioning coach Barry Fitzpatrick.

”I was involved many years ago and the work load now is gone up many many notches - I am not a man that believes in ticking boxes for the sake of it, I believe in ticking boxes for the value. There is much stress in the world besides football and we have made this into a very stressful game and while it is important and we wouldn’t be involved if we didn’t think it was important but I genuinely believe you have to let guys enjoy it too. We have a young squad, who are in college and doing exams and trying to find jobs and at the same time giving service to their county and clubs and that should not be forgotten – we want to create an environment where they can express themselves,” outlined Lee.

The manager insists: “we didn’t have an expectations and I wasn’t going to set any targets from the word go”.

“We are trying to encourage these lads that they are capable and able and to go and express themselves. It’s been a journey - we had a good McGrath Cup, I felt Westmeath were a step above everyone in Division Four and then we had Wexford and I felt we could have got something down there. The lowest point for me in the journey so far was Carlow. I have nothing but admiration for their honesty and the last four wins.”