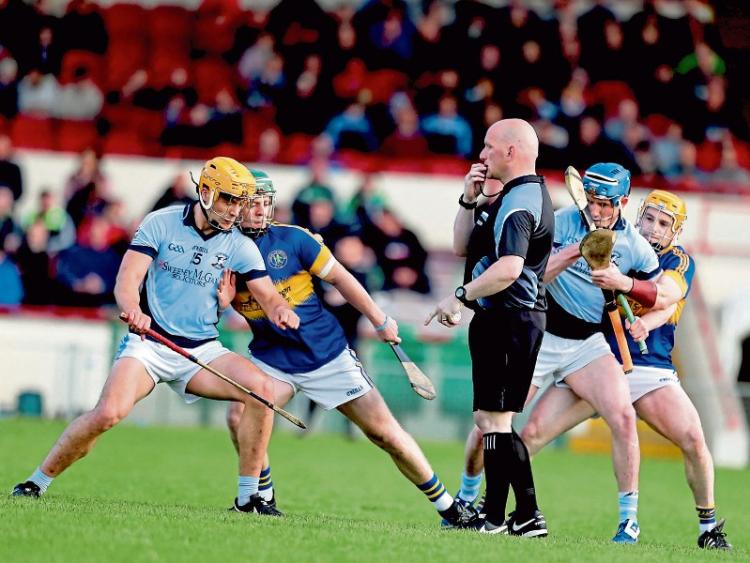 WE might still be a bit away from the real sparks flying in the Limerick senior hurling championship, but the fire was lit at least at the Gaelic Grounds last weekend.

Na Piarsaigh left a calling card to suggest that they have the hunger to go in search of more silverware. They ran out with more than a bit to spare in the end against Patrickswell, but for long stages this was a good contest that produced some fine scores.

Both teams were short key players and if they meet again in the latter stages of the championship, I would suggest it will be a very close affair.

These teams bring out the best in each other and this was evident both on the score board and also in the robust exchanges.

This was a championship game, it had a cut to it unlike what we saw from Ahane and Ballybrown in the opening game. I will deal with that game later and such was the poor nature of it that it might be used to help those having trouble with sleeping.

Patrickswell were ahead at halftime by two points 1-8 to 1-6 but in reality their lead should have been much more. They played the better hurling but didn’t take the chances they created.

This was the best game of club hurling I have seen Cian Lynch play in some time. He caused a lot of problems for Na Piarsaigh and had three points scored by the 10th minute.

Lynch was the source of great difficulty for the entire Na Piarsaigh half backline and it was good to see him coming into form. Lar Considine scored the Patrickswell goal after some good work by Aaron Gillane.

Indeed Gillane also hit some good points. Shane Dowling was scoring from frees but from play he struggled to match young John Flynn who is getting better with every outing. David Dempsey scored the Na Piarsaigh goal after superb work by Peter Casey.

Brian Murray had at first made a good save but he could do nothing to match Dempsey’s effort. Peter Casey was sharp and is growing into a quality player.

The players just about avoided a thunder shower at the break but it was clear that Na Piarsaigh had more energy in the second half. Shane O’Neill must have delivered a few home truths at halftime and his team responded.

Dowling from frees and Michael Foley from play saw the game level after just three minutes. It could have been different had a brilliant shot by Kevin O’Brien had not hit the crossbar.

Patrickswell had other chances as the game developed and they were to prove costly. The real turning point of the game came when Kevin Ryan scored a goal on the 43rd minute.

It was handed on a plate to him as Brian Murray should have cleared much earlier, but his backline was also slow to react. We had a bit of a bust up as players got stuck into each other but in the overall it was tame enough.

We don’t see many games now in Limerick with a cutting edge to them but this had it, thank God.

This game also saw the return of Kevin Downes. He looks rusty but he must have worked really hard to even come on as a sub in this contest.

The minutes he got in the game will stand to him and will at least build his confidence. Na Piarsaigh ran out winners but I got the sense we haven't see the best of either team at this stage.

This is a game that will not be remembered for the quality of its hurling. It was terrible as a contest.

Tom Morrissey of Ahane and Alan O’Connor of Ballybrown accounted for the majority of scores from frees. Ahane will look back and wonder how they left the game slip when they had gone four points up with six minutes to play. Jeffrey Enright was sent off and that created the opportunity for Ballybrown to come back.

They gave away frees and sharpshooter O’Connor nailed everyone of them. His final effort from play was a great score that saw the game finish level.

Tom Morrissey was the only player to really stand out. He carried Ahane on his own and that is not an easy job these days. As a club they have clung to the survival rope and unfortunately I don’t see that changing any time soon.

The standard in some of the games is alarming and it’s clear many clubs are struggling at various levels. It’s not that long ago that Croom looked like serious contenders, but they have fallen well back and are in danger of a drop to junior this time. Effin have also found it difficult to get a result.

Player population is hitting them and others but I don’t see any vision from the County Board in relation to the decline of many clubs.

The Limerick minors had a win over Waterford last week but the scoreline hides the poor quality of this game. This was a very disappointing performance from Limerick.

The team looked off the pace and the quality of their striking left a lot to be desired. I would say it was as poor a performance I have seen from a Limerick team at this level.

Waterford had goal chances and didn’t take them. Limerick only pulled away in the latter stages. Limerick will have to improve a good bit if they are to beat Clare in the semi final.

Clare are managed by Sean Doyle. He is a very good coach and and was highly respected during his time with Garryspillane. He also has former Clare manager Cyril Lyons as coach.

A crowd of just over eight hundred attended the game and that was below what had attended the minor football game the night previous. I think the Limerick academy has lost its edge and has ground to make up.

Ballybrown GAA lost a former great hurler and club man last week in Eddie Cliffe. He gave sterling service to the club over many years and was a sweet holder of the ash.

As a player he enjoyed some great days and players past and present were amongst the large crowd that attended his funeral. Eddie was brave on the field but he showed even greater courage over the past couple of years, to his family, club and friends I offer my sincere sympathy.

One of the greatest Limerick supporters that I knew passed away suddenly last week. Eamon O’Gorman was a constant pillar of support for all Limerick teams.

He traveled the entire country following Limerick. When Eamon went to games he would never be late, in fact he would be there hours before the game. Hurling meant a lot to him and he will be missed in the stands. To his wife Mary Jo and family I offer my sincere sympathy.

May both men rest in peace.