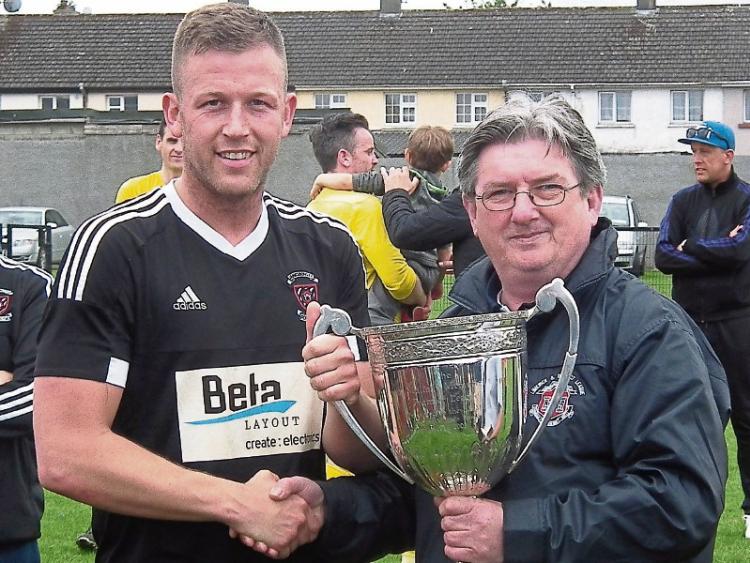 JANESBORO finally got their hands on the Fran Mullally Trophy when they defeated Aisling Annacotty 3-2 to be crowned Limerick District League Premier League Champions for 2016/17.

It proved a jittery few days for the Champions. They went down 2-0 on Thursday to nearest rivals Nenagh which meant they needed to win their final game at home to Aisling on Sunday morning.

They succeeded in their task but only after a frantic final five minutes when they led 3-2 and word filtered in the Nenagh had snatched a last minute winner in their final game with Carew Park.

The tension is all forgotten about now as Boro celebrate the return of the Premier Trophy after a 12 month absence.

Aidan Ryan and Shane O'Hanlon have done a superb job throughout the season and few will doubt their worthiness to take the honours. They led the way for much of the season and in the last couple of months were well in control.

Having already lost twice to Aisling this season, Janesboro were well aware of the threat posed by Mike McCarthy's men so went about their task with much more intensity than on Thursday's showing.

The Nenagh game forced Janesboro to field minus a number of suspended players and ironically two of the returnees, Mike Ryan, and Adrian Power, obliged with goals and another Aled Harkin set up the other in Sunday's win. The return of Tom Clarke and Danny O'Neill to the back line also played it's part.

'Boro were out of the traps like a flash and nearly took a first minute lead when Danny O'Neill delivered an inch perfect cross from the touch line. Shane Clarke controlled but his shot across the keeper rolled wide of the post.

A minute later Aisling keeper Stephen Walsh made a point save to deny Clarke again and the home fans were wondering if it was going to be one of those days.

However, they breathed a sigh of relief after nine minutes. Arian Power did well to work his way in along the end line and pulled the ball back for John Tierney who calmly teed up right winger Mike Ryan to fire home.

The home side did not rest on their laurels and nearly added a second when another O'Neill cross was met at the back post by Power but a superb block by Neil O'Brien kept the deficit to one.

The nerves were eased considerably on the half hour mark when Aled Harkin's trademark inswinging corner kick came back off the crossbar and struck a defender on its way to the back of the net.

Clarke forced a fine save from Walsh with a 25 yard free kick and at the other end Jason Lipper was just over the 'Boro goal with an overhead shot from the edge of the box.

Before the break a determined run by Mike Ryan saw him burst through three defenders into the area. He pulled the ball back to Power who curled the ball beyond Walsh but wide of the near post.

After the restart Aisling threw a cat among the pigeons when Jason Lipper scored from a free kick firing low to the bottom corner from outside the box.

'Boro responded well and Power was denied on the line by Walsh when the ball struck the keeper's face. The rebound fell to Clarke but a brave challenge by Jimmy Fyffe denied the striker his 40th goal of the season.

Harkin went within a whisker of scoring when his free kick struck the crossbar but the pressure told when the Tierney crossed into the box.

Walsh came from goal to knock the ball away from Clarke but it fell to Power who struck the goal that would ultimately secure the title for 'Boro. Before that however Mawdsley ensured the drama continued when he headed in a second goal to leave one between the sides.

Aisling could not muster any further real threat and the home side held out for the three points.