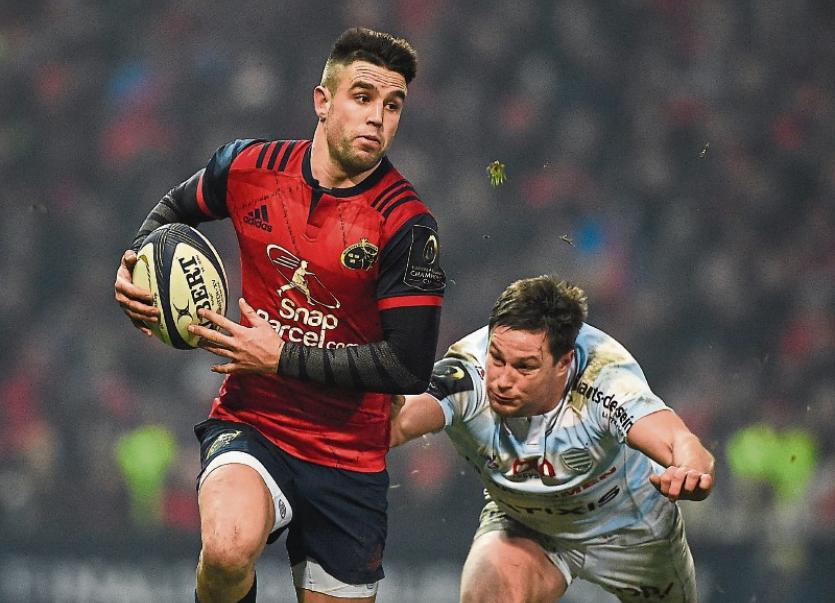 IRISH scrum-half Conor Murray is in line to make his comeback from injury in Munster’s Guinness Pro12 clash with Connacht at Thomond Park on Saturday evening. 5.15pm.

Murray has not featured for the province since injuring his shoulder in Ireland’s RBS 6 Nations clash with Wales in Cardiff in mid-March.

However, Murray has been named among the Munster substitutes for the final regular season of the Pro12 fixture against holders Connacht and as a result is in line to make his eagerly awaited comeback appearance for the province.

The Patrickswell man is one of six Irish internationals named on the bench.

Munster Director of Rugby Rassie Erasmus makes eight changes from the side that defeated Benetton Treviso for the clash with Pat Lam’s men.

With James Cronin, Rhys Marshall and Stephen Archer remaining in the front row, Billy Holland returns to captain the side and partners Darren O’Shea in the second row while the only other change in the pack sees Jean Deysel overcome a rib injury to start at blindside flanker.

Across the backline, Angus Lloyd and Ian Keatley come in at half back with Keatley to make his 150th appearance for Munster, doing so against his former side for whom he won 57 caps.

In midfield, academy centre Dan Goggin returns to the starting lineup alongside Jaco Taute who has been announced as one of six Munster players in the 2016/17 Guinness PRO12 Dream Team.

On the player injury front, following a scan this week, Dave O’Callaghan will meet with a specialist for the knee injury he sustained in the round 21 win over Treviso.

Munster have already secured a home semi-final in the Pro12 play-offs. The only issue to be resolved on Saturday evening is whether Scarlets or Ospreys provide their semi-final opposition.