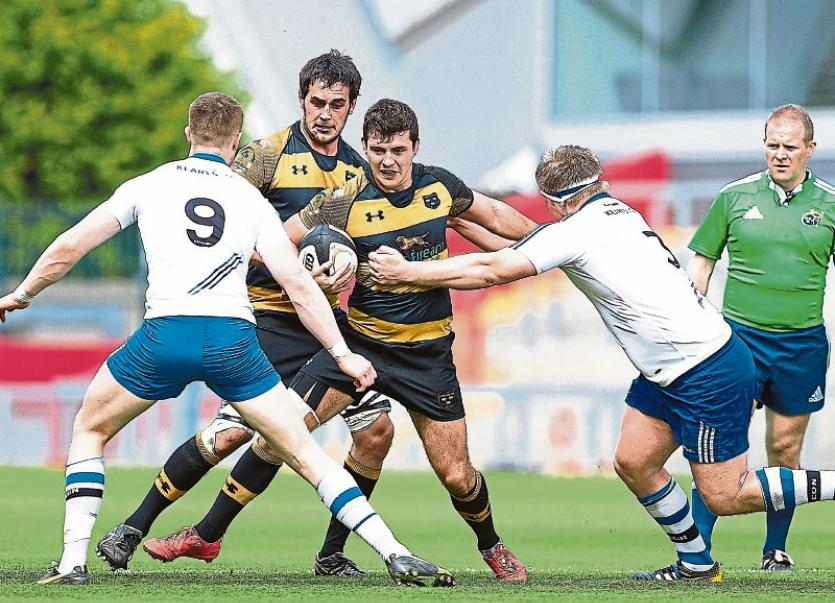 In Division 1A, third-placed Young Munster, already assured of a semi-final play-off place scheduled to go ahead on the same weekend as Munster's Champions Cup semi-final clash with Saracens, can take a giant step towards securing a home semi-final with victory over second-placed Cork Constitution at Clifford Park on Saturday, 2.30pm.

The Temple Hill side defeated Munsters' in the semi-final of the Ulster Bank League in Cork 12 months ago and have also defeated the Limerick side in the two most recent Munster Senior Cup finals. A bumper attendance is expected in Greenfields for Saturday's game.

Young Munster will complete their AIL fixtures away to basement side Old Belvedere at Anglesea Road on Saturday, April 15.

Meanwhile, at Dooradoyle this Saturday, Garryowen survival hopes in Division 1A face a critical juncture when Conan Doyle's charges host basement side Old Belvedere. Ninth-placed Garryowen occupy the relegation play-off position, behind eighth-placed Terenure on points difference. Garryowen will be desperate to record a home win in order to boost their survival hopes ahead of their final day trip to 1A leaders Lansdowne.

Meanwhile, in Division 1B, second-placed UL-Bohemian can secure a promotion play-off position if the Red, Red Robins can get the better of Ballynahinch at Ballymacarn this Saturday.

UL-Bohs picked up a losing bonus point in their most recent fixture away to Old Wesley. With Buccaneers guaranteed to win 1B and secure automatic promotion to the top flight , a second-placed finish for UL-Bohs woul secure a home fixture in the promotion semi-final play-offs later this month.

Also in 1B, eighth-placed Shannon will be looking to boost their survival hopes when hostong already promoted Buccs at Thomond Park.

Also in 2B relegated Thomond travel to Bective, while Bruff face a trip to Midleton in 2C with their promotion hopes already over for another season after Tullamore's weekend victory in their game in hand.