Limerick FC captain wants 'The Markets Field to be a fortress' 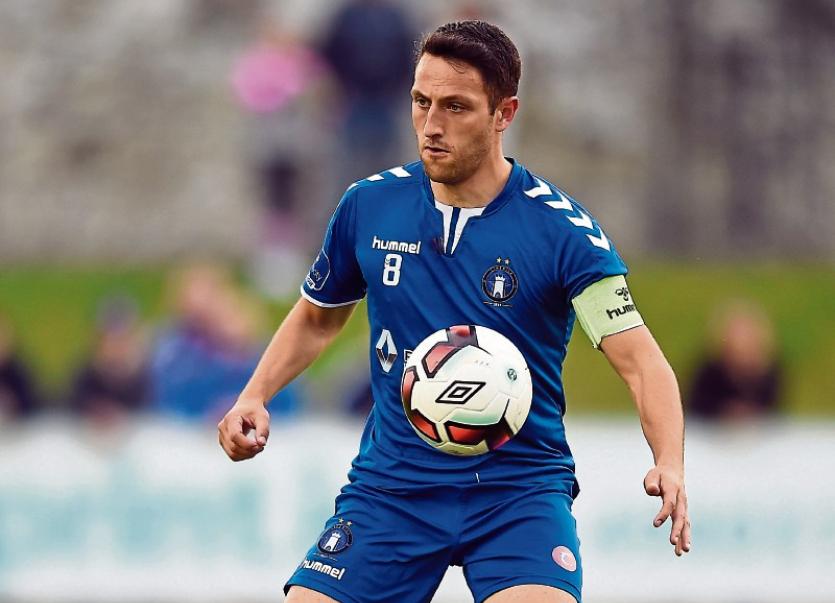 THERE aren't many families in Limerick that have a stronger association to its senior football club than the Duggans.

Father Ger is a club legend and son Shane is now entering his fourth season with the Blues. The club has regularly had its share of troubles in pre-season, but the 27-year old feels like this one is different.

After a 2016 season that was largely uncompetitive, Duggan doesn’t see it as a hindrance.

“At the start of the season, we were obviously heavy favourites considering the team we had. We still had to go out every week and prove it. It wasn’t easy – there were games like Cabinteely where they just parked the bus, so we had to have that bit of quality to break them down. It was good to keep onto most of last year’s squad.

“Obviously with the players we’ve brought in, we’re shaping up well coming into the new season.

“We’ve got a mentality of winning. We haven’t lost many games since we went to the Markets Field. I think that’s massive for players’ confidence. We have confidence in abundance now.

“Momentum is a real thing. It is. We couldn’t buy a win in 2015 and as soon as we won one, I couldn’t see us losing a game, no matter who we were up against.

“It was the same last season – even though it’s the First Division – you know you’re going to win two, three-nil. Winning breeds winning and we have that now.”

Momentum is one thing, but it’s additions that produce improvement. Limerick have brought in plenty of new faces as well as a born winner in Joe Gamble coming in to replace Derek McCarthy as fitness coach.

The Limerick captain acknowledges how positive the changes have been, and knows they’ll help get Limerick to where they want to be.

“Derek was fantastic last year. Every fitness coach has their own style – Joe’s been playing for years, and he his own look on things.

“He has slightly different opinions on things but Joe’s been around the league and represented the country, so it’s great to have someone of his standard come in. He has massive standards.

“All the new lads have really settled in. Chiedozie’s the youngest of them but he came on in the Cup final last year. Everyone knows his strengths – an unbelievable athlete; his strength and his speed. He’ll be huge for us this year – especially at the Markets Field.

“Dave O’Connor’s another experienced lad – he worked under Martin. He’s been unfortunate with the injury – he’ll be out now for a while. With Brendan Clarke, we’ve got two top ‘keepers that’d get on most teams in the country. That’s only going to benefit them as players.

“Rodrigo’s (Tosi's) looking unbelievable in training. His touches – he really does have that bit of Brazilian flair. I think the fans will be really impressed with him.”

Only a year detached from the division, but in reality – nearly four decades from rubbing shoulders with the big boys, Duggan, a Garryowen local, knows what it will take to emulate the past heroes of the area.

With champions Dundalk going for four-in-a-row, the top end of the table will require a professional approach that Limerick haven’t truly had in the modern era of the football club. Captain Duggan accepts these challenges.

“You need to have good depth in the squad. The Premier Division is getting stronger and stronger now – the likes of Cork and Dundalk are really setting the bar for other teams to catch up to them. You need a squad.

“There’s no point having eleven good players because you won’t have that same group week in, week out. Look at the top teams – they can bring players off the bench that can make things happen.

“Any one of their bench would probably get on any team in the country. You need competition. Things can get a bit lazy if players aren’t on their toes. We have that this year.

“There’s going to be five or six teams saying they want Europe. I think, as players, along with the new boys we’ve brought in, we’ve a really good chance. If you look at the year we went down, halfway through year, we were flying.

“Our home form will be massive. It has to be a fortress and to be fair – since we moved back to the Markets Field – it has been. Every year a team surprises you. It was Derry last year.

“Nobody expected them to be up around the top of the league when it started, but they got Europe. I don’t see, with the players we have, why we shouldn’t be pushing for Europe.”

With Limerick’s rise in prominence, fixtures take on more meaning. Games that had bigger impacts mean more, and rivalries begin to stem from them. Finn Harps and Cork are two of those games this year – enhancing the fixture calendar for the Markets Field faithful.

“Any fixture at home is a good fixture. There’s not going to be too many easy games, when you look at the league table – teams are a really good standard. We’re just happy to have home advantage and we need a big crowd to get behind us.

“There’ll be a bite to (Finn Harps). They left us with a bitter feeling in Ballybofey. The players want to put that right.

“I love playing in Turner’s Cross, too. The last match we played there, we won 3-2. They were going for the league, so they’ll have that in the back of their minds. It’s always a good game – a local derby.

“They’ve a huge fanbase there and we’re getting there now. Half our boys are from Cork, so there’s an edge.”

A lot of controversy has surrounded the re-shuffle of the league’s structure. Going from a 12-team team Premier Division to a 10-team tier will have major consequences for clubs.

The Limerick number eight sees both positives and negatives in it, but does fear for the long-term sustainability of clubs, as one really bad year can force a club into extinction. Given the previous track record of clubs in these testing situations, he’s right.

He said:“It’s more competitive when you’ve three teams going down so that’s a positive. But you need to look at the First Division as well. It’ll be a problem. Look at us last year – how far ahead we were.

“If that happens this year with a team like Waterford – other teams will struggle to maintain attendances.

“Cobh are a good example. Look at last year – I think they’d three thousand at the playoff. There was a good buzz around the place. There’ll be none of that this year.

“Some clubs will really struggle. But it’s good for the Premier because it increases the standard and it ensures it’ll be competitive right to the end.”

Hype will always surround a new league season. Traditionally, the first week in March (now last week in February) is host to lofty ambitions, massive over-confidence and dreams of league titles, as well as European adventures. But there is a genuine air of confidence about Duggan – a player who sat through a failed Stuart Taylor experiment, relegation in Ballybofey after a playoff defeat and a season of non-stop winning in the easiest fashion.

“This year has been the best season we’ve had signing-wise. We retained a good squad last year, fair enough – but years previous, we’ve gone in a bit light.

“We were playing with a lot of young lads. This is definitely the best year we’ve had since I’ve been at the club and I’m excited. We’re in great shape.”