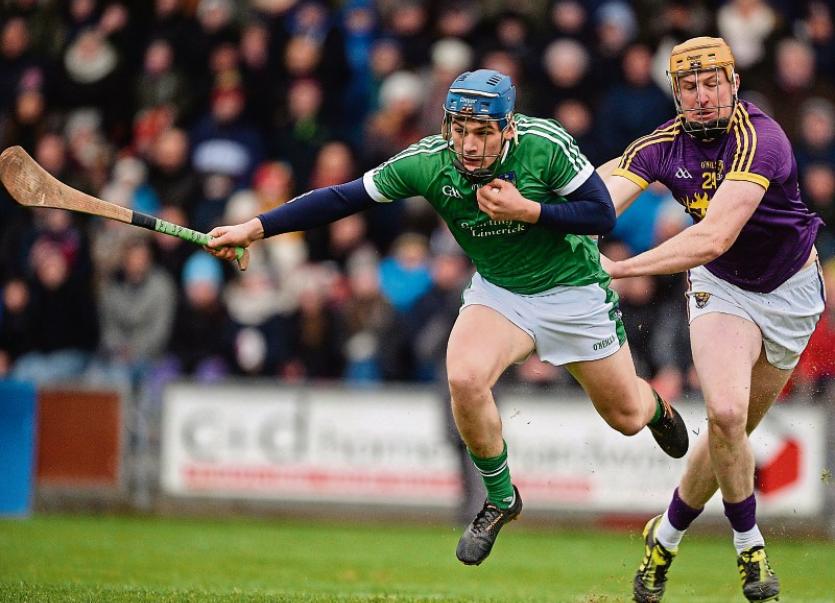 IT was a game of tight margins in Wexford Park last Sunday. Only one score separated the teams at the finish. In many respects it was a game of two halves.

A raw bitter wind that had rain and sleet attached was testing for both players and supporter. Wexford Park has always proved a difficult venue for Limerick but for long stages last Sunday it looked like they had done enough to hold out.

Wexford played with a sweeper and closed down the space as much as possible but despite that Limerick had most of the play. Limerick should have been more direct in the opening half but all too often they over passed instead of playing their inside forwards.

Many Limerick players were decorating the ball before they move it and that proved costly as the game went on. There was many talking points in this game and referee Diarmuid Kirwan was on the lips of most Limerick supporters.

On reflection he will have to agree that he made some hard and poor calls against Limerick. The most telling of all was not allowing a penalty when David Dempsey was pulled down.

There were a few more incidents in which Limerick could feel hard done by but we didn’t help ourselves either. The bare facts are that we didn’t do enough when we had the strong wind in the opening half.

Limerick had a lot possession in the first half and could have made greater use of it. Once more we had lads short passing instead of going direct.

Many of our players are young, this short game and needless running will take a lot out of them. Wexford looked in really good shape. They have worked harder than any team in the country over the last three months.

For sure Limerick had good reason to feel hard done by but they will have to accept that Wexford had them on the back foot for almost all of the second half.

Limerick could only manage four points in the thirty eight minutes of the second half and only one of them came from play.

Yes the referee made bad calls, but to blame him for losing the game might be a step too far. This game will provide reflection for the Limerick management also.

This was one of the youngest Limerick teams I have seen represent the county at senior level. That was a brave call by the management but they lacked a bit of power in attack.

They needed someone to break the ball and make life difficult for Wexford. Some of the young lads did well. The lack of blooding and developing players in a real and proper manner over the past three years is hurting us now.

This is why you had five young lads starting for the first time at this level last Sunday. I would still think that some of them are still a bit young.

Nevertheless Peter Casey did well. He has a lot of learning to do, but he has the craft to move up a gear.

Young Kyle Hayes worked very hard. He is just out of minor but to his credit he showed a great appetite for work.

This game showed up again that we have major gaps to fill down the centre. What we have now is a group of older players and a group of younger players. There is a gap as far as players in their mid twenties.

Players like Conor Allis, Cathal King, Adrian Breen, David Reidy and Tom Ryan are of the age that should see them move forward now. These players have been lost. Why is that?

Limerick played as individuals and lost their shape particularly in the second half. Wexford dominated most positions and players like Conor McDonald, Lee Chin and substitutes Podge Doran and Harry Kehoe caused a lot of trouble for Limerick.

The big difference in the second half was that Wexford were direct. They used the wind to good effect. When they put the ball in high it caused huge trouble for our full backline.

The Limerick defence needs lots of work and the problem I see is that players are doing too much travelling with the ball.

Our half backline are forgetting their primary duty. Instead they take off up field, the team looses shape and they lose the ball. Both midfielders were taken off in the second half.

James Ryan has been a superb servant but he is finding the pace difficult now for midfield. Would he offer the team more at centre forward? Would he break the play and look after the young lads?

Paul Browne had an ok first half but he faded in the second half. We can give out about Wexford playing on the edge but did we have anyone to match them?

Limerick only scored two points in the last twenty eight minutes of the game. Both of them were from frees. That gives you a fair idea of the hold Wexford had on the game.

Limerick were unable to contain or match what Wexford brought to the table during that spell. To make matters worse Limerick hit some really poor wides both from play and frees. Three of those wides came in the last five minutes of the game.

The last few weeks have been pretty heavy for Gearoid Hegarty both in hurling and football at colleges level and also Limerick. It’s a time table very few could master but at least the colleges games will end in the near future.

Limerick used a number of subs but none of them made any real impact. Management are giving game time to lads but some are struggling to shine.

Trying to make progress and develop players at the same time will present problems for Limerick. Winning promotion looks a long shot but as of now I don’t think we are capable of mixing it with the bigger teams.

The management team have a major project on their hands. They need to get the balance right so that the team can compete. They need to be more direct and they need to play with a bit more steel.

In the overall I thought Limerick did ok last Sunday. When you look at the age profile they did well.

Limerick supporters didn’t travel to Wexford. Only a few hundred made the journey and it was the same faces that always support.

John Kiely had a few words to say about supporters last week in Croke Park. I am not so sure it affected the attendance but on reflection he might regret going down that road. Sometimes it’s best to say nothing.

The focus now has to be about finding a way forward for Limerick. It will take time that is for sure and people will support if they see the ship going in the right direction.