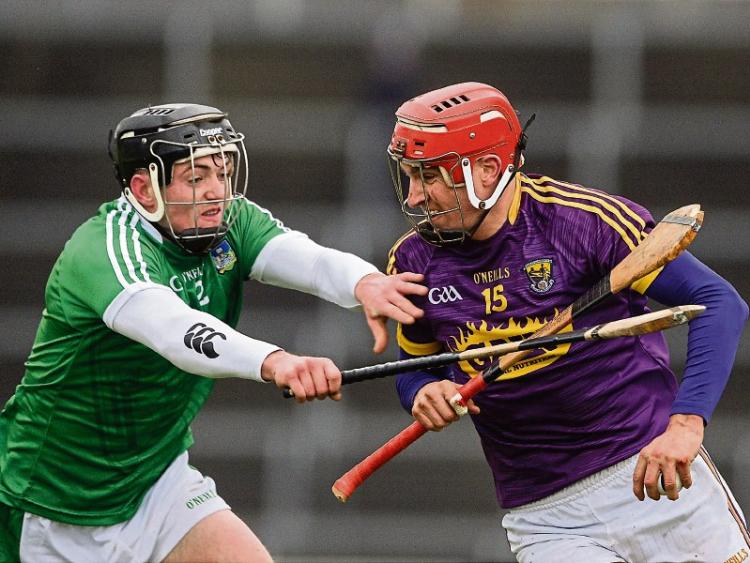 DEFEAT was Limerick’s lot in round one of the Allianz Hurling League this Sunday in Wexford.

It was a game full of drama and dictated by a huge breeze up the middle of the grounds.

Limerick were six points up at half time and were still 0-11 to 0-7 clear 10-minutes into the second half when David Dempsey appeared to be denied a certain penalty by referee Diarmuid Kirwan.

Peter Casey did land a resulting free to move Limerick five clear but from here Wexford took over.

Limerick played with the breeze in the first half and were 0-10 to 0-4 ahead at the break.

It was a half that Wexford only had Conor McDonald on the mark – two from play and two frees.

Limerick flew from the traps with a huge work-rate and had points from corner forward Graeme Mulcahy and Peter Casey, as well as a Diarmaid Byrnes before Wexford opened their account in the sixth minute.

Two Wexford points halted the Limerick momentum and with an extra defender at the back, the home side held firm.

But then came four points in a row for John Kiely’s side – Seamus Hickey, Peter Casey and Cian Lynch all from play. That had the men in green 0-7 to 0-2 ahead on 14-minutes.

Backed by the breeze Limerick were to only hit three points in the remaining 20-minutes.

Two more Wexford points came in reply to leave just three points between the teams with 10-minutes to half time.

Casey ended a barren spell for Limerick and then Hannon and Browne tagged on points to give the visitors a six point half time lead.

The Wexford goal came in the 25th minute of the second half to put them ahead for the first time.

Limerick went 22-minutes without a score in the half. Peter Casey and John Fitzgibbon (both frees) the only Limerick scores of the final 25-minutes.

Next up for Limerick is Kerry in the Gaelic Grounds.