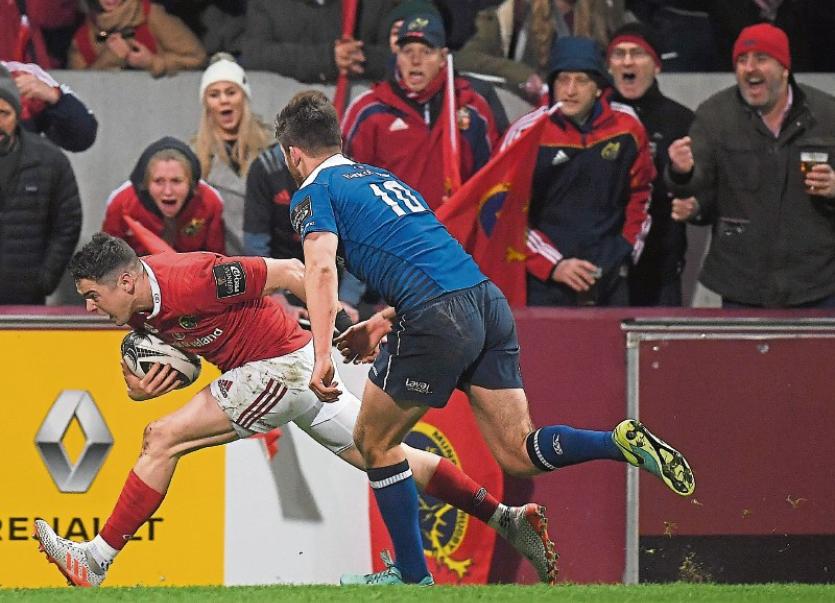 MUNSTER cemented their place at the summit of the Guinness PRO12 after securing a convincing 29-17 victory over arch rivals Leinster in their top-of-the-table clash at a sold-out Thomond Park on St Stephen’s Day.

The victory, secured before a bumper 26,200 attendance, ensured Munster have gone through the entire calendar year of 2016 at the Limerick venue unbeaten. The winning run stretches back over 11 fixtures.

Munster outscored their opponents by four tries to two to end their three game losing run against their interprovincial rivals in the Guinness Pro12.

An understrength Leinster made the ideal start in this top-of-the-table clash when the visitors took full advantage of some poor Munster defence with out-half Ross Byrne sending full-back Zane Kirchner into the clear before scampering over on 18 minutes. Nacewa’s conversion made it 7-0.

Resilient Munster hit back strongly, however. The home side turned down a possible kick at goal from a 22nd minute penalty award, instead opting for a kick to touch.

While Leinster managed to repel Munster’s onslaught initially, Simon Zebo showed terrific strength and agility to touch the ball down in the right corner. The score was confirmed by the TMO after some time.

Out-half Bleyendaal, out of sorts with his kicking against Leicester in the Champions Cup at Welford Road, landed a superb conversion from the touchline, with the help of an upright.

Leinster were ahead four minutes later however, when captain Nacewa kicked a penalty goal from just outside the Munster ‘22.

The see-saw nature of the scoring continued right up to half-time as Munster earned a dramatic 14-10 half-time lead thanks to a fine try from winger Ronan O’Mahony, converted by Bleyendaal.

Referee Nigel Owens chose to take no action against Leinster full-back Zane Kirchner for a hit on Darren Sweetnam when not in possession of the ball in the lead-up to the try. Sweetnam was replaced at half-time as a result of an injury he sustained in the incident.

Munster had a bonus point in the bag by the hour mark. After relentless Munster pressure, when the home side retained possession for 18 phases and had penalty advantage, Conor Murray’s crossfield kick was superbly fielded by Tommy O’Donnell, with the flanker touching down in the 51st minute.

Munster bagged their fourth try five minutes later when, following a kick to touch from a penalty award, the home side’s pack mauled the Leinster forwards back over the tryline with CJ Stander awarded the touchdown.

Bleyendaal took Leinster further out of losing bonus point range when landing a 61st minute penalty goal for a 29-10 lead for the home side.

Munster introduced Francis Saili as a replacement shortly after the hour mark. It was the All-Black’s his first appearance of the season for the province following shoulder surgery. Saili replaced the impressive Jaco Taute who is due to leave Munster inside the next week as his short-term contract comes to an end.

Leinster did have the consolation of scoring a second try late on through replacement hooker Richardt Strauss, which Nacewa converted.

However, the home side denied Leinster a losing bonus point late on, thanks to some stern defence.