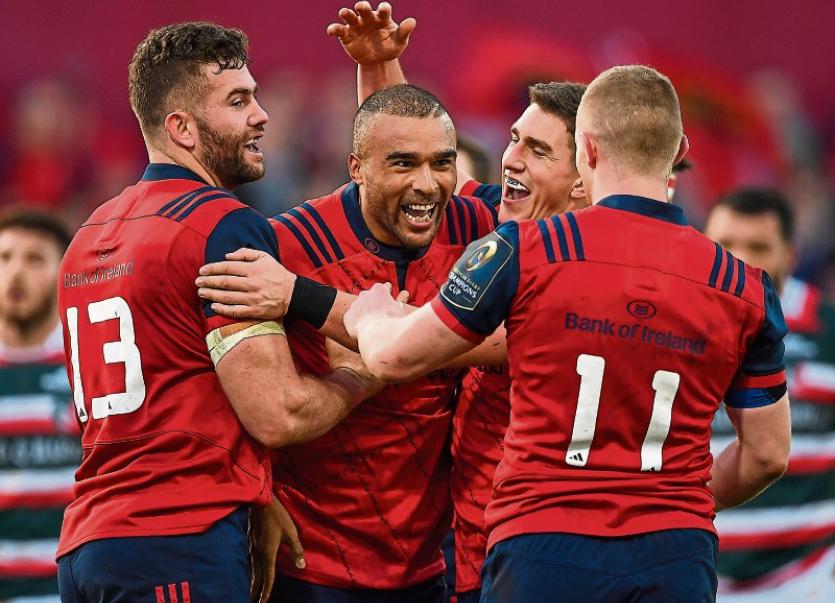 DOMINANT Munster stormed to a convincing 38-0 bonus point victory over a hugely disappointing Leicester Tigers side in their Champions Cup fixture at a sold out Thomond Park on Saturday evening.

Munster moved top of Pool 1 with a second bonus point victory of the campaign after shutting out the lacklustre Aviva Premiership side before a delirious attendance of 25,600.

Munster, who had lost home and away to Leicester at the same stage of the competition 12 months ago, travel to Welford Road for a crucial return fixture next Saturday, 3.15pm.

South African centre Jaco Taute, due to return home at the end of the month, bagged two second half tries, while Simon Zebo touching down in the opening period and Munster were also awarded a penalty try after Taute was impeded as he chased a kick ahead.

Leicester were left to rue three sin-binnings during the course of the game as the English side’s discipline let them down.

Munster enjoy a one-point lead over Glasgow Warriors in Pool 1 after the Scottish side enjoyed a famous 23-14 win over Racing 92 in Paris. Munster have played just two games in the competition, while Glasgow have played three.