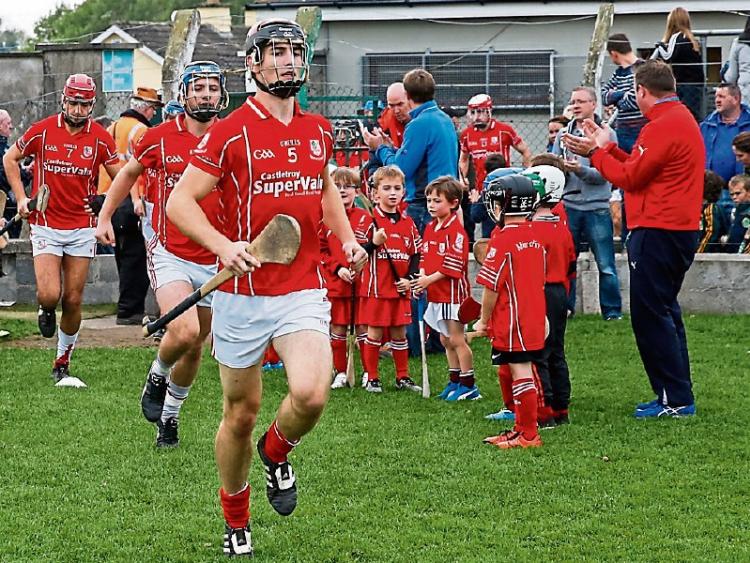 Monaleen booked their place in the semi final of the Munster club IHC this Saturday afternoon with a thrilling extra time win over Doora-Barefield, 2-21 to 3-13.

The exciting quarter final win books a semi final against Kerry’s Kilmoyley on November 5/6 in the Gaelic Grounds.

Monaleen had a return of 1-12 from Andrew La Touche Cosgrave – 1-6 from play.

A return of 2-3 from play from wing forward Tom Hannan had Doora-Barefield 2-5 to 0-8 ahead at half time. Monaleen had played with the aid of the gentle breeze in the first half.

The sides were level on four occasions in that first half but goals in the 10th and 20th minutes had the Clare side ahead.

Andrew La Touche Cosgrave and Ed Doyle had early Monaleen points as the side were tied 0-3 each after eight minutes.

Then came the first Hannan goal to move the men in maroon 1-3 to 0-4 ahead.

Ger Collins (2) and Shane Mullane hit back to move Monaleen ahead again.

But then came the second Doora-Barefield goal to move them 2-4 to 0-8 ahead.

The only score of the final 10-minutes was a Davy Conroy point to leave the Clare side three points clear at the break.

On the change of ends points from a Conroy free and another from Hannan moved Doora-Barefield 2-7 to 0-8 clear.

The first went to La Touche Cosgrave but Doora-Barefield hit back immediately when Alan O’Neill fired a penalty to the net. That left it 3-7 to 1-10 with 41-minutes played.

O’Neill and sub Niall DeLoughrey added points and the Clare side were five points clear entering the final quarter.

But Doora-Barefield weren’t to score in the final 25-minutes of action – including almost eight minutes of injury time.

Monaleen continued to dominate in extra time with four successive scores from subs Mark O’Dwyer and Darren Golden, along with captain Peter Russell to move 1-19 to 3-9 clear.

Finally after 32-minutes without a score Davy Conroy had Doora-Barefield back on the scoresheet. When O’Neill added another it was 1-19 to 3-11 at half time in extra time.

So Monaleen brought a two point lead into the second period of extra time.

The Limerick city side had the tonic start to the second half when Ger Collins goaled after 27-seconds and that was good enough to see them through.