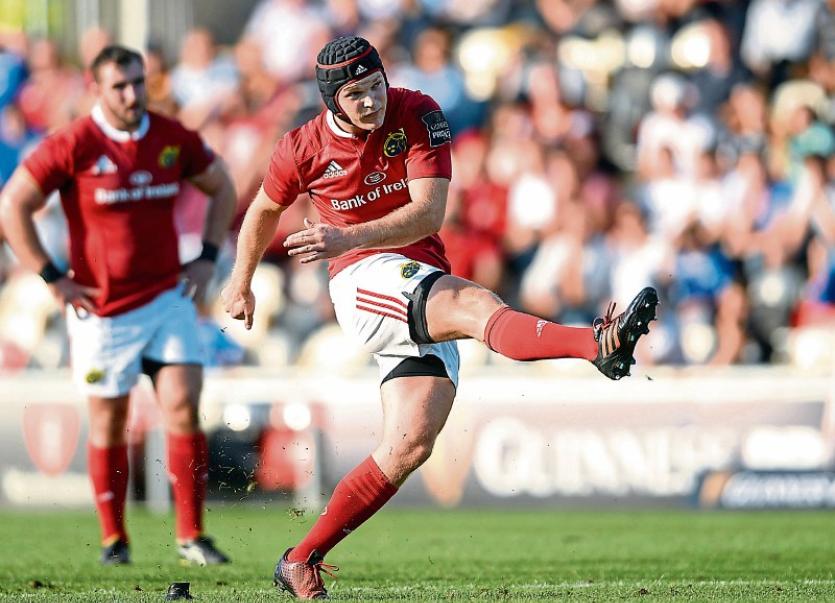 MUNSTER out-half Tyler Bleyendaal admits he is very excited by the prospect of guiding the province’s Champions Cup glory bid from the pivotal half-back berth.

Bleyendaal, who will be visiting Paris for the first time this weekend, will make his European Cup debut against French Top 14 champions Racing 92 at Stade Yves-du-Manoir this Sunday, 3.15pm Irish time.

Twenty six-year-old New Zealander Bleyendaal has put a nightmare run of injuries behind him to emerge as Munster’s first choice starting out-half.

Playmaker Bleyendaal said: “I am very excited to be heading into a Champions Cup campaign. I kinda had it there last year and then obviously didn’t get to play because of the injuries.

“It was very frustrating. This year we have built nicely from the start of the season and it seems to have come around quickly, European competition.

“To start off away in Paris against Racing is a great challenge that we are excited about.

Despite starting in five of Munster’s opening six Guinness Pro12 fixtures this season, Bleyendaal says he is not playing to his full potential yet, something which will excite Munster fans.

“Look, I am probably still a way off. I have noticed myself building, being able to contribute more and just get back into playing rugby. It feels more normal now. Go back a  month and a half and it was an effort because I had been out for so long.

“I am enjoying myself anyway which is great.”

So what does Bleyendaal know about Ronan O’Gara, the Racing 92 defence coached, who was a talismanic out-half for Munster in their two Heineken Cup wins in 2006 and 2008.

“I just know he was the man who got results and drove Munster around the field,” Bleyendaal said.

“Look, I do my best to do the same, but in a different way, I guess, because the game has kinda moved on.

“The competitions are evolving, so I do my best to help the other guys on the field to perform.”