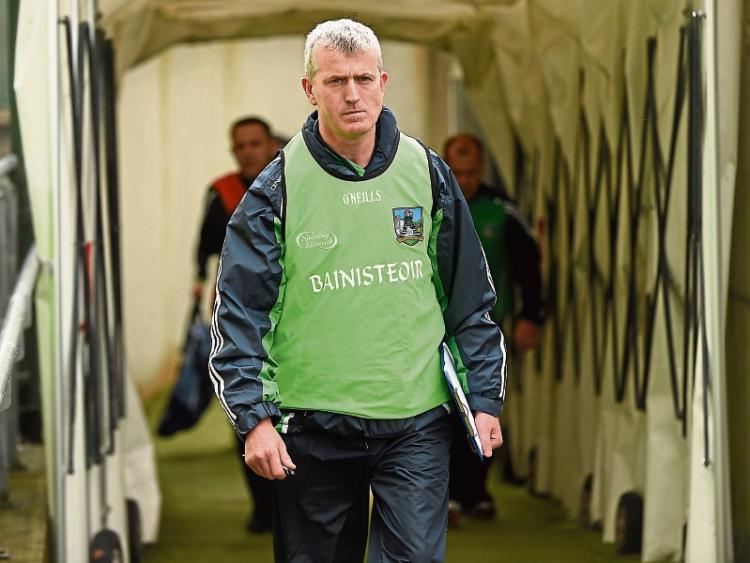 “IT would be my ambition to manage Limerick at some stage,” was the somewhat bold declaration from John Kiely in September 2013.

At the time he ruled himself of out the elevation from selector to manager when John Allen departed as he had just been appointed the new principal of Abbey CBS in Tipperary town.

A county senior hurler and footballer in his day, Kiely is a confident speaker, doesn’t do brash statements or make overwhelming predictions, but won’t shy away from the truth.

“It won’t be for the want of effort,” he promises as he embarks on his three year term.

“It’s now or never, there won’t be a second chance at this,” he told LeaderSport of his new role.

“We are all chomping at the bit to get going. There will be bumps on the road and we know that but the response from everyone has been positive - there have been a raft of messages via different formats to wish us well and offer support. That surprised me a bit because I thought maybe people wanted someone a bit more high profile but the announcement has been very well received,” he explained of his first week since replacing his former Garryspillane team-mate TJ Ryan.

“In terms of this job I know that it is phenomenally important,” he stresses.

On the short-list of most from the outset, Kiely didn’t make the decision lightly to move from the U-21s to the flagship team.

“It was now or sometime in the future.”

He explains: “When we were doing the end of year review for the U-21s we highlighted a number of challenges in terms of preparing the team and I was pondering if I was ready to go back into that again and all the time it was complicated by the fact the the senior role was vacant. Gradually the decision was burning away at the back of the mind and then came the call from the five man committee and made things more immediate”.

“You have got to keep things close but of course make sure everything at work and at home will be ok. This job will put pressure on both and if both weren’t going to be ok the mind would be took full so thankfully there is support in the school and at home with Louise and the family,” he explained.

“I would consider it a hugely responsible position and of course there would be doubt in your own mind but I have always got a response from players - probably apart from this year’s U-21 game with Tipperary up in Thurles. But every other time, players generally play for me and that was very important in making this decision.”

The future he says is “a huge opportunity”.

“At the end of the day for all Limerick people we want to be proud of the teams that we put out - proud of their skills, fitness, heart and passion. I want a team of Limerick hurlers taking the field at the peak of their powers and as well prepared as possible,” stressed the 1998 All Ireland IHC winning corner back.

“I will be demanding the highest possible standards from the players - we will be looking for 34/35 guys who are completely loyal to each other and the jersey.”

Among the first big decision to face Kiely and his backroom team will be selecting their panel.

“Personally I would like a larger panel initially and give the players a chance to show us what they can do and to see how they respond to training. There is a huge amount of talent coming through in Limerick and the big decision is at what stage and how soon do you bring them in. These are big calls that we have to make because you need a mix of strength to cope with inter-county hurling and also experience. There is more competitive for some places than others and getting a nice balance will be what we are looking for.”

He continues: “We want to create an environment that players will enjoy - they sacrifice so much of their time so it’s important that they enjoy it and enjoy pulling on the jersey”.

Between senior, intermediate and U-21 level, John Kiely has held positions within Limerick inter-county backroom teams for six of the last seven years.

“The marriage of the two will be very important - we will challenge each other,” said Kiely of his new management team.

“You have to have a connection between players and management. There is a lot of experience with Joe (O’Connor) and Paul (Kinnerk). Jimmy has always been involved with teams across north Cork and south Limerick and the U-21s for the last few seasons. I have some knowledge and experience from my time with John Allen, Donach (O’Donnell) and Eamon (Meskell) in 2012 and 2013.”

O’Connor in his second year in his role, but Kinnerk joins up with a Limerick inter-county side for the first time after seven years at varying levels with Clare.

The manager is hoping that the quartet and one additional selector can hit the ground running.

”I remember back in 2012 there was a big bedding-in period and I would hope we can bed-in quickly, especially with Paul and Joe working together previously.”

From the hurling public, Kiely seeks “patience and understanding”.

“We are setting off into the first of three years with the team so it would be foolhardy to set any immediate goals. We want to get the players together and see where we are at. We will do strength and conditioning until Christmas but also some hurling and then in the New Year there is only five weeks to prepare for the league against Wexford and that time will fly - we will be taking it game by game to develop a team,” outlined Kiely.

“From meeting people over the last week everyone has said that they understand the first year will be tough for our settling down period. People know that it can’t happen overnight. Lets see which way the arrow goes - hopefully upwards.”

“It’s a huge honour, no doubt about that and it doesn’t matter when you get this role, it still carries the same responsibilities and respect no matter what. I’m absolutely thrilled but I’m not blind to the fact that it’s going to be a major challenge in our lives. As Limerick hurling people, we want to see Limerick compete at the highest possible level.”

What of a brand of hurling?

“At the end of the day every team management has to look at the players at their disposal and see where they go from there. You can’t have a generalised approach to all games - the opposition and the game comes into it so things are day to day,” said Kiely.

With the new manager stressing he will demand the “highest standards” from the players, comments from  last October’s All Ireland U-21 hurling victory banquet come to mind.

“The levels that ye can achieve or attain will be dictated by the level of effort ye put in in the future,” said John Kiely in a passionate address.

“Every single day you should ask yourself what can I do better - don’t think that you are the full article because you are not, far from it but ye have all the tools in yer grasp that can make ye great players.”

“Ye need to reach to be the best ye can possibly be.”

Certainly to be the “best ye can possibly be” is all that Limerick hurling supporters will want from 2017 and onwards.