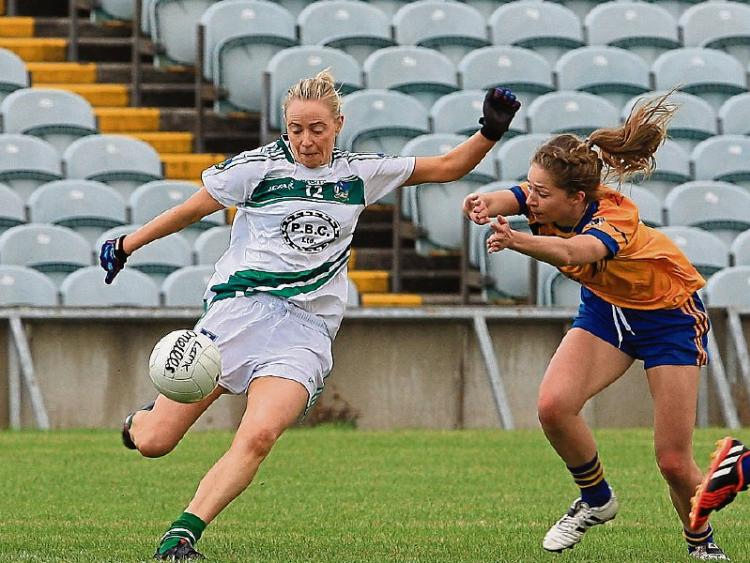 Limerick bowed out of the Ladies All Ireland Intermediate Football Championship after they were beaten by Clare by 5-16 to 2-7 on Sunday at the Gaelic Grounds.

Clare’s full forward line did all the damage with Niamh O’Dea and Grainne Nolan scoring 3-12 between them.

Limerick were on the back foot from the moment O’Dea got the game’s first goal after just 34 seconds.

A strong run from Niamh Keane opened up the Limerick defense. She then left the ball off to O’Dea who was left with the easiest of finishes to give Clare a perfect start to the game.

O’Dea followed with two points before Limerick got on the scoresheet in the 14th minute through the Dymphna O’Brien.

She then added a free before Limerick got their first goal chance. A poor kick out by Clare keeper, Ciara Harvey was pounced upon by O’Brien.

With the keeper off her line, O’Brien went for the lob but her effort went agonisingly over the bar from Limerick’s point of view. The score at 1-3 to 0-3 in Clare’s favour at that stage.

Clare were stung into action after O’Brien’s scores and hit 1-3 without reply. The goal came from a well won ball on the ground by O’Dea.

She took on the Limerick defence before offloading to Nolan who was fouled by Limerick corner back Olivia Giltenane.

Nolan made to mistake with the penalty as she slotted her effort past Martina Giltenane in the Limerick goal.

Limerick responded immediately with their first goal from the next attack. A powerful run by Niamh Richardson ended with a rifled effort into the roof of the net.

Nolan kicked the next two scores for Clare to give them a comfortable lead at the break. The Banner leading by 2-8 to 1-3.

Limerick needed a big second half to have any hope of a comeback and a bit of magic from O’Brien set them on their way in the 32nd minute.

She lined up a free on the 21 and fooled the Clare defence by powering a shot in the roof of the net when it looked like she was going for a point.

Clare rallied and took control of the game after that once again. Points from O’Dea, Ailish Considine and a second penalty from Nolan ended Limerick’s comeback hopes.

Aoife Keane and Niamh Keane put a gloss on the scoreline with goals in the closing stages but Clare were deserving winners.