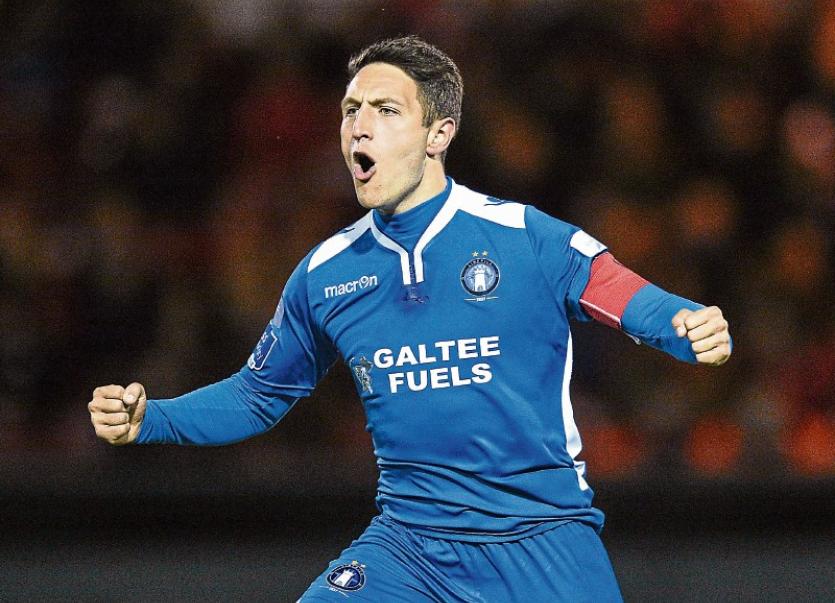 Three more wins are likely to see Martin Russell’s Blues –currently 20 points clear of Drogheda Utd at the top of the First Division – secure automatic promotion back to the Premier Division.

Limerick made it five wins on the bounce since returning from the midseason break with a 2-0 victory over Athlone Town on Friday night last. Aaron Greene and Robbie Williams bagged the goals for the Blues at Lissywoollen.

Limerick FC captain Shane Duggan said: “Shelbourne will be another tough game. The last time we played them in the Markets Field (won 5-1 in April) it was a tight game for a long time. Then, when we got one or two we broke away. I wasn’t involved in the game up there but it was very close.

“We’re expecting a difficult match again, especially with Owen Heary going in there, they’ll be well organised. They have an outside chance of a playoff place if they go on a run so their players will be well up for it.

“They’ll be coming down here looking for a scalp and to end our unbeaten run.”

“People are saying possibly we could secure promotion in the Cabinteely game (August 13) but we’re not really looking into it. “We’re concentrating on each game as it comes. There is no real talk of it in the dressing-room.

“We’re focussed and this Friday is the next game. We have no targets – we are just looking to win every single game as it comes and that’s how we will approach it for the rest of the season.”

The Limerick squad travel to Derry on Sunday for their EA Sports Cup semi-final clash with Premier Division Derry City at the Brandywell on Monday night, 7.45pm.