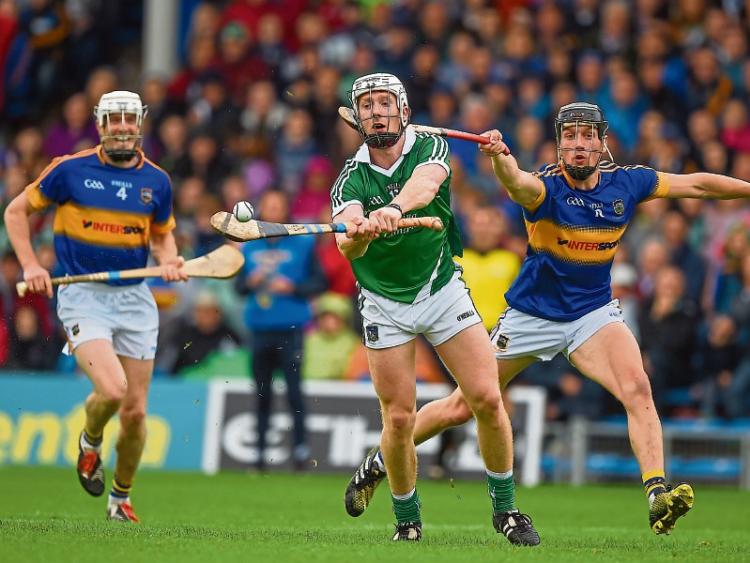 THE Limerick senior hurlers crashed out of the Munster SHC this Sunday afternoon in Thurles.

The provincial semi final finished Limerick 1-16 Tipperary 3-12 and that was despite the home side playing for most of the contest with 14 men.

The defeat sends Limerick through the All Ireland SHC Qualifiers with a game on July 2-3 against Dublin, Offaly, Wexford, Laois or Westmeath. The draw takes place this Monday morning at 8.30am.

In a rain soaked Thurles TJ Ryan’s Limerick never imposed themselves on Tipperary, with the home side winning most breaking ball to maintain their lead advantage.

In front of 25,531 it was an opening half that saw Tipperary score three goals and have a player sent off.

But Tipperary did lead at the beak, 3-5 to 0-11 and Limerick have played with the aid of the breeze.

Two of the goal came in the first eight minutes and both from former Castletroy College student Michael Breen – the goals were their first two scores.

The first in the sixth minute saw Diarmaid Byrnes, Seamus Hickey and Dan Morrissey with chances to clear before Breen scored.

Two minutes later Nickie Quaid saved a drive from Seamus Callanan and Breen was on hand to bat the rebound to the net.

That had the home side 2-1 to 0-2 ahead with Shane Dowling (free) and Barry Nash with the early Limerick scores.

With Limerick rattled and Tipp five points ahead came the red card with John O’Dwyer sent to the line for a pull on Richie English.

Limerick piled on the pressure with three more Dowling pointed frees and a Declan Hannon score leaving it 0-6 to 2-1 after 20-minutes.

This time it was from Callanan, who finished coolly after a number of Limerick defenders had failed to gather a high delivery and possession was swiftly moved to the full forward to strike low to the net.

In fairness the Limerick response was again good with Gearoid Hegarty, James Ryan and Dowling pointing to leave just one point between the teams.

But Tipperary went to the dressing room with a three point lead with late Callanan points – 0-11 to 3-5.

In the second half Limerick dominated and relied on Dowling fress, while never threatened for the necessary goal.

Entering the final quarter Tipperary were 3-9 to 0-14 ahead with two Dowling frees and a Hannon point the Limerick lot in the first 20-minutes of the half.

ThreeNoel McGrath points kept Tipp clear with no answer from Limerick until the injury time goal from Tom Morrissey.