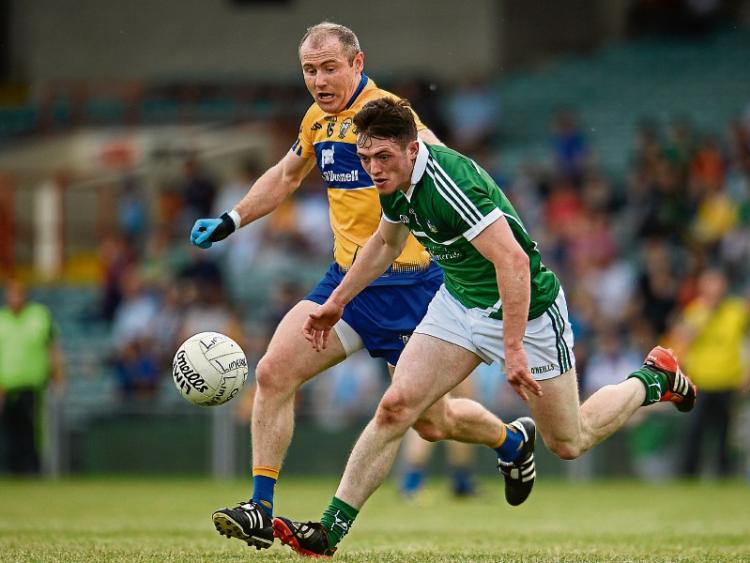 THE Limerick senior footballers suffered defeat in the Munster SFC this Sunday, losing to Clare 0-16 to 0-13.

It’s the fourth year in a row that Limerick have been beaten in the opening game of the Munster championship.

John Brudair’s Limerick now await the All Ireland SFC qualifiers on June 25, while Clare move onto a provincial semi final meeting with Kerry.

This was a dour contest in the opening half but did open-up somewhat in the second period.

Clare were 0-5 to 0-4 ahead at half time. It was an opening half that saw Limerick kick eight wides and Clare record six.

Limerick were left to rue six wides in the opening stages before an Ian Ryan free finally opened the scoring in the 11th minute.

Cian Sheehan added another almost immediately and then in the 13th minute Cathal O’Connor had the first Clare score.

But Clare almost had two goals in the opening minutes with Keelan Sexton and O’Connor both wide with attempts.

Ryan’s second free moved Limerick two clear at the mid-point of the half but Sexton and Sean Collins had the game level for the first time in the 22nd minute.

Limerick’s only score of the final 21-minutes in the half came from Seanie Buckley, six minutes from the break. And his rising drive could very well have been a goal.

Just before Buckley’s point Darragh Treacy also had a goal chance but lost possession at a vital stage.

The Clare half time lead was ensured with David Tubridy (free) and Podge Collins points in the final stages.

On the change of ends points from Keelan Sexton and Coin Cleary opened a four point lead for Clare.

Frees from Ian Ryan and one fine effort from the outside of his boot from Danny Neville left just the minimum between the teams on 50-minutes, 0-9 to 0-8.

Limerick’s first score from play in the half came in the 58th minute from Stephen Cahill.

But the Clare response was David Tubridy and Podge Collins points to leave four between the teams.

Ian Ryan pointed from play and from a free but Clare maintained their lead.

There was to be five minutes of injury time but Limerick couldn’t find the necessary goal.