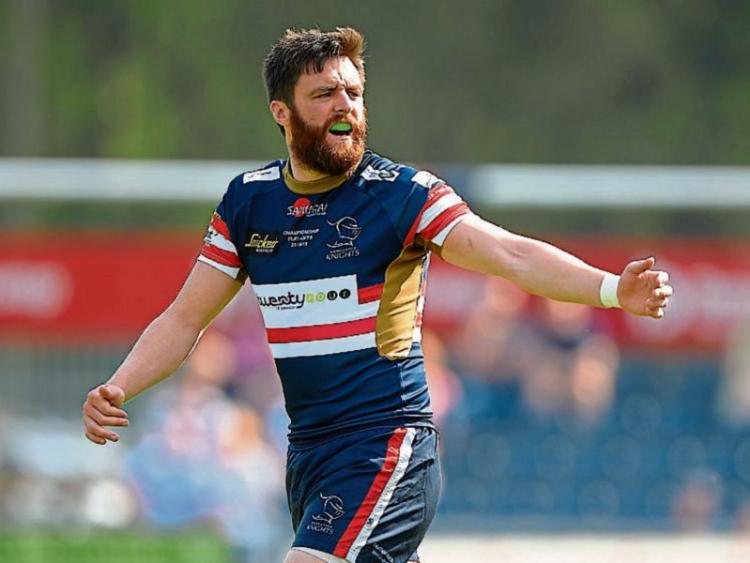 Cusack’s Knights will be promoted to the Aviva Premiership next season if they can overcome favourites Bristol over their two-leg play-off.

Doncaster will enjoy home advantage for tonight’s first leg at Castle Park (7.45pm), with the second leg set to go ahead at Bristol’s Ashton Gate grounds on Wednesday, May 25.

Doncaster had never even reached the play-offs before this campaign but, after a highest-ever finish of second, are now just one step away from the Premiership.

Limerickman Declan Cusack, who played with Thomond and Garryowen, joined the Knights from Plymouth Albion at the end of last season following their relegation to National One.

The 27-year-old spent two seasons at Plymouth’s Brickfields home and was a pivotal part of the Albion set up since joining ahead of the 2013/14 campaign, making 46 appearances and scoring over 300 points.

Cusack got his first taste of professional rugby with Munster. The talented fly-half joined the Munster set up in 2009 on a training contract having spent the summer training with the Munster Rugby Academy.

He then joined the squad on a development contract after maintaining the number 10 spot in Munster's British and Irish Cup side for the 09/10 season and moved to a senior contract for the 2011/12 season.

He went on to feature heavily in the ‘A’ side as well as making five first team appearances.

At the end of the 2011/12 season, Cusack headed to Spain where he played for Bizkaia Gernika.

As well as competing in the Spanish Premiership Cusack impressed in the Amlin Challenge Cup and ended the season as the Club’s top scorer in European competition with 50 points.

Meanwhile, this summer’s pre-season will see Munster play Worcester Warriors at Musgrave Park on Friday August 26 in the first confirmed fixture of the 2016 Kearys Renault Series.

With Ireland second-row Donncha O'Callaghan in line to play for the Premiership outfit, the clash also gives Munster fans the chance to welcome Munster's most capped player of all time back to Cork.

Munster will also play a second pre-season clash on Friday August 19 with details to be confirmed.