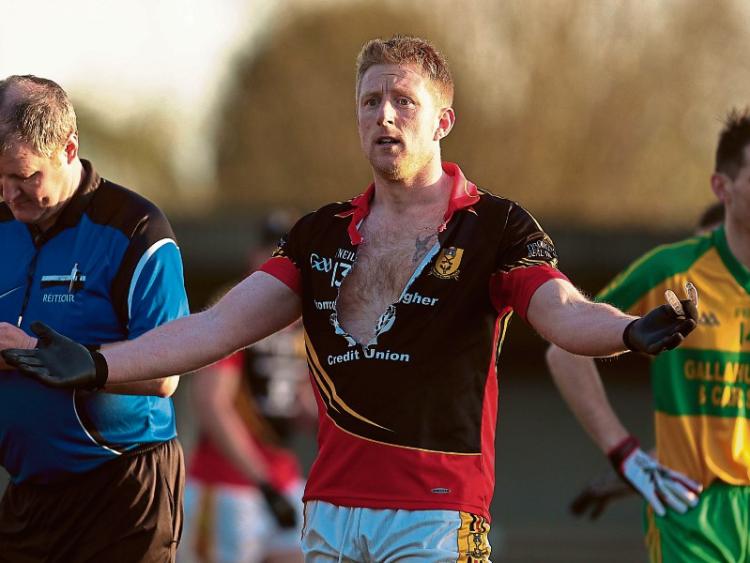 AHEAD of a three month Summer break round two of the Irish Wire Products sponsored Limerick SFC takes place this May Bank Holiday weekend.

This repeat of the 2014 Limerick SFC is all the more important given that both sides lost in round one.

Ballylanders were of course winners in that final two years ago and also edged past the city side last year, 0-13 to 0-10.

The Barry Donnelly led Ballylanders could again be without inter-county midfielder Tom Lee.

But the Tom Downes managed St Patricks will be without the injured Eoin Hanrahan and a trio (Pa and Jason Mullins and Gary Neville) of Pike Rovers players ahead of their FAI Junior Cup final in the Aviva Stadium.

Sunday, May 1, in Askeaton

Injuries to Jason Stokes, Eoin Barry, Killian Phair and others didn’t stop Drom-Broadford last weekend and they will look to bring a 100% record into the Summer break.

The city men just may find the experience and strength of the former champions too much to handle in their first ever championship meeting.

This is the only round two meeting of round one winners.

Both sides scored four goals last weekend and will need a platform from the middle third to prosper.

The battle of Johnny and Paudie McCarthy, Darragh Treacy, Mike Flynn and John Doyle against Conor and Josh Ryan, Eoin Fitzgibbon and Niall Maher could be decisive.

It's a busy peruid for Oola's Josh Ryan, who wasplaying a fourth successive Wednesday night of Munster minor championship this Wednesday in Waterford.

These sides have met in the final round for the past two seasons with Newcastle West 0-11 to 0-6 winers last year enroute to ending a 23 year wait for the senior title.

The champions new management will want to bounce back from their opening round draw, while Ballysteen won’t want to be point-less over the Summer break.

The Abbeyfeale men had early season momentum last year and will want to continue that trend, while Rathkeale will have pondered all week how they didn’t overturn Pallasgreen last weekend.

Last weekend suggests Fr Caseys are getting their scorers easier but this could be a more open game, which would suit Rathkeale.

Monaleen have won this tie in the last two championships.

Pallasgreen won last weekend, remarkably with a score of just 2-6. Jonathan Deere was sent off but it was for two yellow cards.

Monaleen drew with the champions and must build on that performance to take some credit from that display, where they led for a long time.

They were left irked by late refereeing decisions and will look to take that motiviated into this tie.