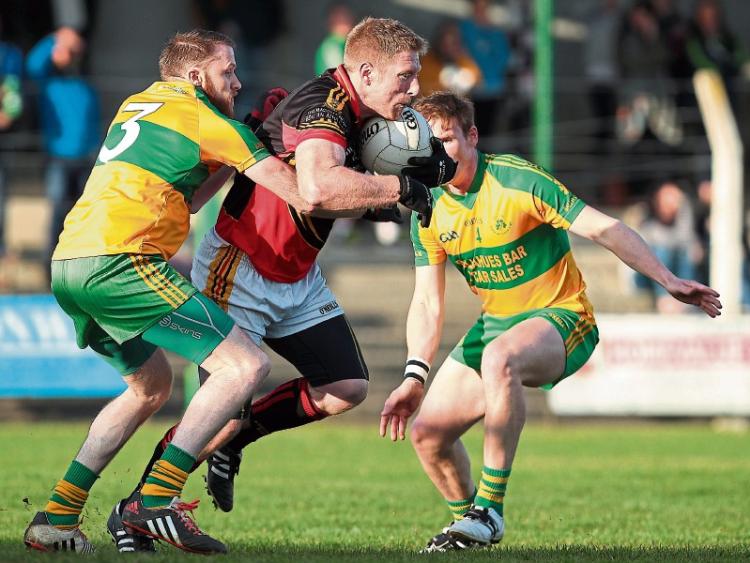 A repeat of the 2014 Limerick SFC final between St Patricks and Ballylanders is the headline fixture in this weekend’s second round of action in the county championship.

Ahead of the a three-month Summer break, both teams are battling for a first win after opening round losses last weekend.

Tom Downes’ St Patricks lost to St Kierans in round one, while 2014 champions Ballylanders were defeated by Dromcollogher-Broadford.

The Rhebogue side will again be without some key players with Eoin Hanrahan ruled out through injury and Pike Rovers trio Pat and Jason Mullins and Gary Neville unavailable until after the FAI Junior Cup final in the Aviva Stadium on May 14.

Ballylanders’ inter-county midfielder Tom Lee didn’t line out in their game last weekend and could be absent again for the south Limerick side.

Also on Sunday evening is the clash of Na Piarsaigh and Drom-Broadford in Askeaton. The Caherdavin men were without Gordan Browne and Brian Shannon in their loss to Oola last week.

There are three games on the fixture list for Friday (7.00).

Monaleen will play Pallasgreen in Caherconlish. The Castletroy side will look to build on their round one draw with champions Newcastle West.

Monaleen attacker Graham O’Connell was forced off injured in that tie and manager Muiris Gavin will be hoping the Kerry native is available for the tie, which the city side won 1-13 to 1-5 last season.

Champions Newcastle West play Ballysteen in the Rathkeale GAA grounds. These west Limerick sides met in the final round of group games in the last two campaigns. Newcastle West were winners last year, but the rivals finished level in 2014.

The third game on Friday is the meeting of Rathkeale and Fr Caseys in Newcastle West. While the Abbeyfeale side were impressive round one winners, Rathkeale fell to a loss to Pallasgreen.

There is only one game on Saturday – Oola meeting St Kierans. This tie in Mungret is the only meeting of sides that both tasted success in round one. Both sides scored four goals in their win and will know that another success will give them a launchpad for a spot in the knockout stages.

After the Bank Holiday weekend action, the Limerick SFC breaks until round three on July 28-31.