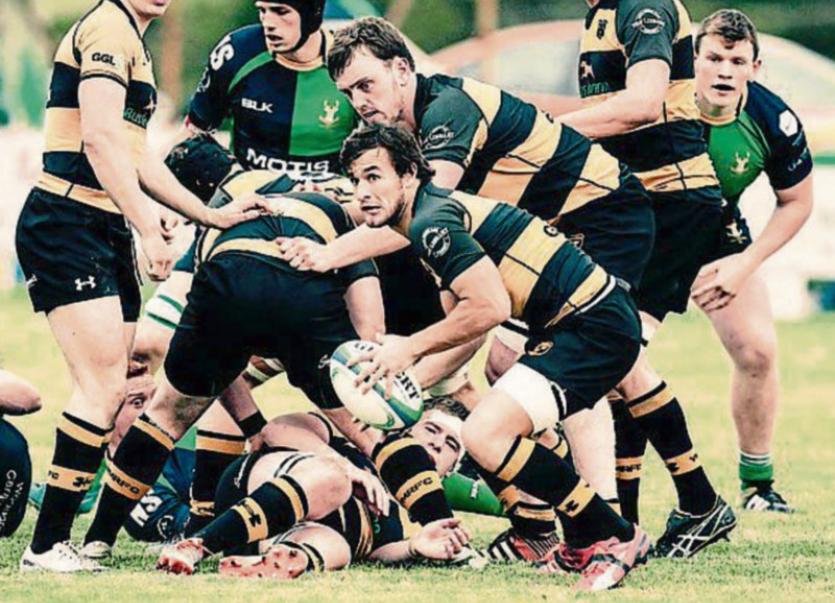 But modern rugby can be funny that way.

Griesel grew up on a sheep farm in Bloemfontein. His parents Jan and Riëtte also keep wildlife and run a guesthouse.

“Where I grew up is a little bit away from the big cities, Bloemfontein is an hour and a half away.

“We have 2,500 hectares of a farm and we keep about 1,200 sheep. We also have some wildlife, wildebeest, springboks, that kind of stuff.

“Our main business is a guest farm, we run a B&B on the farm.

“My dad Jan played rugby as well. He was flanker for Free State Cheetahs second team. That is where I got my love for the game.

“I started playing rugby at age seven at primary school. Growing up, Joost van der Westhuizen was my hero. He played on the South African team which won the World Cup in 1995. He was the icon of South African rugby.

“I went to a well-known rugby school, Grey College. The likes of Johan Goosen (who plays with Racing 92), Bismarck du Plessis, Francois Steyn also went there.

“I always played second team in school. From there I got a bursary for studying at University of Pretoria, Tuks, to study Sports Science.

“I had a trial with the Bulls at U-19 level. They signed me for three years. It was a big step in my life. I had a decision to make between playing rugby or going on with my studies.

“I decided to go on with the rugby. It was really hard work. Training at the Bulls was very intense.

However, the Baby Boks rallied and went on to lift the Junior World Championship trophy for the first time, beating New Zealand 22-16 in the final before 33,000 delirious supporters in Newlands.

“2012 was an awesome year, very special because the U-20 World Cup was in my home country. You had the likes of Jan Serfontein, the Springboks centre, on the team. Paul Jordaan, who plays for the Sharks, and Handré Pollard who has played with the Springboks too.

“We beat New Zealand in the final. It was the first time they didn't win it.”

But fate dealt the exciting young scrum half a cruel hand when Griesel sustained an unfortunate knee injury soon after.

“A few months after the World Cup I got a knee injury, tore my ACL. I was still contracted at the Bulls for another year.

“But nine months out is a long time. The Bulls got in some new scrum halves and stuff. It is tough, you lose shape and have to fight your way back.

“After that year they said they would not sign me again. They already had a few scrum halves. I went from Pretoria back to the Free State Cheetahs. I played Vodacom Cup there. Then the head coach of the Griquas in Kimberley asked me to play Currie Cup for them in the second half of 2013.

“I played a few games. But I decided that I would use rugby to travel around a bit. I spoke with my dad about it. I had the chance to go to Italy. My agent was working on it, but then the opportunity to play with Young Munster in Ireland came about.

“With the language barrier, I felt I would rather speak English than learn a new language.

“I knew CJ Stander was playing here with Munster. He was also contracted at the Bulls. He is two years older than me. We trained together and played a few games at Tuks. As soon as I came over we became really good friends.

“It didn't rain for my first week here. I told my dad, listen, it's not bad at all. Just as I said it I started raining and kept raining. I know it was quite a tough winter.

“You do get used to it, though, the way to play in the rain, the wet pitches, getting the longer studs out.

Twenty four year-old Griesel has settled in well to life in Limerick. The exciting half-back is studying management at Griffith College in the city centre and  also works in a coffee shop in Dooradoyle.

“South Africa is very big. I am not saying South African people are not friendly, but Irish people are well known for being very friendly.”

On the pitch, Griesel’s arrival last autumn co-incided with an upturn in Munsters’ AIL fortunes.

“I am getting used to the Irish slang. I find myself saying 'you're grand, you're grand'. My first language is actually Afrikaans. We did speak English, but not every day.

“The level of rugby at AIL 1A is very good. There are days when guys make a few mistakes, but the players are amateurs. There is loads of talent here. There are guys who could play at a high level in South Africa, premier league level.

“Coming from South Africa and hearing your own name pronounced by a supporter with an Irish accent, it drives you forward! It makes you feel really accepted.

“We won the Charity Cup earlier in the season. We are in the semi-finals of the All-Ireland League and the Munster Senior Cup. The club is in the Munster Junior Cup final too.

“The players want to push it through. It really could be a great year.”