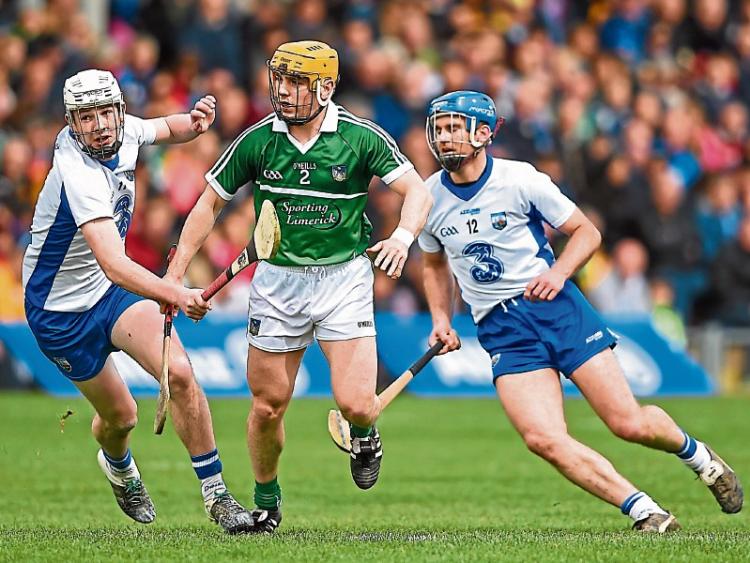 THREE second half goals eased Waterford past a weak Limerick challenge in this Sunday’s Allianz Hurling League semi final, where 3-23 to 1-18 was the final score.

Just one point divided the teams at half time but league champions Waterford totally took over in the second half to win by 11-points as the Limerick challenge wilted.

Limerick were 0-12 to 0-11 at half time after a 35-minutes in which the sides were level on nine occasions.

Both sides lined out with sweepers in their defences.

Limerick had a half back line of Diarmaid Byrnes, Paudie O’Brien and Gavin O’Mahony with Ronan Lynch as sweeper. Paul Browne and James Ryan were in midfield with Kevin Downes and Barry Nash in a two-man full forward line.

It was James Ryan that opened the scoring but two Colin Dunford points had Waterford ahead on three minutes.

Barry Nash, Diarmaid Byrnes and Tom Morrissey all hit back and TJ Ryan’s side were 0-4 to 0-3 ahead on eight minutes.

Within six minutes it was Derek McGrath’s side that were 0-6 to 0-5 ahead and the clock was in the 14th minute of a tie that was swinging end-to-end.

A Ronan Lynch free and a Paul Browne score from midfield leveled for the seventh time.

Then came a Limerick surge with Tom Morrissey getting his third of the day to help the men in green into a 0-10 to 0-8 lead – the first time two points were between the teams.

But soon normal order was restored at 0-10 each.

The Limerick interval lead was assured when Lynch (free) and a second point of the half from wing back Byrnes brought Limerick to 0-12.

Patrick Curran had his sixth pointed free to end the scoring and send Limerick into the dressing room one point ahead.

A Lynch free was the first score of the second half but then came six successive scores from Waterford to open a 1-16 to 0-13 lead as Limerick failed to match the increase in tempo and intensity.

Mid-way through the half Limerick appeared to settle and it was 1-17 to 0-17 with 15-minutes to play.

But it was a half that saw just two scores from play for TJ Ryan’s side and just two scores in the final 15-minutes – including an injury time Shane Dowling goal from a free.

Indeed that goal was answered within second with Tom Devine getting the third Waterford goal.

Waterford move onto to a May 1 league final and Limerick are left to regroup for a June 19 Munster SHC tie with Cork or Tipperary.