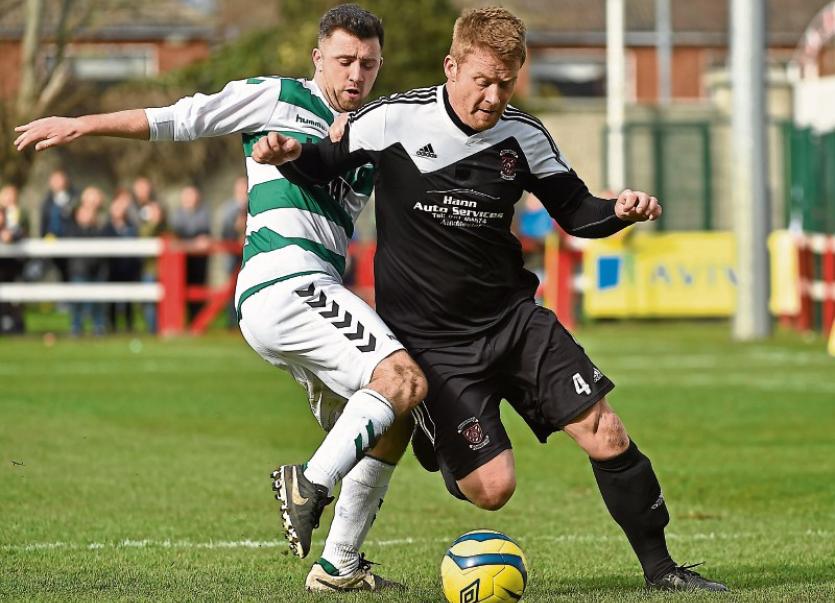 After their success in the FAI Junior Cup last weekend, Janesboro turn their attention to Munster Junior Cup on Sunday when they host Killarney Celtic looking to join fellow Limerick club Moyross in the last four.

Shane Clarke's penalty kick against Newmarket Celtic gave Boro victory last weekend and it keeps alive the hopes in a sextuplet of competitions.

Already in the final of the Tuohy Cup and Munster Champions Cup, they are in the last four of the FAI, a win on Sunday would propel them to the semis of the Provincial tournament and in the League they trail leaders Regional Utd by nine points but have games less played.

It is vital 'Boro treat each match as they meet it and not be looking too far forward.

On Sunday they meet a Killarney Celtic currently lying third in the Kerry League. Killarney defeated Shannon Town 1-0 to qualify for Sunday's game and a 7-2 win over Castleisland last weekend will have given them a boost going into Sunday's tie but they may find the home side a tougher proposition.

The Kerry side have been finding clean sheets hard to come by and facing an in-form 'Boro front line could cause sleepless nights.

For all the power they possess in attack it was their defence who took the kudos last weekend with John Boyle, Thomas Clarke and Aidan Hurley all playing a starring role in the win.

The combination of both should see the 'Boro safely through to the last four.

On Saturday afternoon Fairview youths face a difficult task away to Clonmel Town in the FAI Youth Cup while on Sunday the LDL hopes rest with Nenagh as they travel to Crumlin in the FAI Under 17 Cup.

There are two games fixed for the Lawson Cup with Nenagh AFC looking to continue on their merry way when they host Division 1A side Granville. In the second tie Holycross welcome Athlunkard Villa in what could prove a sticky assignment.

The top three sides are in action in the Premier League with leaders Regional hosting a Geraldines side chasing their fourth consecutive win.

The Leaders shared the spoils in a drab encounter with Carew Park last weekend and they will need to show more adventure in front of goal if they hope to keep their title hopes on track.

Geraldines for their part have reshaped the side after a umber off defections and will not make life easy for the Dooradoyle side.

Any slip up by the leaders would see the winners of the Fairview Rgs v Carew Park clash take over top spot.

Fairview were bitterly disappointed to have exited the Munster Junior Cup to Moyross and now see the League as their main hope of silverware this season.

Carew Park have lost two and drawn one of their last three games and need a change in fortune to reboot their title charge. They are still in good shape to regain the Fran Mullally Trophy but need to start believing they can do it for it to become a reality.

Following a disastrous result last weekend going down 1-0 to Summerville, Mungret Reg are in dire need of points wherever they can get them from and on Sunday they welcome a Moyross side in the hope that one eye on their upcoming MFA Semi Final could leave the Northsiders vulnerable.

The remaining Premier tie is what would be considered a mid table clash between Ballynanty Rovers and Aisling Annacotty where the pressure is really off both sides even at this early stage of the season.