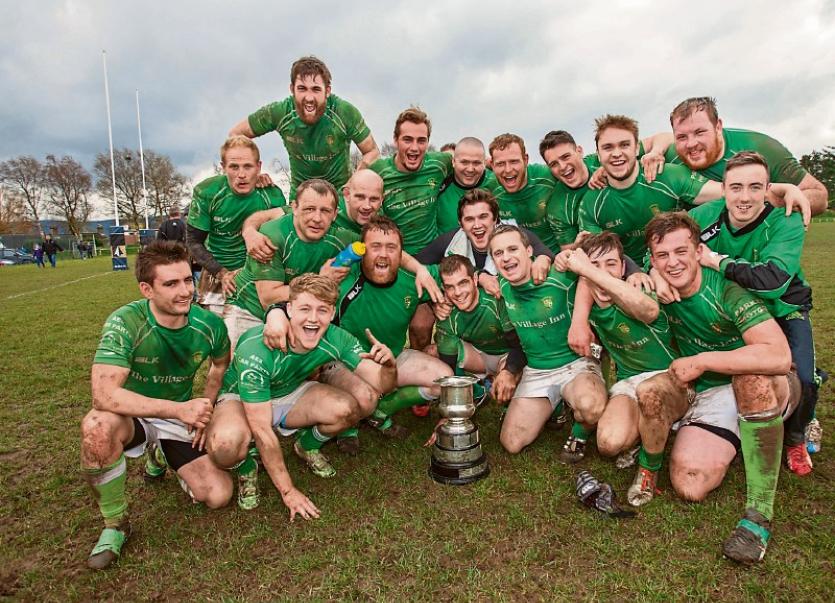 THEY had to survive intense pressure in the final minutes of Sunday’s final of the MJ Challenge Cup in Clanwilliam, but it was Richmond who were celebrating their first piece of silverware at the final whistle having secured an exciting 14-8 victory over Galbally.

The city side had the better of the first half and could have had a bigger lead than the six points they took into the second period. The tension of the game was clear in the early stages with Richmond’s Briain Bennett and Galbally’s Jack O’Mullane missing close-in penalty chances but Bennett found his range with 24 minutes played to put his side 3-0 in front after strong pressure from the green and white pack had forced another tee shot at the posts. Six minutes later it was 6-0 to Richmond, out-half Wayne Murphy slotting over a neatly-taken drop goal, a lead that they held until half time.

Five minutes into the second period Richmond increased their advantage to 11-0 when Briain Bennett got in for his side’s only try and at that stage it looked as if the Canal Bank side was going to coast to victory. Galbally then stepped up a gear and after Bennett and O’Mullane traded penalties, this game really came to life when wing forward Jack Hogan got over for a Galbally unconverted try to reduce the lead to six points with 15 minutes remaining.

It was really backs to the wall stuff for Richmond from there to the final whistle and it took a try-saving steal at the breakdown a metre from their own line by winger Evan O’Connor at the final play of the game to deny Galbally of a dramatic late win.

“It’s our first trophy of the season,”a delighted Richmond press officer Natalie McNamara told us after the game. “We had great support here today, which inspired the team, and with an important league game coming up against Old Christians, the final of the Transfield Cup against UL Bohemian and the semi-final of the Bank of Ireland Munster Junior Cup yet to come, we are going to have an exciting finale to our season.”

Galbally were disappointed with their first half when they failed to any points on the board: “When we went 11-0 down it looked like we were dead and gone but full credit to our lads who put in such a fierce effort in the final quarter,” their spokesman Jim Stapleton told us.