'As big as it gets', says Foley ahead of latest Leinster clash 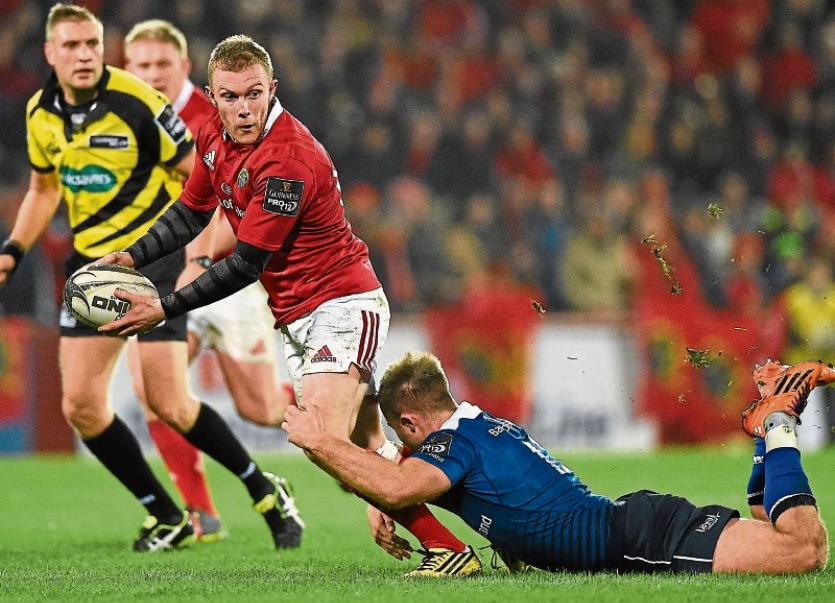 MUNSTER head coach Anthony Foley admits that games don’t come much bigger than their PRO12 one with Leinster at the Aviva Stadium on Saturday evening.

Foley’s side are currently in fourth place in the competition, five points off Scarlets in third and seven behind this weekend’s opponents Leinster.

It is a crunch game for Munster and Foley admits that there is plenty hanging on Saturday’s fixture for both teams.

“A lot of fellas that spent a lot of time together over the last two months will be coming up against each other with different jerseys on.

“I think this is something that we are into the run-in in the league. Everyone is still vying for position, and trying to make sure they secure Europe first and foremost.

“The most important thing is there will be two very good teams going after a win, making sure that they win. So it will lead to a very competitive game I’d imagine.

Munster go into this game after a big win against Zebre and Foley was keen to highlight the impact out half Johnny Holland had on the performance.

The Corkman’s last performance in the Munster red was in November 2014 when he suffered an injury very similar to the one that brought Paul O’Connell’s career to an end.

“It’s important that we get players through our academy, which is getting a lot of press at the moment.

“They love the jersey, they're brought up watching it and dreaming about playing for Munster. For them to get an opportunity just lifts everyone else around them.”

Neither side are going into this weekend’s game with a European Quarter-Final on the horizon but Foley believes that’s just the reality of where Irish rugby is currently.

“There's a lot of things that have changed in the Irish game at the moment. There's a generation that have gone, whether that's through retirement or moving on. There's a group of players now that need to find themselves.

“Unfortunately at times... you take last year and there was 80 minutes this year and 80 minutes last year, you lose those games and suddenly you don't get another 80 minutes at this time of the year.

“That kind of experience everyone needs to understand and at times, that's the harsh reality of professional sport.

There are plenty of sideshows to pay attention to at the weekend as this game is also effectively a trial for Ireland’s tour to South Africa in the summer but Foley insists that his players will be focused on the collective rather than the individual.

“We look at the whole part of it. As a coaching group we don’t pick out individuals. Trying to pitch fellas against each other but those days are well and truly gone.

“It’s about the group rather than the individual. We understand to get into the top four, is the most important thing and part of doing that is to get the result in the Aviva on Saturday because that is our main focus.