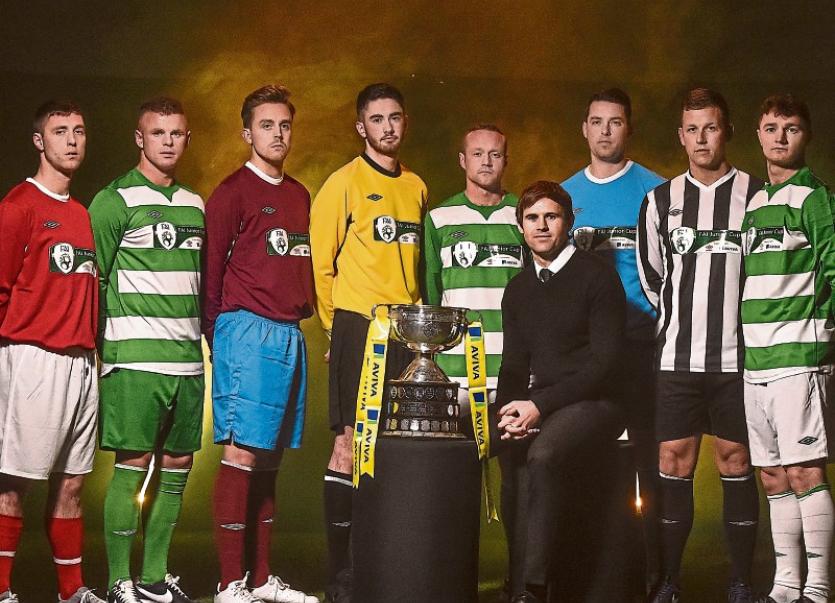 IT was a great day for Limerick Soccer with Pike and Janesboro reaching the semi finals of the FAI Junior Cup with wins over Glengad and Newmarket Celtic respectively.

For their reward Janesboro travel to Sheriff while Pike Rvs are also on the road against St Peters from Athlone.

Pike Rovers qualified for a place in the last four of the FAI Junior Cup with a comfortable win over Donegal side Glengad at the Pike Club on Sunday afternoon.

Two goals midway through the first half gave Pike a firm grip on proceedings and while they were reduced to ten men before the break the Pike goal was rarely troubld by the visitors.

Much of the credit for that goes to Pat Mullins who led the defence superbly. In the middle of the park Shane Walsh gave a man of the match display with the perfect mix of  aggression and commitment that saw him win countless balls from the opposition.

Up front Eoin Hanrahan was a constant thorn in the visitors side while Wayne O'Donovan made some vital interceptions when redeployed as a full back.

The first chance of note came on ten minutes when Pike were awarded a corner kick. A trademark Eoin Hanrahan delivery caused panic in the Glengad defence but Wayne Colbert's scuffed shot was cleared off the line by McLoughlin.

Five minutes later another Hanrahan corner kick saw Sean O'Callaghan's header deflected out and from the resulting kick Pat Mullins knocked the ball down for Eddie O'Donovan who volleyed over the top from close range.

Good work from John Connery put Wayne O'Donovan away on the right and his cross was taken off the head of the waiting Cian Collins by keeper O'Donnell.

Pike took the lead on 25 minutes. More good work from Mullins saw the ball reach Wayne O'Donovan on the right. He crossed to the back post where Hanrahan headed the ball across the goal line where John Connery applied the finishing touch despite the best efforts from O'Donnell. A minute later, before the celebrations had died down, Pike doubled their lead.

Steve McGann won the ball in the middle and played Cian Collins in on goal and the striker kept his cool to poke the ball past the advancing O'Donnell in off the post. Pike were on easy street but a red card for Wayne Colbert ten minutes from the break put a different perspective on the game. The visitors, buoyed by the turn of events, began to pile the pressure on but found Mullins and Co. too difficult to get by.

Their best chance saw McDermott play McMonagle through but from ten yards he blazed the ball over the top.

We were expecting much of the same from the restart but Pike got the perfect start when O'Donovan played Connery away on the right and his inch perfect cross picked out Hanrahan six yards out and he headed home to make it 3-0.

Pike were content to just contain Glengad and needed a superb save from Gary Neville to deny McDermott.

With the spectators awaiting the final whistle a long ball presented Connery with an opportunity that he buried from an acute angle to finish the game in style.

Janesboro ensured they would join Pike in the last four with a hard earned win over Clare side Newmarket Celtic.

A first half penalty kick from Shane Clarke was what separated the sides at the end of a tough encounter which saw the home side reduced to ten men ten minutes from time.

Following their win over Pike Rvs last weekend, there was much anticipation in a large home support, that they could turn over Janesboro but they were unable to pierce a solid defence.

John Boyle picked up the man of the match award holding off creditable claims from Thomas Clarke, Aled Harkin and Steven Bradley.

The home side started brightly and in the opening ten minutes had a couple of chances. Eoin Hayes blazed over following good work from Brigdale and shortly after  Hayes and Cullinane saw the latter let fly with an effort  that struck Tom Clarke, and although clearly hurt, the Boro defender got up to make a second block before receiving attention.

On 15 minutes Shane Clarke tried to slip John Tierney through but an interception by Stephen Kelly led to a quick breakaway from which McCarthy let fly from distance. Boro keeper Stephen Walsh parried the effort and John Boyle was on hand to mop up the danger.

Shortly after John Tierney had the ball in the net but a dubious offside call silenced the celebrations.  However ten minutes from time Tierney turned Kelly in the area and the attempted recovery challenge was deemed foul by the Referee and Shane Clarke expertly converted the spot kick.

Just before the break 'Boro had a great chance to double their lead when a miss by the home keeper saw the ball unexpectedly reach Lee O'Mara but he could not keep his header on target.

After the restart Shane Clarke got above Pat Purcell but could not get enough power on his header to finish and at the other end Hayes was in good position ten yards out but a moment's hesitation allowed Lee O'Mara to get the required interception.

Midway through the half 'Boro were guilty of not clearing their lines and McCarthy let fly with a fierce shot, blocked by a sliding John Boyle to keep the visitors in front.

A long range free kick by Shane Clarke was narrowly over and the final ten minutes saw the home side throw caution to the wind in search of an equaliser but their cause was not helped when Purcell let the field to a red card.

In fact the best chance fell to Boro when a quick break by Waters saw him cross for Mike Hogan who stepped over the ball as Shane Clarke teed up but he fired off the crossbar.

Regional United B team went close to causing the shock of the season when they met the might St Michaels on Saturday afternoon for a place in the semi finals of the Provincial competition.

The Jason Scanlon and Julian Lyons led Bee's were considered no hopers when drawn against one of the best sides in the country. Allied to the fact that the Saturday fixture saw them lose a number of key player the Club did the city proud despite going out by the odd goal in three.

Fielding a very young side Regional were in no way overawed by the occasion and when Evan Patterson gave them a first half lead the Saints were rocked back on their heels.

An injury time equaliser at the end of the first half led one to believe that the home side would up the tempo in the second half and run out comfortable winners but Regional matched them in all facets until a goal midway through gave the homesters an advantage they clung to until the final whistle.

Regional took the lead when Evan Patterson latched onto JJ Hartigan's long kick out and slotted the ball home.

It looked like United would take the lead in at the break but deep into injury time David Grincell scored a well worked equaliser.

Regional were forced to defend for long stretches of a second half in which Mike Reidy was superb for the Limerick side.

Midway through Irish International Paul Breen got the breakthrough and the relief was evident for the homesters.

Regional went all out for an equaliser and had good chances when Patterson broke clear but he lost his footing at the crucial moment.

Regional bravely picked the occasion to give Junior debuts to Lee Boyle and Nathan Walsh and the latter nearly snatched an equaliser but his well struck shot was well saved.

Goalkeepers for both sides hardly had a save to make throughout the ninety minutes as defences dominated and forwards struggled.

It was not the required result for w=either team as the destination of the Fran Mullally trophy is now out of their hands. That said there is much still to be played for and plenty of twists yet to come.

The first half hour of the game was dreadful with neither side putting any sequence of passes together. The first real talking point came ten minutes before half time as Paudie Walsh chased a through ball. Carew Park's Gordon Stewart, racing from his goal, seemed to have the situation under control but slipped at the vital moment which resulted in him handling the ball outside the box. Luckily for the veteran keeper referee Mike Kiely was unsighted.

Ten minutes later at the other end Kieran Hanlon delivered a free kick into the danger zone which tempted Rob Shier from his line. Jonathon Grant got to the ball first but his header looped just over the top with the keeper stranded.

Five minutes into the second half, Mike Lyons played a superb through ball for Walsh who cut inside his defender but drilled his shot inches wide of goal.

Minutes later Carew substitute Keegan Park spread the ball wide for Jamie Enright who delivered to the back post to Tommy Culhane but his volley flew across goal and wide of the far post.

Fifteen minutes from time more good work from Park teed up Jonathan Grant with a good chance but he smashed his effort off the upright. Two minutes later the same two were involved again, this time Grant putting Park through on goal but a superb last ditch tackle from David Cowpar saved the leaders. The Regional defender was to the fore again minutes later when Regional's attempt to play Carew Park offside backfired leaving three attackers closing in on the visitors goal but a superb recovery from Cowpar saw his intercept at the expense of a fruitless corner. As the game petered out Mark Slattery volleyed just wide of the Regional goal and the last chance of note saw Jonathan Summers deliver a dangerous cross from the left which saw Shier make a fine save to turn out to safety.