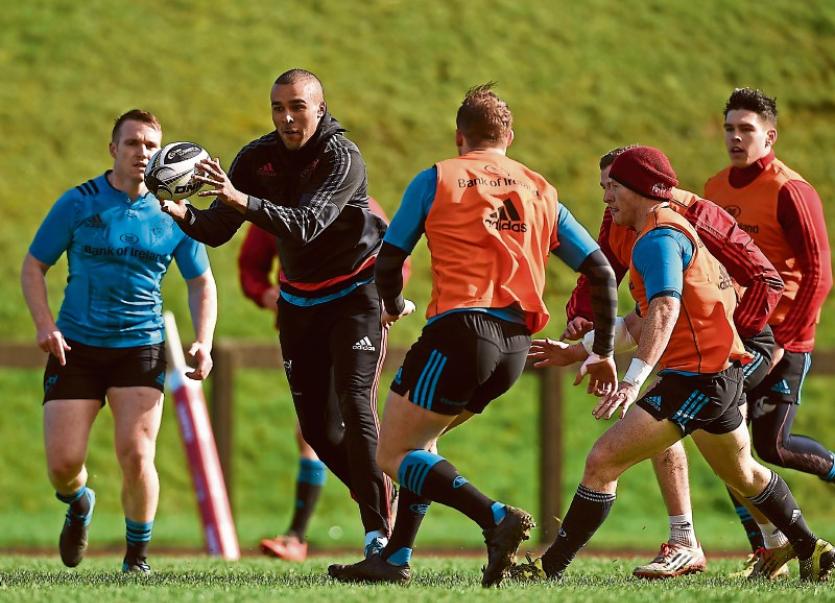 Simon Zebo in action during training for Munster

MUNSTER head coach, Anthony Foley has made three changes to his starting line-up to face the Newport Gwent Dragons at Thomond Park on Saturday night with Simon Zebo, Stephen Archer and Niall Scannell set to start.

Following his 6 Nations involvement against England in Twickenham last weekend, Zebo has been made available to the province and will make his first appearance in red since January.

Prop Stephen Archer also makes a welcome return to the matchday squad after successfully overcoming a neck injury that has kept him sidelined since October. Should he make an appearance from the bench, the tighthead will win his 100th Munster cap.

The first of two changes to the pack sees hooker Niall Scannell re-join Dave Kilcoyne and John Ryan in the front row. Mark Chisholm and captain Billy Holland continue in the second row while in the back row, Tommy O'Donnell returns at 7 with Dave O'Callaghan and Jack O'Donoghue switching to 6 and 8 respectively.

Zebo starts on the left wing in an otherwise unchanged backline. Duncan Williams and Ian Keatleyform the half-back partnership and Rory Scannell makes his tenth consecutive start at inside centre in partnering Francis Saili in the midfield.

If called upon from the bench, recent long-term injury returnee Johnny Holland will make his first appearance of the season.

Elsewhere, this week saw Mario Sagario called up to the Uruguayan international squad for the Americas Rugby Championship. The Munster tighthead will start against the USA in Montevideo tomorrow.