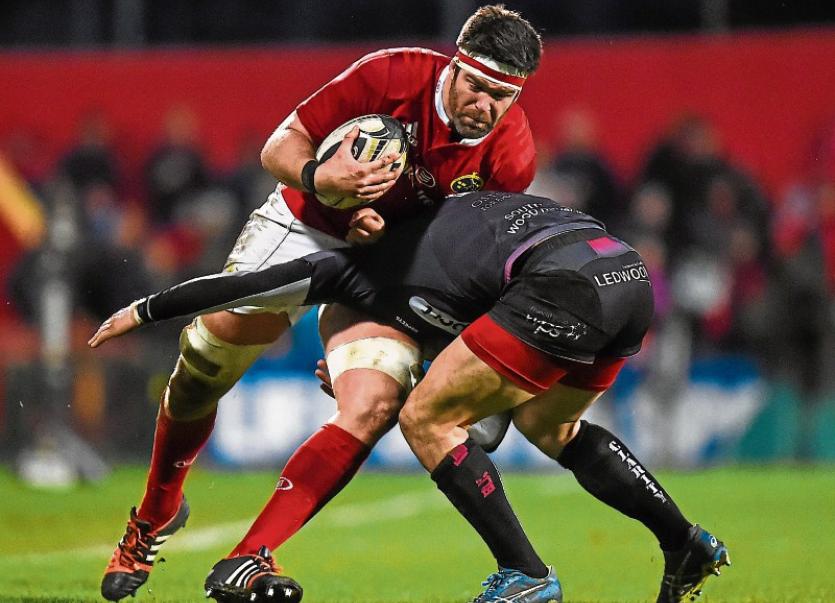 MUNSTER’S hopes of securing a play-off place in the Guinness Pro12 suffered a significant blow with a disappointing 21-17 defeat against the Ospreys at Musgrave Park last night.

Munster supporters in an official attendance of 7,791 went away disappointed as Munster suffered their first defeat in Cork in three years despite scoring three tries.

The home side surrendered a seven point lead, 17-10, after 54 minutes with a gritty Ospreys side scoring 11 unanswered points in the final quarter.

The defeat leaves Munster languishing in sixth place in the Guinness Pro12 table, a full seven points off the top four. Anthony Foley’s charges have nine fixtures to go beginning with Friday night’s difficult tie away to Glasgow, 7.35pm.

The significance of last night’s game cranked up several notches prior to kick-off with wins for fellow top four chasers Leinster, Connacht, Ulster and Scarlets.

After a scrappy opening period, Munster struck for the game’s opening try, an opportunist score from Duncan Williams in the 12th minute. The scrum-half charged down a clearance kick from Ospreys captain Brendon Leonard before running in unopposed. Keatley converted.

The warning sings were there for Munster when it took a superb cover tackle from former Cork hurler Darren Sweetnam to deny Ospreys winger Tom Grabham scoring an intercept try soon after.

The Ospreys refused to be denied however, and after some excellent off-loading out of the tackle in the 25th minute, out-half Sam Davies touched down. Davies also converted to tie up the scores at 7-7.

Munster responded in the best style possible, thanks to a stunning solo try from centre Francis Saili when the All-Black used his devastating stepping skills to leave a host of Ospreys defenders trailing in his wake as, carrying the ball in one hand, he powered his way over the tryline. Keatley’s conversion hit the upright.

Munster stretched their 12-10 interval lead to 17-10 after 54 minutes when number eight Robin Copeland benefited from a terrific Sweetnam break to grab a third try.

However, Ospreys upped their performance with the introduction of their Welsh scrum-half Rhys Webb and a further Davies pernalty and try from Owen Watkin on 60 minutes saw the Welsh region into an 18-17 lead.

The excellent Davies sealed the win for the Ospreys when kicking his third penalty goal on 77 minutes.