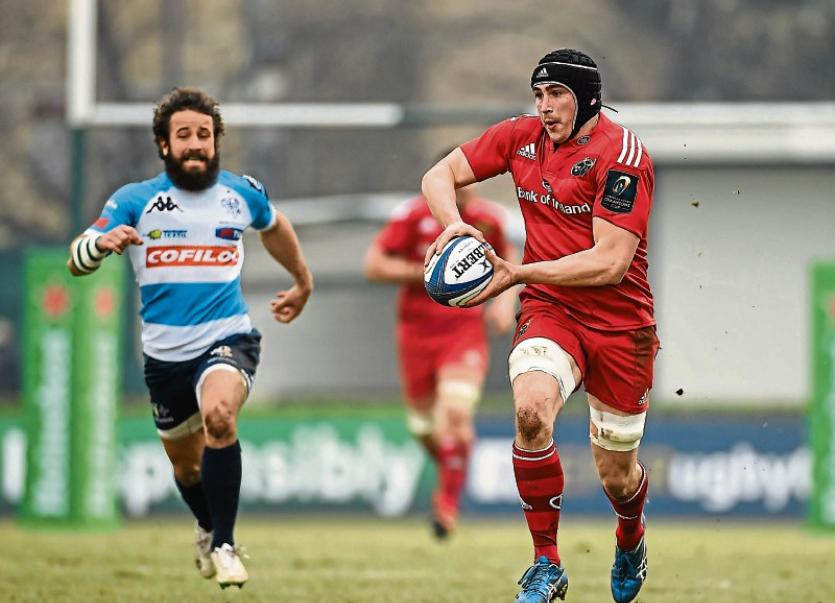 MUNSTER signed off from the Champions Cup for this season with a comprehensive 28-5 bonus point victory over a hapless Treviso side at Stadio Monigo on Sunday.

Munster's slim hopes of progressing to the quarter-finals had disappeared with pool results elsewhere over the weekend, so Anthony Foley's charges had nothing more than pride to pay for.

Munster produced a mixed diaply in their final Pool 4 fixture, with their enterprising approach ha

Munster outscored their opponents by four tries to one, with winger Ronan O'Mahony helping himself to a brace, while prop Dave Kilcoyne and scrum-half Conor Murray also touched down.

The visitors made the perfect start when winger O'Mahony glided through the Treviso defence to score in the fifth minute after scrum-half Murray took the ball off a maul. Keatley converted for 7-0.

Munster added a second try in the 17th minute when Dave Kilcoyne burrowed over from close range to score his fifth try in European competition. Keatley added the extra for a 14-0 lead.

Munster looked to run the ball from deep from the first whistle, aimin to add to their points tally against opponents who are seriously lacking in confidence. However, Munster were guilty of forcing things which resulted in promising moves breaking down.

After Billy Holland was sin-binned following a Treviso maul, the home side's flanker Marco Lazzaroni burrowed his way over the tryline following another maul.

Munster, who led 14-5 at half-time, added a third try in the 48th minute when Conor Murray sniped through a gap following a line-out inside the Treviso '22 before touching down. Keatley added his third conversion to give the visitors a 21-5 lead.

Munster secured the bonus point in the 68th minute when O'Mahony scamapered clear to bag his second try of the game.