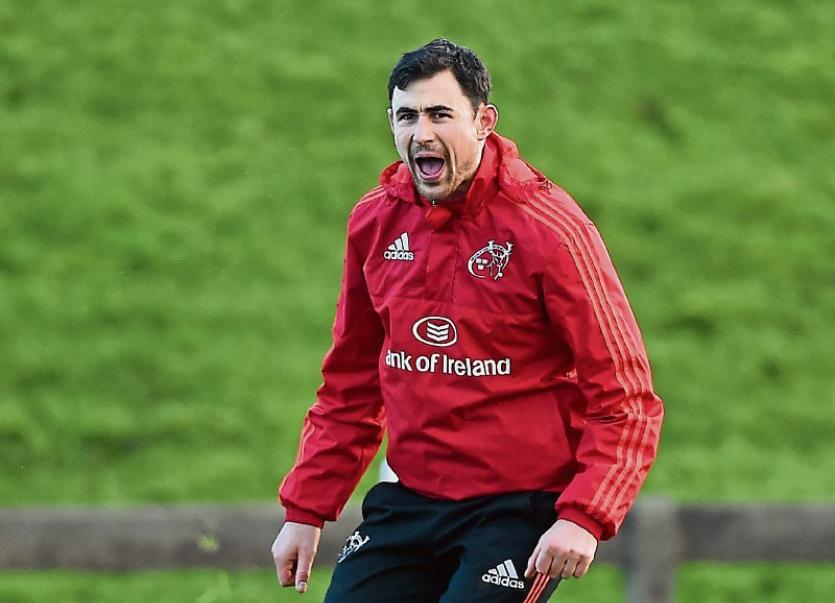 MUNSTER fans were saddened earlier in the season with the news that full-back Felix Jones had been forced to retire last October.

Having sustained a neck injury during  Munster’s round 3 PRO12 encounter against Glasgow Warriors in Thomond Park, the ighly popular Jones was advised to retire from rugby.

The 28-year-old has made 90 appearances for the province, scoring ten tries.

Spectators at any of Munster’s training sessions in recent weeks may have been curious as to why the retired Jones was in attendance.

Foley said: “Felix is doing a Masters in Sports Psychology with Tadhg MacIntyre, our sports psychologist (‎Lecturer in Sport & Exercise Psychology at University of Limerick) so it's a good period of time for Felix to be in and around the group if that's your goal because there's a lot of stresses and strains and pressures in that area at the moment.

“So it's a good time, he's a good lad as well in terms of having a voice and he's still one of the lads to be honest with you.

“It's not a role, he's been in and around the place, it's part of his research. It feels like he never left. You go in there most days and he's sitting on the computer. He's still one of us and he's never gone away.”

COULD Saturday be the last ever time that Munster face a European fixture at the venue currently known as Thomond Park?

By the time next season’s European Champions Cup and Challenge Cup competitions get underway next October, it is possible that Thomond Park will have a new title sponsor.

Munster CEO Garrett Fitzgerald announced last week that a consultant had been employed by the province to examine selling the naming rights to the famous old rugby venue.

The contentious issue of selling the naming rights on Thomond Park has been mooted on a number of occasions since the stadium re-opened in 2008.

Industry sources told the Limerick Leader that Munster could have made €750,000 per annum from any deal for Thomond Park at the height of the economic boom.

However, the estimated asking price was said to be closer to €350,000 per annum as a result of the downturn.

With the economic outlook for the region now looking more positive, Munster are again looking at selling the naming rights of the famed rugby venue.

Fitzgerald told the media briefing at the Castletroy Park last week that while the issue of selling the naming rights was an emotive one for some people, it was a common occurrence in modern professional sport.

The naming rights of Musgrave Park were sold to the Irish Independent when the stadium was redeveloped in 2014.

So will any move to sell the naming rights to Thomond Park be met with the same level of opposition as previously?

It is a means used by clubs to make money. And God Knows Munster could do with a cash injection right now as it struggles to be able to offer the same attractrive terms to overseas players which the top clubs in the Aviva Premiership and Top 14 can extend.

So with falling attendances at Thomond Park, Munster are finding it tough to compete. Should a title sponsor be found for Thomond Park in time for the start of the next European game to be staged at the venue, the crucial thing is that the revenue Munster receive is spent wisely.

It is the least that the famous old venue and Munster rugby fans deserve. The supporters shouldn’t tolerate anything less. Munster fans will watch with interest.