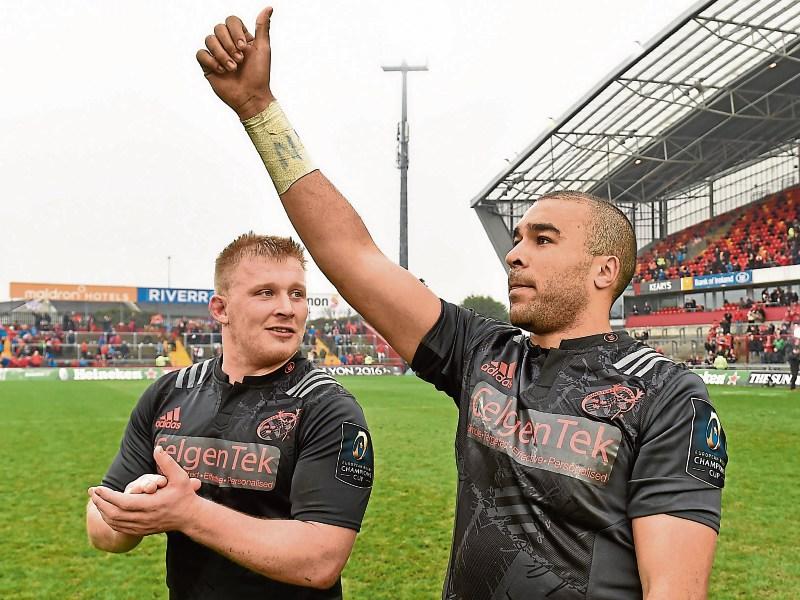 RESILIENT Munster ended their worst ever run in the European Cup when scoring an impressive 26-13 bonus point victory over Stade Francais in their Pool 4 fixture at Thomond Park on Saturday.

Munster scored four tries, two in either half, to end their three game losing run in Europe and at least partly lift the air of doom and gloom which had hung over the province in recent weeks.

That defeat at Stade Jean Bouin had already ended Munster’s hopes of progressing to the knock-out stages of the Champions Cup. However this was a good response from Anthony Foley’s charges who led 12-6 at half-time.

While there were 18,884 tickets sold for the fixture, an actual attendance of more than 14,000 was more than decent and the home supporters will have been pleased by how their side responded to their recent poor run.

A terrific individual try from Keith Earls on the strke of half time proved a key score as it rattled the French visitors who were hoping to pick up a vital win in other to boost their quarter-final hopes.

After Munster had fallen behind to a second minute penalty goal from the boot of Stade Francais out-half Morne Steyn, the home side hit back with a 19th minute try from hooker Mike Sherry following a well-executed driving maul.

A moment of individual magic from winger Keith Earls just before the break, saw the Ireland winger wrong foot the Stade defence with a well timed sidestep before racing clear to score Munster’s second try. Keatley’s conversion was a ‘gimme’ and the home side suddenly led 12-6 at half-time.

Watching Ireland coach Joe Schmidt could only have been impressed by Earls’ display and that of Munster captain CJ Stander who was simply immense all through.

Munster made the perfect start to the second half when Ian Keatley’s perfectly judged dink in behind the Stade defence bounced kindly for Simon Zebo and the winger raced clear to score. Keatley duly slotted the conversion for a 19-6 lead after 42 minutes.

Munster were reduced to 14 players in the 49th minute when winger Ronan O’Mahony was yellow-carded as he collided with Stade full-back Hugo Bonneval who was jumping for the ball in the air.

Munster gifted Stade a way back into the game in the 63rd minute when the home side messed up a line-out on their own ‘22 and flanker Jonathan Ross raced through to score. Steyn’s conversion made it 19-13.

However, Munster responded in style, forcing a penalty deep inside the visitors half. Scrum-half Murray took a quick tap and when he was stopped short of the line the powerful Stander was on hand to score. Keatley’s conversion made it 26-13 with 12 minutes remanining. It proved to be the final score of the game.