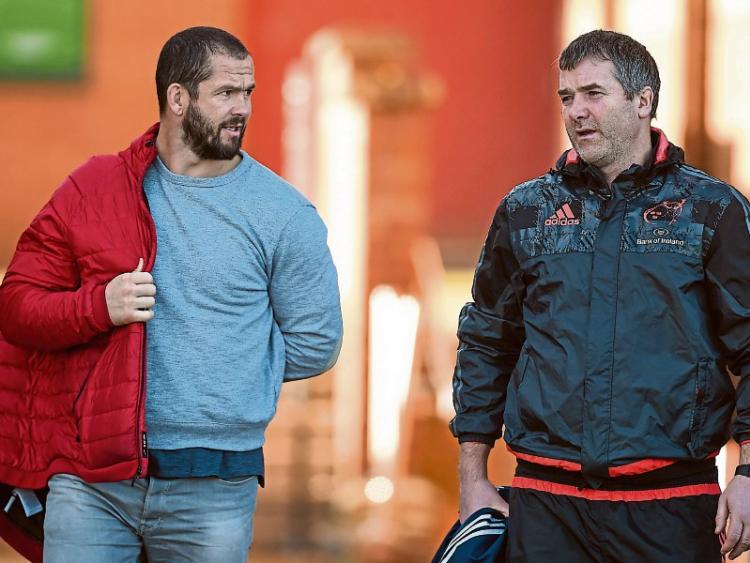 MUNSTER head coach Anthony Foley insisted the addition of Andy Farrell to his backroom team in an advisory role was an opportunity he simply couldn’t turn down.

Munster confirmed on Tuesday that Farrell will join the province in an advisory role with immediate effect for the rest of the season.

Foley said: “It (Andy Farrell’s role) is not an on-pitch job. My view of it is pretty simple. This was an opportunity I could not turn down.I wouldn’t be able to live with myself if I said no.

“There is no hiding from the fact we are on a bad run of results leaving the Ulster one to one side. We need something that has an ability to lift.”

Foley said a victory this weekend on the back of last weekend’s very poor performance in Paris would provide a timely boost to the squad and to members of his own family.

Last weekend was the first time that Munster had lost three successive games in the European Cup, with the defeat against 14-man Stade Francais ending their hopes of making the quarter-finals.

Foley said: “A win this weekend would give a lot of confidence to the players, give a lot of belief back into the group, to the people around the group, might take a bit of pressure off our family and friends, the stick that is being given out.

“Because, being honest with you, it is a cocoon at times. I often think, ‘I would hate to be yer man Anthony Foley out there because he is obviously getting an awful doing!’ I don’t feel it, I don’t see it.

“We trained today (Tuesday) and we trained with good volume in it. Hopefully we see that out on the pitch.”

Foley stressed the need for supporters to turn out in large numbers at Thomond Park on Saturday. While 17,000 match tickets had been sold mid-week, there are fears that only a small percentage of that number of supporters will attend the game.

Foley added: “It’s important that the boys are supported. I think it’s easy to support a side on the crest of a wave, but sometimes this is the moment where we see what the supporters are about.

”From my experience with them, these are the times where they’ve stood up and lifted the team. I go back to 2000 in Twickenham, I think we were at the bottom of a barrel and we were lifted, and we got a bit of momentum then going forward. I just think it’s important that now we see our true supporters and the people who stand by us.”

Munster hooker Mike Sherry said the recent run of poor results was a cause for some sleepless nights since the weekend.

Sherry said: “No thankfully not and we are hoping it’s a once off. It’s tough, it is very tough. People and players they are just, I wouldn’t say a lot of us have slept very well since the weekend.

“It’s not for lack of trying, I can promised you that. It is a tough situation. It is a bit of a vicious cycle at the minute.

“We need a performance to get us out of this, and we need to back up that performance a few weeks in a row.

“It doesn’t work like that. It is tough but I have faith in this group, and I have belief in what we are doing. It will come right eventually. And I am hoping this weekend is the start of the turning of the tide.

“We have everything to play for on Saturday. We are playing in Thomond Park in Europe against a French team. I am playing in a rugby team with my closest friends.”