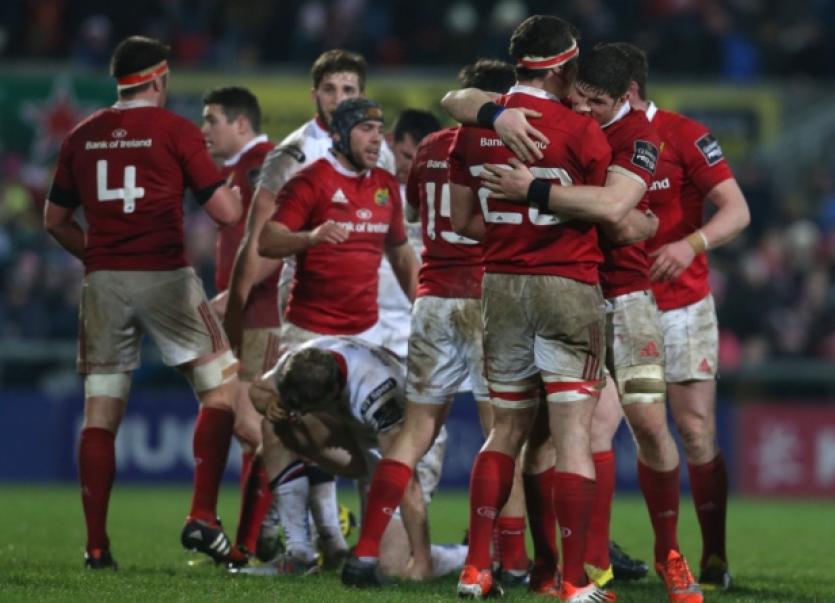 MUNSTER out-half Ian Keatley hopes Saturday’s spirited victory over Ulster in the Pro12 can propel the side to a much-needed Champions Cup victory next weekend.

MUNSTER out-half Ian Keatley hopes Saturday’s spirited victory over Ulster in the Pro12 can propel the side to a much-needed Champions Cup victory next weekend.

Keatley turned in a Man of the Match display, kicking all nine points as the province’s ended their five-game losing streak in all competitions.

Munster’s first win in Belfast since Octber 2010 was a timely boost for the province ahead of Saturday’s crucial Champions Cup Pool 4 clash with Stade Francais at Stade Jean Bouin in Paris.

Keatley said: ”That win was huge. we were on a bad losing streak. A lot of the things we talked about over those weeks we haven’t been doing them in the games.

”I think we saw the things that we had been talking about doing today. We worked hard for each other. We weren’t doing that much stuff wrong, but we we were just sloppy, lads knocking off the execution of things.

”We had been talking about those for the last few weeks and we executed tonight. This place is a fortress to come to and we are just delighted to get the ball rolling again.

”It’s Europe now for us for the next three weeks. Even though Ulster had the lead at half-time, they went through 20 plus phases to score their try. If you are going to make a team work that hard to score a try, fair play to them.

”We just stuck together, worked hard and credit to the coaching staff they put in a good gameplan and we executed it well tonight.

”We will enjoy tonight. We have Stade Francais next weekend and that will be our focus to get back on track in Europe.”

Meanwhile, Munster head coach Anthony Foley said he hoped the province could kick on from their narrow inter-pro victory at Kingspan Stadium.

“We were in a bit of a fight, a bit of a quandary, after losing five games on the bounce. We needed to get some momentum.

“Our training and preparation during the week has been excellent for the last five weeks. Just at times when we were out on the pitch we weren’t getting that bounce.

“Paddy (Jackson) was unlucky with one of the kicks and we were lucky under the posts when I think Frankie (Saili)  knocked it on.

“We had a bit of luck there so hopefully it’s turned a small bit now and we can kick on with that. The boys fought hard out there. It wasn’t pretty at times but our 9 and 10 managed the game well.

“After a shaky start to the second half, we played them in their own half and forced them to go from deep.”