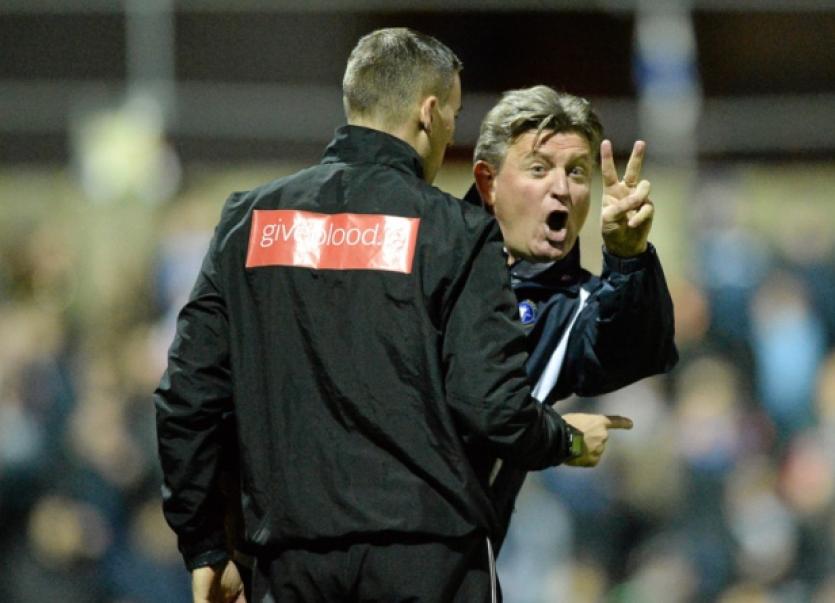 LIMERICK FC manager, Martin Russell admitted watching his side lose their Premier Division status at Finn Park left him with ‘a terrible feeling.’

LIMERICK FC manager, Martin Russell admitted watching his side lose their Premier Division status at Finn Park left him with ‘a terrible feeling.’

Limerick’s quest to complete the most unlikely of escapes was left in tatters after the Blues suffered a dramatic 2-0, extra-time, defeat to Finn Harps on Friday.

Afterwards bitterly disappointed Limerick FC manager Russell said: “It’s a terrible feeling that all the effort that has been put in hasn’t managed to get us what we wanted. It is hard to take. It’s hard to put into words at this time how everyone is feeling. It is just disappointing more than anything.

“It was a horrible game. It was a game full of stop-start, free-kicks, long throw-ins. The pitch was shocking, soft, very difficult, the ball bobbling over peoples feet. It made it difficult in many ways. We had a couple of chances that we should have taken. If you look back to the Markets Field game in the first leg with the amount of ball we had, we needed to finish off a few more chances. But it didn’t happen for all those reasons as well.

“We just fell short. I am just as gutted as anybody.

“Look, maybe it was meant to be for them this time round. We congratulate them on their efforts, but it is hard to take from a Limerick point of view.

“I genuinely believe the players would have had a lot to offer the Premier Division next year. But we have to take stock now and see what is best for the club. It’s a case of looking to get back (into the Premier Division) as soon as possible and building on what the Markets Field has to offer, the support, the potential of the club that can take it to another level.”

Russell said it was very difficult to start looking ahead to the club’s return to the First Division in 2016 in the immediate aftermath of their relegation.

“It is very difficult to look beyond tonight at this moment. One thing for certain is that Pat (O’Sullivan) the Chairman has Limerick FC in his heart. I would dread to think where the club would be if he hadn’t come on board in the past number of years. He has brought the club back into the Markets Field. He wants the club, very badly, to fulfil all the potential that it has.

“When you do take stock of where the club has been, not just last year, but for the past 25 years, and what it has failed to achieve, now that it is back in the Markets Field, it is a case of a new dawn. It is trying to build on that and hopefully build on what we achieved in the second part of the season.”