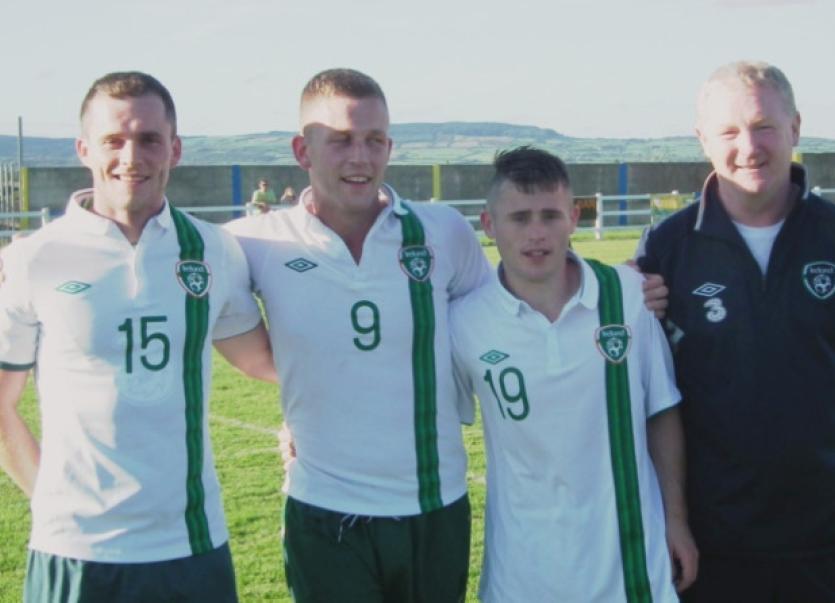 Pat Sheehan reports on the International Junior Soccer tournament hosted in Limerick at the weekend where Ireland came out victorious.

Pat Sheehan reports on the International Junior Soccer tournament hosted in Limerick at the weekend where Ireland came out victorious.

The Republic of Ireland were crowned champions of the Umbro Quadrangular Tournament following a hugely successful event hosted by the Limerick District League over the weekend.

Great credit is due to the Limerick DL in vying to have the competition played in Limerick and there was universal praise for all involved in the event and Gerry Smyth’s side put the icing on the cake with some scintillating football.

Pike Rvs, Janesboro and Fairview Rgs made their facilities available for the games and all three along with Jackman Park looked resplendent for the large crowds that turned out for each game.

Ireland opened their campaign against the holders of the trophy in the Pike Club and showed the grit and determination needed to get the required result.

Things were not going to plan after ten minutes when John Tierney hobbled out of the action but on 39 minutes Shane Waters played his ‘Boro team mate Shane Clarke into the area where the Scottish keeper Kelly was adjudged to have fouled the Limerick man.

The game took a dramatic turn right on half time when Richie Barr looked like his shot from outside the box would level the game when Carrick keeper Adrian Walsh pulled off an unbelievable save.

With the Scots man still holding his head in his hands a long clearance was picked up wide on the right by Clarke and his first time delivery behind the last defender gave Keith Dunne the chance to score; 2-0 at the break.

The two goal cushion gave Ireland the space they needed and they controlled the second half.

Midway through the half a long kick out by Walsh was chased by Clarke and he intercepted and attempted back pass before being hauled down in the box for a second spot kick. Again the classy Walsh converted to seal the issue.

Sherriff YC player Darren Dunne deservedly picked up the man of the match award showing stamina that had to be seen to be believed.

Day Two saw the action switch to Janesboro for the hosts where they took on the Isle of Man and a first half blitz put the contest to rest.

Fielding much the same side as the first game Ireland got off the mark from a penalty kick and the same duo obliged; Clarke was upended and Walsh converted his third of the competition.

Clarke was denied a goal when a brilliant save by Sam Halliday turned the ball away. However from the resultant corner kick Paul Breen’s powerful header was touched home by Clarke.

Midway through the half Stephen Murphy’s free kick again found the head of Breen and another powerful header made it 3-0.

Mark Townley and Stephen Murphy added further goals in a second half that saw Shane Waters dazzle the crowd with a man of the match award.

The Republic of Ireland beat their Northern counterparts in the final game to finish the tournament with a 100% record.

St Michaels Paul Breen headed in the only goal of the game midway through the half.

The winners looked obviously tired as the game progressed but a superb defence dominated by Breen and captain James Walsh (winning his 80th Cap) held on for their third successive clean sheet.

Shane Clarke had a couple of good chances but North keeper Steven McKay was up to the challenge.

Clarke and fellow Limerick player Shane Waters turned in another impressive 90 minutes and while Paul Breen won the official man of the match tournament, an equal case could be made for Sheriff’s Darren Dunne who was again super in the middle of the park.