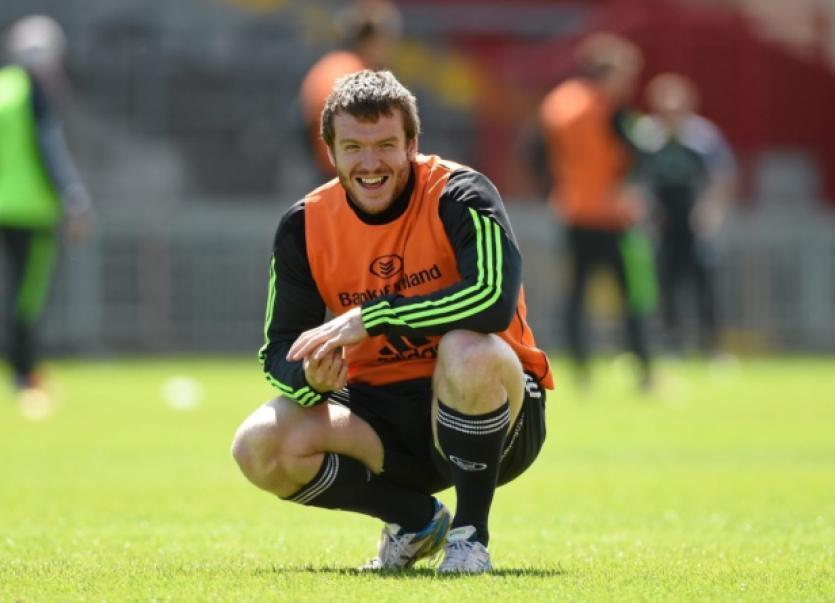 MUNSTER have been boosted by the return to fitness of several key squad members ahead of their opening pre-season friendly against French Top 14 side, Grenoble, at Thomond Park on Friday night, 7pm.

MUNSTER have been boosted by the return to fitness of several key squad members ahead of their opening pre-season friendly against French Top 14 side, Grenoble, at Thomond Park on Friday night, 7pm.

Munster’s fit-again South African winger Gerhard van den Heever is set to make his return to action on Friday night, while coach Foley also revealed that hooker Mike Sherry is close to pulling on the red jersey once more.

Foley said: “We’ll hopefully see Gerhardt on Friday night. With Mike I’m probably going to look at a game further on just with the length of time he’s been out.

Ahead of the start of the new season, Munster have also been boosted by the return of vastly experienced former Irish international scrum half Tomas O’Leary from London Irish this season.

Coach Foley says O’Leary experience is a valuable asset to have available.

“Tomas is a character. He’s a guy that before he left here a few years ago, was selected on a Lions tour, the Irish scrum half and it’s great to have him back a guy with that level of experience and that level of class around the place and he also keeps people in check and that’s always a good way to be.”

Munster will also hand a debut in the coming weeks to their former Auckland Blues centre Francis Saili who has joined up with the province. Munster had been anxious that Saili arrive before the start of the ITM Cup competition in New Zealand.

Foley said: “We were looking at whether we needed to get World Cup cover in, but we managed to negotiate an early release and we’re fortunate enough for Francis to be over here and training well. Hopefully we’ll see him in a few weeks.

“He has obviously moved over here last week and he has got to catch up on sleep and stuff like that. We want to make sure he’s settled in, he gets to know the lads and make sure he’s got the calls and we’ll see where he goes from there.

“As for Mark Chisholm, we are waiting on a work permit and hopefully that’ll get done and we can get him over as soon as possible. He will bring athleticism, power, size, leadership, experience and a freshness that he’ll be with us all the time.

“So hopefully we can build momentum on top of that.”