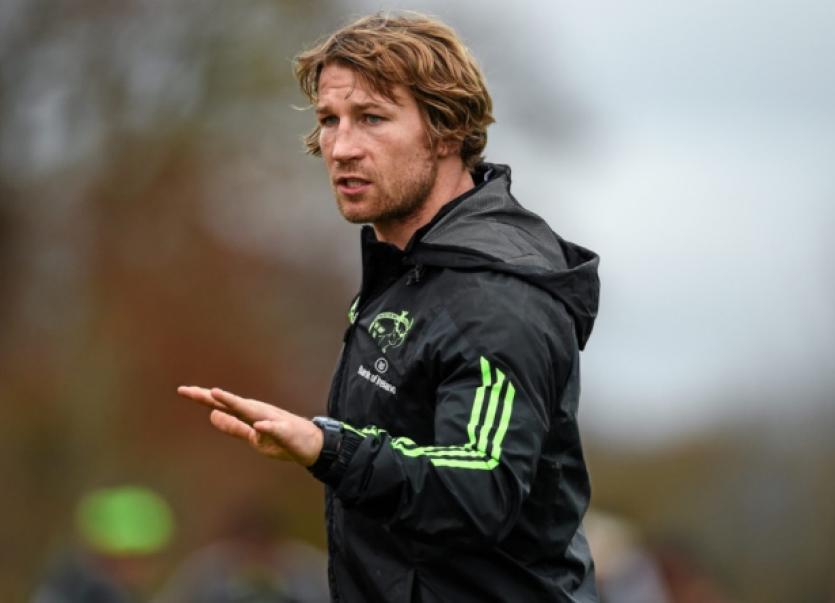 IT’S lunchtime Monday at the UL Sports Bar - less than 48 hours after Munster’s stunning European Champions Cup defeat at the hands of Clermont Auvergne - and the festive tune ‘It’s beginning to look a lot like Christmas’ is playing in the background.

IT’S lunchtime Monday at the UL Sports Bar - less than 48 hours after Munster’s stunning European Champions Cup defeat at the hands of Clermont Auvergne - and the festive tune ‘It’s beginning to look a lot like Christmas’ is playing in the background.

Jerry Flannery doesn’t appear to notice the background music as he takes his seat for an interview. Still six days to go to Munster’s return match at the Stade Marcel Michelin, but Flannery already has his game face firmly on. Munster on the verge of exiting the European Cup before December is out, then - Bah-Humbug to that!

Former Munster and Irish hooker Flannery retired from rugby aged 33 in 2012 due to troublesome calf injuries.

Rather than wallow in self-pity, Flannery pursued a Masters in Sports Performance at UL, before spending a year at Premier League giants Arsenal as a strength and conditioning coach, as well as his involvement with Maximum Media, punditry work with TG4 and finally his return to Munster as scrum coach.

On Sunday, Flannery returns to the bear pit atmosphere of the Marcel Michelin, the venue where he picked up a suspension in January 2008 after it was ruled he had stamped on Julien Bonnaire during the province’s Heineken Cup clash with Clermont. The ban was later halved to four weeks, but Flannery remains adamant that the incident was accidental.

“I announced it in March 2012, but the most difficult thing for me was the 12-18 month period beforehand, maybe the 12 months when it only became a real issue.

“When I initially hurt my calf I didn’t think that was going to be any big deal. Unlike a leg break, for instance, I never thought the calf would get where it did.

“The first six months was frustrating and then the last year was quite dark. I just missed being able to play with the lads more than anything. Day to day, you are trying to earn the respect of your peers whether they are younger players coming up in the academy, you are always trying to prove yourself.

“When you cannot be part of it you feel your are very much on the outside looking in. I found that very hard.”

“I finished my Masters in February 2013. It was around April I got a call from Des Ryan who was the head of Sports Science in Arsenal. He had previously been one of my coaches when I was at Connacht.

“We worked with the Academy. I would have had 8-10 players who were ‘my’ players, who I would have looked after. You would do a little work with first team players too if they were looking after specific sessions.

“And Working with the reserves you have a lot of first team lads there. It was a good crossover.

“Going over to Arsenal, I would have had a predisposed idea in my head as to what footballers were like, that they were over-paid, primadonnas who didn’t work hard, but that changed completely.

“I saw just how difficult it is to make it as a professional footballer. It’s such a competitive career to get into that for lads to be in it is the equivalent to them winning the Lotto. Sure, you are going to get d***heads in football, but you are going to them in all professions. I came away with a lot of admiration for them.

“I am a Chelsea fan all the time. They gave me a bit of stick when I went over first, but one of their physios is also a Chelsea fan. But when you are working for the club, you will have a soft spot for them, watch out for them. I am still Chelsea!”

“MY girlfriend was finished her degree here, and we were looking to move back over for 12 months to Arsenal.

“Then I got a call from Axel to say he was putting his coaching team together and whether I would be interested.

“I was obviously very excited straight away. But there were two things for me. I wanted to make sure I could do a good enough job because I am a Munster fan first and foremost and I don’t want to come back if I feel that I can’t really add and help the squad. Saracens are very close to Arsenal and I would have spent quite a bit of time going up there, chatting to Mark McCall and Phil Morrow.”

BEING A HOME GROWN COACH

“It is something I definitely considered when I was offered the job. As a player you get a finite period to play with Munster and when that ends, it ends.

“That is what people will look back on. I knew I had a certain amount of equity built up from my time playing with Munster. That was really important to me. You have to take risks and I was putting it back on the table returning as a coach. I am going to give it my best shot. Beyond being a job, I love Munster rugby.

“For me, when we win with Munster rugby, whatever small part I played during the week, I feel a part of it and the knock-on effect is that my mother and father are delighted, so too are all my friends and family. Everyone is so much happier.

“I know it is all down to the players, but I love playing whatever small part I can. There is added pressure when you are local, but it is a good pressure, the same as when I played with Munster.“

“We went over and we got the result that we needed (a losing bonus point). At one stage it looked very, very sticky when we were down. But again it is about persistence and belief in what you are trying to do. We got what we needed out of there.

“In terms of me getting suspended, it wasn’t malicious. I didn’t even know he (Julien Bonnaire) was there.

“I remember we had a line-out just after it and Peter Stringer said ‘Jesus, Flah, mind your feet’ and I didn’t know what he was talking about. I played the whole game now knowing anything.

“I rang home later and asked one of the lads. They said it looked like I stood on Bonnaire’s head. I met Bonnaire the following year, apologised and said it was an accident. I met him after the game last weekend too. It genuinely was an accident. My leg was being held. The citing committee didn’t believe me and they suspended me. I just thought that was b******t!. That was it. I broke my hand the following week against Wasps. My hearing was held after the Wasps game.”

“Obviously, we are under the pump now after last weekend, but it is only half-time in the Clermont series.

“We were very disappointed in how Saturday went for us, leaving them in for some early scores and uncharacteristic errors. But these are things that are within our control. We are not going to bitch about the size of their squad or the quality of their players.

“This is the European Cup and this is what you are going to come up against. Some of our players may not have the same profile as some of the Clermont squad but I feel there is real undoubted quality here. It is a case for us now to circle the wagons a little bit and have a real good look at what we can do better for the weekend, every single day try and get better as we lead into Sunday.”

“The difference is that while everyone was disappointed and we shipped a few injuries, which you never want to see, normally when you a lose a game you may have to wait five months to play that crowd again.

“After we came back in on Saturday night, Axel spoke with real conviction as he always does, saying ‘it’s half time’ and that is what this is. We know we made some mistakes, but these guys are human, it’s still in our hands, it’s half-time. We have eight days to prepare. If we prepare every single day better than Clermont do, we can go over and do exactly what Clermont did to us.

“What happened to me in 2008 over there has no bearing on my desire to get a result next week. It is what we need to do if we want to stay alive in the competition.

“I came back here because I want Munster to win a European Cup. That is the reason I am back here. I want to try and help Munster and do whatever I can to help the players we have to be the best players they can be and to contribute as a coach to try and winning another European Cup.

“That is what the standard is at Munster. We put ourselves under the same amount every week because we always want to win.

“The only difference is that externally the media don’t see us as having much of a chance going over to Clermont given their track record there. For us, and to stay alive in the competition, a result is paramount.”