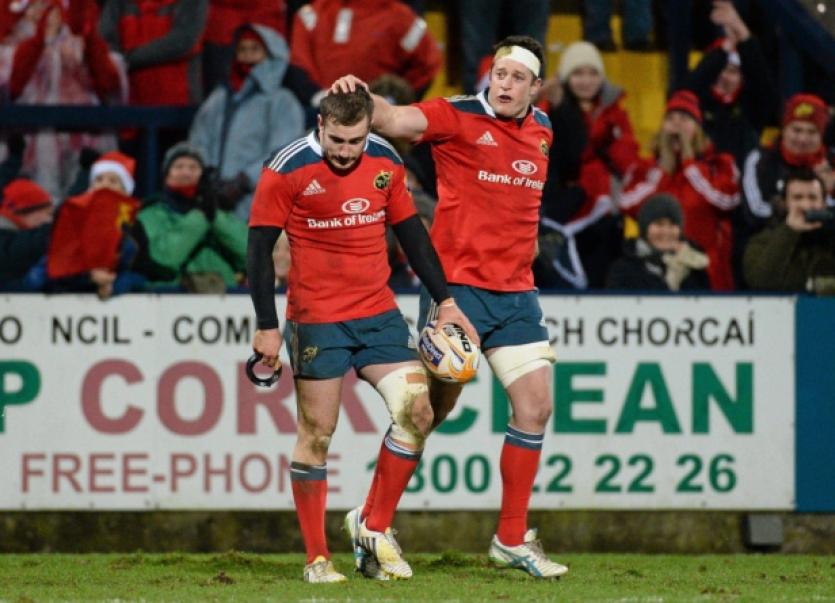 MUNSTER head coach Rob Penney continues with the squad rotation for tonight’s (December 27) RaboDirect PRO12 clash with Connacht at Thomond Park (7.15pm) as out-half JJ Hanrahan is the only survivor from last weekend’s starting XV which dramatically defeated the Scarlets to start the inter-provincial clash with Pat Lam’s side.

MUNSTER head coach Rob Penney continues with the squad rotation for tonight’s (December 27) RaboDirect PRO12 clash with Connacht at Thomond Park (7.15pm) as out-half JJ Hanrahan is the only survivor from last weekend’s starting XV which dramatically defeated the Scarlets to start the inter-provincial clash with Pat Lam’s side.

Penney’s high-flying Munster side are bidding to record ninth straight win in all competitions, but the Kiwi is not underestimating the size of the challenge facing his charges against a Connacht side which moved off the bottom of the PRO12 table when defeating the Dragons last weekend.

Penney said: “It’s always a difficult match, I remember vividly going to the Sportsgrounds last year at this time and we squeaked a win on a wet day and I suspect it will be no different on Friday.

“If you underestimate them, they will sting you and that’s another challenge this week. We’ve picked up a couple of results this year that we struggled to get last year which is great and heading into a tough game, a local derby match, the Connacht lads would like nothing better than to come here and smack over Munster.

“It’s what the 15 guys on the track are thinking that’s the important thing so, as a management group, we’ll prepare the same,” he said.

“Our detail will be as diligent as it always is and the key thing is that the players embrace that and I think they’re getting a bit of confidence in knowing they can win the tight ones.”

Front row replacements from Munster’s weekend win over the Scarlets, Niall Scannell and John Ryan, move in to the starting line-up joining James Cronin for the round 11 clash, with Scannell making his first start at this level.

Donncha O’Callaghan also makes the step up and starts next to Dave Foley in the second row while Paddy Butler marks his return from injury with a starting place in the back-row, joining Sean Dougall and James Coughlan who captains the squad for the second time this season.

Hanrahan is joined in the half-backs by Duncan Williams this week with Gerry Hurley named in the replacements for the first time this season. The Cork Con man is line to make a return to league action against the same opposition he last played exactly six years ago.

Garryowen’s Ronan O’Mahony, who scored the winning try in the 83rd minute against the Scarlets, is named in the new look starting backline with Johne Murphy joining James Downey in the centre partnership for the first time this season.

Munster Rugby have nominated tonight, December 27, game as this year’s ‘Charity Match’ in a bid to raise funds and awareness for our two nominated charities for season 2013/14, Mid West Spina Bifida and CUH Charity.

To support the initiative, supporters are being asked to purchase a match programme for €5 with €1 from each programme sale donated to help raise much needed funds for the charities. At halftime, an exclusive, signed “Charity Match Munster Jersey” will be presented to representatives of each of the charities.

Mid West Spina Bifida will also be selling the bands, embossed with “Munster Rocks”, on Friday night at Thomond Park and they are asking all supporters to row in and purchase a band for €2 in order to help raise much needed funds for the charity. Bands will be sold prior to, during, and after the match.