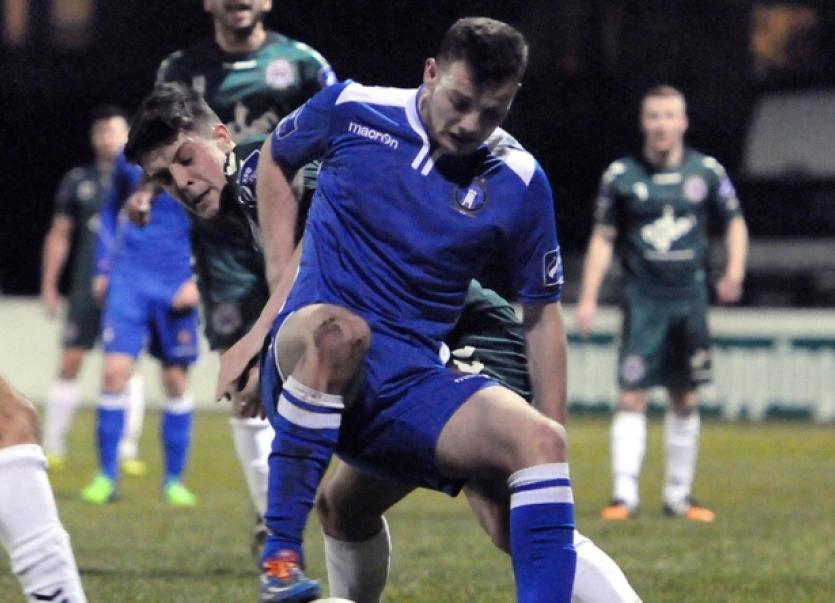 LIMERICK FC will face St Patrick’s Athletic or Dundalk in the semi-finals of the Under-19 National League play-offs after the Blues scored a dramatic penalty shoot-out victory over Sligo Rovers after a 10-goal thriller.

LIMERICK FC will face St Patrick’s Athletic or Dundalk in the semi-finals of the Under-19 National League play-offs after the Blues scored a dramatic penalty shoot-out victory over Sligo Rovers after a 10-goal thriller.

Seán McSweeney was the star of the show as his wonder goal in extra-time kept Limerick’s Under-19 National League dream alive, with Killian Brouder going on to score the decisive penalty after a dramatic 5-5 draw at a rain and windswept Showgrounds on Saturday.

Limerick fell behind inside two minutes when Liam Flatley struck, but by the half-hour the Blues were in control, leading 3-1 through goals from McSweeney, Yoyo Mahdy and Liam McCartan.

Sligo were within touching distance soon after when Brian Morley netted, but Limerick restored their two-goal cushion when Killian Brouder fired in after a corner was only half cleared, past the hour-mark.

Still, there was plenty of life left in the game and substitute Paul Doyle brought it back to 4-3 with a long-range free-kick. Blues captain Paudie O’Connor was harshly dismissed on 84 minutes, and Sligo grabbed an equaliser right at the death through Morley to force extra-time.

The hosts then put one foot in the semi-final with Gary Armstrong’s penalty, but Limerick recovered and McSweeney supplied an incredible goal from distance which went in off the crossbar to make it 5-5 on 103 minutes.

Goalkeeper Tommy Holland ensured there would be a shootout after he denied Mikey Place three times – the first one in particular a superb stop – before Limerick went down to nine after vice-captain Val Feeney was sent-off.

In the shootout, Limerick were perfect from five, while Holland denied skipper Ross Taheny midway through it as they sealed a place in the last four for the second season in succession.

Limerick now prepare for next weekend’s semi-final where they face a home tie against either Saint Patrick’s Athletic – who they met at that stage last season – or Dundalk, who clash in Dublin on Wednesday night.