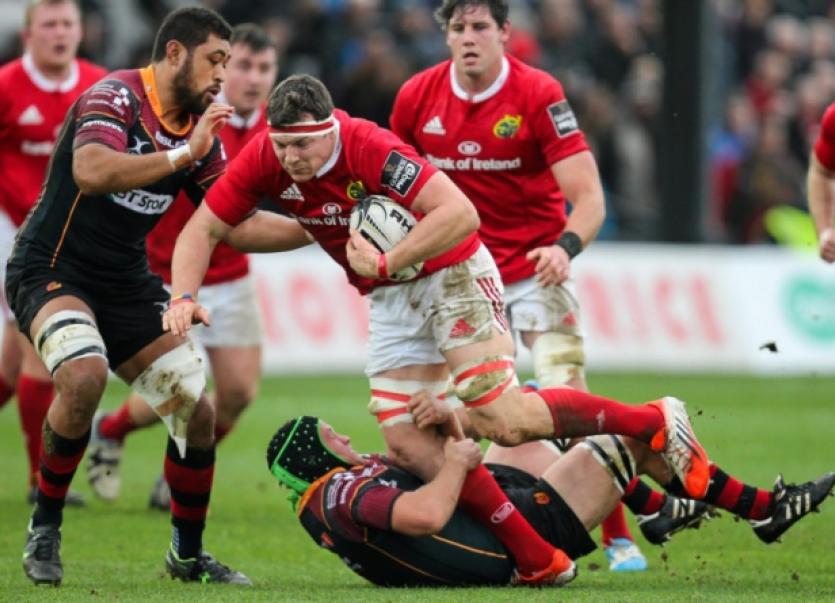 MUNSTER’S hopes of bouncing back to winning ways in the Guinness Pro12 were shattered in a disappointing 22-6 defeat to the Dragons at Rodney Parade on Sunday.

MUNSTER’S hopes of bouncing back to winning ways in the Guinness Pro12 were shattered in a disappointing 22-6 defeat to the Dragons at Rodney Parade on Sunday.

Anthony Foley’s charges had travelled to Wales seeking a boost prior to their crucial back-to-back Champions Cup fixtures with Leicester Tigers. After a much-changed Munster side had failed to covert two clear-cut try-scoring opportunities in the opening half, the Welsh region stamped their authority on the game in the final quarter.

The teams were level 6-6 at half-time, but the home side racked up 16 unanswered points in the final quarter, including the match-clinching try from second-row Rynard Landman in the 77th minute, to secure only their second victory in 10 meetings with Munster.

The defeat will leave Munster with plenty to ponder ahead of the first of the mammoth back-to-back Champions Cup fixtures at Thomond Park on Saturday, 7.45pm.

Munster coach Foley made 10 changes from the side which lost to Connacht for this trip to Newport. It remains to be seen whether many of the players who started here will feature against Leicester, but the likes of Ronan O’Mahony, David Johnston, Shane Buckley and Robin Copeland caught the eye in an otherwise frustrating Munster display.

The side traded penalty goals to be tied, 3-3, after 14 minutes with out-half Rory Scannell on the mark for Munster

Munster had a ‘try’ chalked off in the 22nd minute when the TMO found Simon Zebo guilty of a double movement before touching the ball down. The opening was created by a terrific break from full-back Ronan O’Mahony and superb off-load by Dave O’Callaghan.

And Munster butchered a glorious try-scoring chance in the 26th minute when Argentine full-back Amorosino knocked the ball on over the try-line when opting to go on his own rather than pass to Zebo who was in splendid isolation outside him.

Munster were made pay for their lack of cutting edge when Jones kicked a second penalty for the Dragons on 31 minutes.

And Simon Zebo saved Munster from conceding a try soon after when he pulled off a crucial cover tackle on full-back Carl Meyer.

The visitors drew level in the 38th minute when Scannell landed his second penalty goal after the Dragons had drifted off-side.

The Dragons regained the lead in the 44th minute when out-half Jones landed a terrific drop goal.

The fit-again Tyler Bleyendaal, who came on for out-half Scannell, missed a great opportunity to draw the sides level when pushing a 53rd minute penalty goal wide of the uprights.

The Dragons wrapped up the victory three minutes from full-time when Zebo gambled on making an intercept and Faletau set up Rynard Landman for the match clinching try. Jones duly converted and replacement out-half Jason Tovey increased the Dragons winning margin to 16 points with a last gasp penalty.